At long last, the day I'd been waiting for ever since October: the Leafs versus the New York Rangers at the Air Canada Centre.
My dad had procured some very good seats for us and presented me with the tickets all the way back at Thanksgiving. I promptly hid them in my underwear drawer. Anyplace else, I figured, I'd lose them.
He had taken me to the Air Canada Centre once before: March 17th, 2002, against the New York Islanders. (Dad: Next time it'll have to be the Devils: then we'll have covered New York City!) We had sat about twenty rows from the tippy-top of the building then. Although there are no bad seats at the ACC, some seats are definitely better than others: these promised to be.

Everybody at work seemed to be a bit envious. Well, one guy wasn't. Jeff asked me what I was doing this weekend. "I'm going with my dad to a Leaf game", I wheedled. "WRONG ANSWER!" he yelled.
"What are you, some kind of Habs fan?"
"Naw. I just hate the Toronto Maple Leafs."
"Okay, well, then I'm going to a NEW YORK RANGERS road game!"
"That's better! You're learning!" he chuckled.

Our first stop was the Hockey Hall of Fame, under extensive renovation. We tried our hand at play-by-play (Dad was pretty good, I was pretty bad) and had a few rounds of hockey trivia, one of which I won going away: 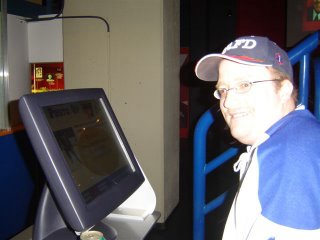 We watched one movie covering the 1987 Canada Cup and another on the career of Bobby Orr (who, like my dad, is from Parry Sound: one of my most prized possessions is a picture of myself, at six months old, cradled in the arms of the Hall of Fame defenseman). Then, off to slunch at Richtree Market ... hey, if the meal between breakfast and lunch is called "brunch"...

This Richtree place is something else. Picture the most opulent cafeteria imaginable, and you'd be close. As you enter, they give you a shopping card. You grab a tray and move from station to station, selecting things you want: each swipe of the card adds to your tab. What a selection: steak to sushi to stir fry to struedel to salad, and that's just the esses. All of it prepared fresh, right in front of you. One of the more memorable meals of the year. 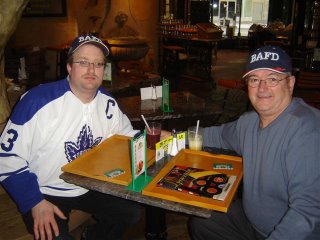 Then, on to the game.

On the way in, we were almost selected to be on Hockey Night In Canada, cheering on the Leafs and Team Canada. As it was, we are barely visible in the background of the segment in our Britt and Area Fire Department hats. (I kid my Dad that the department should be called the Britt and Area Rescue and Fire/Emergency Department.)

Nineteen rows from ice level, near the top of the golds, halfway between the Leafs defensive blueline and the high slot. Almost perfect seats. 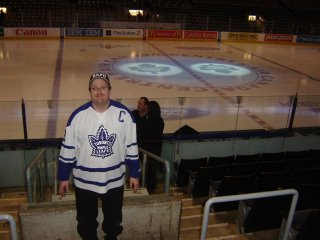 We were in those seats over an hour before puck drop. The atmosphere grew steadily more electric as game time approached and the arena filled up.

John McDermott came out to sing the anthems...obviously a good omen. He's probably my favourite singer, and this was, to my knowledge, his first time doing anthem duty this season.

Opening faceoff. There are two big differences between seeing a game live and watching at home. One: in the stadium, the game goes by in an absolute blur. Two: it's nothing short of incredible how quiet eighteen thousand-plus people can be. Unless the Jumbotron specifically encourages noise, you can hear the ice freezing. This is Toronto, after all.

One noise I can certainly do without is coming from my right: two girls chattering away through the entire game about everything but hockey. With seats this good--and expensive--I marvel at what seems to be the practised insolence of the affluent.

Another noise I can do without is the sound of puck bulging twine--the wrong twine. Four times before we manage the same feat once. (Okay, Rich Brat on my right did make one remark about hockey. With a glance at Staffan Kronwall, she muttered "oh, look, he lost the puck all by himself, isn't that clever?" Despite myself, I snickered...

The final score was Rangers 4, Toronto 2. Our goals were supplied by McCabe (of course) and Allison, while Jaromir (anagram: Mario Jr) Jagr was a one-man wrecking crew for the Rangers. A good game though: tonight, the Leafs tried. As a long-suffering fan (Stanley Cup Final appearances during my lifetime: uh, zero), that's all I ask of them.

Even though we lost, I really enjoyed the game. Thanks, Dad, for the tickets and the company!

i'm not sure if you were aware but john mcdermott is going to be perfomring a valentines day dinner show at the waterloo stage theatre on king street.. you and eva would have an awesome time i'm sure