Only if your definition of "right" includes assault, uttering death threats, and general abuse.

Virtually my entire career to date (nearly a quarter-century) has been in retail of one form or another. Not every job held the promise/threat of interaction with customers--working in a McDonald's kitchen is one *beep*ing thing after another, but those *beeps* generally represent machines demanding attention, not customers hurling profanity at you. (When you're on what McD's calls "lot and lobby", however, you can expect all manner of ill manner...)
7-Eleven is an altogether different story. There, depending on the time of day, abusive customers can actually be the norm, and "nice" customers very rare. But most of the nastiness stems from alcohol and testosterone mixing together and curdling. For my purposes here, that doesn't count: the maliciousness isn't intentional. It's simply university students--the leaders of tomorrow--being assholes today. Given the sheer volume of tomorrow's leaders I served over a period of five years, I can't say I was at all unhappy to escape and light out for Price Chopper.

Ken, if you keep uncovering assholes under every pair of jeans, perhaps the problem isn't them, but you?

Possible, but unlikely. My customer service skills were nationally recognized at 7-Eleven; I've undergone all kinds of formal training, and I'd like to think I'm pretty good at my job. I've certainly had enough practice at it. What 7-Eleven called IRAACs--Irate, Rude, And Angry Customers--in this era of entitlement, they're everywhere.

One of the worst incidents I've been through happened when I was working at a little variety store/gas bar two doors down from my house in Ingersoll, Ontario. An old, rickety pickup truck pulled up to the pump one evening and a man with a, shall we say, certain tinge of red to his neck bounced out of its cab and lifted the gas pump from its holster, setting off an annoying meep-meep-meep-meep! noise in the store. That noise is designed to get you to acknowledge the customer's presence as quickly as possible and hit two buttons that will start the fuel flowing into his tank. Which I would gladly have done, but for the fact his engine was still running. As I'm pretty sure most people know, it's illegal to pump gas with your engine running...illegal, and possibly dangerous.
Rather than talk into the speakerphone--which dehumanizes your voice--I went outside to explain to the customer that he needed to turn his engine off before he could fill up. He told me if he turned his engine off, there was a good chance he wouldn't get it started again. Not my problem, I thought but did not say.
"I'm sorry, sir, but I can't allow you to dispense gas with your engine running. Perhaps we can get someone to give you a boo--"
My voice was drowned out in a torrent of cussing that went on for some time. My colleague in the store was busy at the register and probably quite fed up with the meep-meep-meep-meep!. She was also under the mistaken impression that I was dealing with somebody reasonable, or at least had made him see reason. Without looking too closely, she acknowledged. The pump went live.
And the customer, still cursing a blue streak, grabbed the gas pump, aimed it at my head, and depressed the trigger. A couple of cups of of gasoline fountained out and sprayed me: face, neck, arms, chest.
All coherent thoughts but one vanished. The one remaining thought was fuck, he's gonna throw a match. I high-tailed it out of his range and back into the store; he replaced the pump, jumped in his truck, and peeled out.

What happened a couple of days ago can't hold a candle to that--or it'd explode--but it was pretty bad, nonetheless.

You don't get out-and-out evil customers in our store all that often. It's a discount banner, but the store's in an upper-middle class area. Rudeness abounds, but it's unthinking, careless rudeness: people checking out and leaving their carts blocking the exit for everyone else; frozen food deposited everywhere but in a freezer; store employees treated like walking directories instead of human beings, that kind of thing. Low-grade background discourtesy very quickly becomes just a part of the job, easily tolerated, almost expected.
So here I am, stocking Nestle sundaes off a U-boat that looks a little like this... 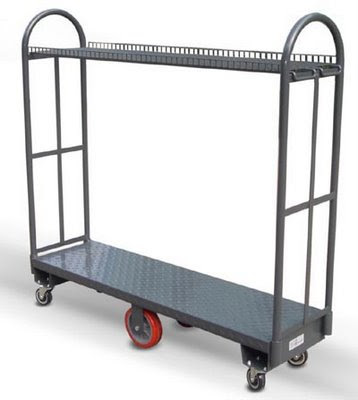 ...only the top shelf is level with the cross braces about halfway up. I'm down on my knees (where I spend the majority of my day, it seems: I've had about ten thousand people ask me to "say one for me!"), with the boat in easy each as I stock the bottom shelf of the freezer. An elderly gentleman (not so gentle, as it turns out), appeared, and stood up against my ice cream bunker, a good four feet on the other side of my U-boat. Intent on stocking, I reached up and behind, grabbing another box of sundaes. I got that box okay, but the one beneath it slid out and fell to the ground, skittering across the floor and coming to rest against the man's foot. He jerked and said fuck under his breath. Right then, I knew I was in for something special.
I immediately stopped what I was doing, of course, apologized, and asked the man if he was all right. I'm not sure the question entirely escaped my lips before the tirade started.
"You people are always putting shit in the way. And now you're throwing boxes at me?" Belligerance I can deal with: being flatly accused of "throwing" a box put me a titch on edge.
"Sir, I didn't throw the box at you. It just slipped, and I'm s--"
"This--" he gestured at the U-boat "--is blocking the aisle. You people are all fucking assholes here, making it impossible to shop."
Oh, boy, this is going downhill fast, isn't it?
"Sir, where would you like me to put this U-boat?" Damn it, I thought, if that box of sundaes hadn't fallen, he probably wouldn't have even noticed the U-boat that's suddenly 'in the way'.
"If I put it over here, it's still in your way. If I pull it any closer to myself, I can't stock these shelves."
"I don't care", he snarled. "Your old manager wouldn't have tolerated this shit. He knew how to run a God-damned store."'
Christ, now I've got to accept abuse on behalf of my boss.
"Sir", I tried again, "I've been here seven years--"
"--and you've forgotten every bit of training you ever had. Shit-for-brains."
I give up. No getting through to this one.
"What's your name?" he demanded.
"Ken", I said.
"Last name?"
"None of your business." I ain't givin' out my last name to nobody, least of all this headcase.
"Oh, yeah, chickenshit? Well, I'll call your head office. I'm sure they know who you are."
And he stormed out.
By the time the letter came down from head office later that day, I had "thrown a box" at him, "knocking him to the floor". I "offered no apology", I was "rude" and "uncaring". We had a "shouting match". (Pretty one-sided match, I'd say: I barely raised my voice.)
One wee little problem: that entire incident was caught on camera. In fact, I couldn't have asked for a better camera angle. You can clearly see how the box slipped, and how it hit the ground before it came to rest up against the complainant's foot. What you can't see is him getting knocked to the floor. In fact, you can't even see him move.
Nevertheless, I was a little bit worried, because this customer had bypassed our store manager and went straight to the higher levels. There are people up there who are new to the chain and who don't know me from Adam: would they believe these preposterous allegations? It's a good thing that camera's there.
The D.M. batted the problem back down into my store manager's lap, and he called the customer and took even more abuse.
At one point he was asked if he was Egyptian.
"What does that have to do with anything?"
"Because you're in denial", the guy cracked.
Wow, all that and witty, too!
The boss invited this man in to show him just where all these aisles are blocked--which seems to be his pet peeve. The funny thing is, our store is currently about as bare as it ever gets. It's true that we sometimes have to store pallets of product on the sales floor--our backroom is wholly inadequate for the volume of sales we do--but we of course make sure carts can pass all around anything we put down. It'll be interesting to see if this gentleman shows up...although I hope I can be excused for scurrying off the floor. I have no least desire to deal with him ever again.
Meanwhile, if I ever get to thinking I'm alone in the world of retail, that everyone else gets treated with respect, I go here: NotAlwaysRight.com. They've got real-life stories there that will make you laugh...or cry...or scream. And after a good dose of this site, my job seems so much better...
on July 30, 2008

Security cameras are a good thing, glad it was caught on tape man.

Oh Ken I hear you. I worked retail myself (grocery/gas jockey) for 6-7 years.

My wife has worked almost exclusively in retail (clothing) and has many horror stories of her own.

When talking with people, and they find she's a stay at home mother, they always ask, don't you miss work?

Naw, I don't think she misses it too much.