When I was much younger, my dad took me to a place called Depot Harbour. It's a ghost town on the shores of Georgian Bay. Eighty short years ago, the town was a bustling, thriving home to more than 3000 people.

Then the Great Depression happened. The grain trade dried up, the railway closed down, and the town withered and died.
We weren't there long, but the visit made a deep and lasting impression on me. Little wonder: there's something haunting and heart-wrenching to regard former church steps leading nowhere 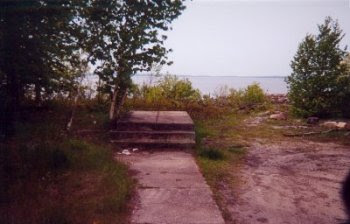 or the ruins of a Roman-inspired railway roundhouse. 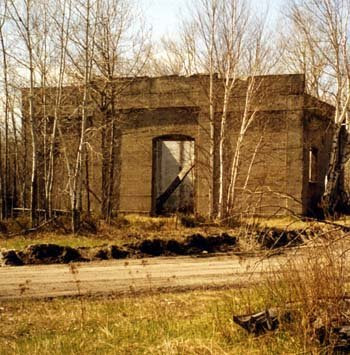 (If you're interested, here's a good site showing what Depot Harbour looked like in its glory days.)

This has certainly been a historic week on Wall Street. The morbid jokes are starting to make the rounds...

What's the difference between Wall Street in 1929 and Wall Street in 2008?
In 2008, you can't open the windows.
I'm reading an article in Forbes that poses the question "Is the U.S. Going Broke?" I think it's safe to conclude the U.S. passed "broke" a long time ago and is now heading for rack and ruin. Looking at this objectively, I don't know how long the Federal Reserve can go on bailing entities out. At some point it's going to need to be bailed out itself...and who's willing to do that? Who is even able to do that?  And at what price? Are Americans willing to be, in effect, indentured servants of a foreign nation?
And all because a bunch of suits dreamed up a way to make themselves phenomenally rich by offering too-good-to-be-true mortgages to people too shortsighted to notice. This is the crossroads where rampant greed and deregulation meet, folks. Look around. Not a pretty area, is it? Deserted--all the houses are abandoned and foreclosed. Odds are they'll be sold for scrap lumber, since there are no buyers at any price: who wants to live in Depot Harbour?
on September 17, 2008

Here, here. It's sad and scary at the same time. People have this idea that it can't get much worse ( I think even i said that) but IT can and MAY get worse.

Keep that extra bedroom ready for me and family ;o)

I read an interesting post today that argues that the problem is that we went from a philosophy of tax and spend to borrow and spend. And I agree Rocket, it can and will get much worse.