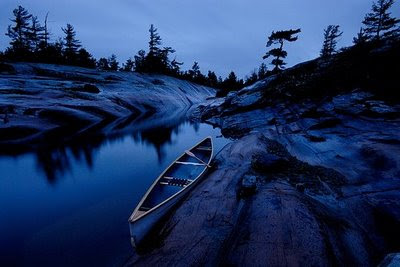 Anyone who's read this blog for any length of time knows how I feel about "up north". Going to my dad's place has always meant relaxation. Of everything: rules, restrictions, limits of time and space...tensions of every sort don't stand a chance in the magnificent isolation of Rainbow Country.
I just got back from five days up there. As usual, my feelings are mixed. I'm very grateful to be home--there are a few somethings to be said for sleep in one's own bed, and a great many more to be said for sleep and wake time with one's own wife--but if I could just transport bed, wife and home back up in the general area whence I just came...
I didn't do much up there. That's kind of the point, for me. The area around my dad's place has great fishing and hunting in season, the outdoors beckons, every season. To those who are susceptible to its call, it's pretty much paradise. I'm an indoors kind of person through and through, and it's pretty much paradise for me too. The sounds alone are intoxicating: the soft soughing of the wind through the trees on the far shore of the river; the trickling interplay of the wind over the water; the occasional call of a loon (or, if you're lucky, a wolf); even the boat traffic isn't as jarring as, say, the sound of a transport truck going by on your street in the city.
If the sounds aren't enough, there's the sights: 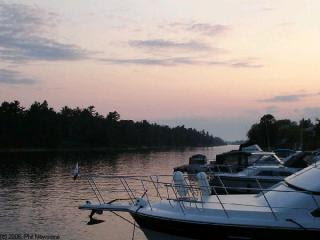 The mouth of the Magnetawan River

Along the Magnetawan
And the smells, which can't be adequately conveyed using mere words. Suffice it to say that the air in Britt is pure enough to be invigorating...and yet a day in it is, oddly, exhausting as well.
On Wednesday night, Dad enlisted me in the Britt Lions' can brigade. They collect pop and beer cans for the scap aluminum, which pays for a good deal of their community service through the year. I have to say I was stunned speechless by the sheer volume of cans, which have built up since January. I can tell you in words (sixteen hundred beer cans and probably close to ten times that many pop cans)...or I can show you: 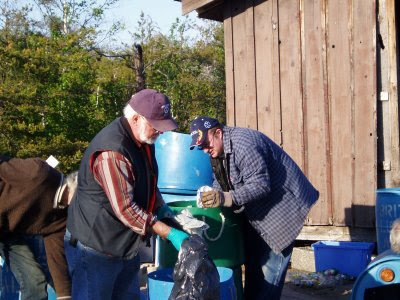 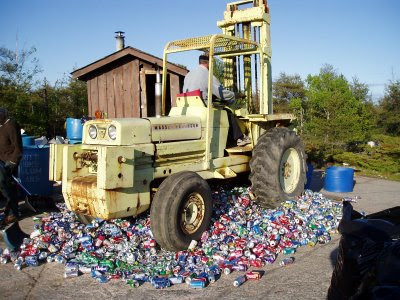 This was only the pop cans, and only the first batch.
The other highlight of the trip for me was a visit to French River Provincial Park. I came here last time up only to find the state-of-the-art Visitors Centre had closed for the season the day before. It was open this time: 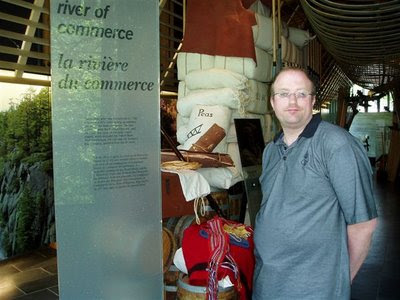 So serious...
The history of the whole area is something else that grips me. The French River, which is not too far north of my father's place on the Magnetawan, is one of Canada's Heritage Rivers. It was a bustling freeway thousands of years before the white man came in the 1600s and made it a linchpin of the fur trade. Sitting alone along the shores of these northern rivers it is all too easy to imagine those earlier times. It's almost like time travelling.
Time itself is elastic here. The city, with its rigid deadlines, might as well be on another planet. That goes double with my dad, who in his capacities as cop, volunteer firefighter and Lion has come to know just about everybody in town. He can hardly venture out of his driveway without meeting someone who wants to chat. As a child, I used to marvel at how many people my father could meet in the course of running one simple errand. That hasn't changed at all in thirty years.
And Dad's house could be a bed and breakfast establishment. It's practically one now: I'm far from the only person who values the company and the setting. My stepmother has been dubbed "the Martha of the North"...for good reason. Her cooking and hospitality are legendary.
I had, as always, a perfectly lovely time. Thank you, Dad and Heather, for the opportunity to take a break from life and spend some time with you.
on June 06, 2009

In Minnesota, we called it "up nort", solitude is sooo relaxing