Things your kids may never know about...

Inserting a VHS tape into a VCR to watch a movie or to record something.
Super-8 movies and cine film of all kinds.
Playing music on an audio tape using a personal stereo. See what happens when you give a Walkman to todays teenager.
The number of TV channels being a single digit. I remember it being a massive event when Britain got its fourth channel.
Standard-definition, CRT TVs filling up half your living room.
Rotary dial televisions with no remote control. You know, the ones where the kids were the remote control.
High-speed dubbing.
8-track cartridges.
Vinyl records. Even today’s DJs are going laptop or CD.
Betamax tapes.
MiniDisc.
Laserdisc: the LP of DVD.
Scanning the radio dial and hearing static between stations. (Digital tuners + HD radio bork this concept.)
Shortwave radio.
3-D movies meaning red-and-green glasses.
Watching TV when the networks say you should. Tivo and Sky+ are slowing killing this one.
That there was a time before ‘reality TV.’

Couple points here. If there was a time before reality TV, *I* don't remember it. The Phil Donahue Show premiered five years before I was born.
Also, it's funny just how quickly some of these things die. Or rather, how long they persist before suddenly disappearing. I last used a VCR about two years ago. We've got three of them--two of them are even hooked up!--but I can't think if I'll ever turn one on again.

Wires. OK, so they’re not gone yet, but it won’t be long
The scream of a modem connecting.
The buzz of a dot-matrix printer
5- and 3-inch floppies, Zip Discs and countless other forms of data storage.
Using jumpers to set IRQs.
DOS.
Terminals accessing the mainframe.
Screens being just green (or orange) on black.
Tweaking the volume setting on your tape deck to get a computer game to load, and waiting ages for it to actually do it.
Daisy chaining your SCSI devices and making sure they’ve all got a different ID.
Counting in kilobytes.
Wondering if you can afford to buy a RAM upgrade.
Blowing the dust out of a NES cartridge in the hopes that it’ll load this time.
Turning a PlayStation on its end to try and get a game to load.
Joysticks.
Having to delete something to make room on your hard drive.
Booting your computer off of a floppy disk.
Recording a song in a studio.
Joysticks! What I think of as a joystick hasn't existed in twenty years! Remember these? 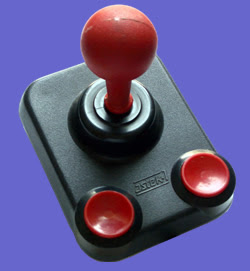 Now those were joysticks. Not the flimsy stickless monstrosities Nintendo introduced, which inexplicably spread industry wide.

NCSA Mosaic.
Finding out information from an encyclopedia.
Using a road atlas to get from A to B.
Doing bank business only when the bank is open.
Shopping only during the day, Monday to Saturday.
Phone books and Yellow Pages.
Newspapers and magazines made from dead trees.
Actually being able to get a domain name consisting of real words.
Filling out an order form by hand, putting it in an envelope and posting it.
Not knowing exactly what all of your friends are doing and thinking at every moment.
Carrying on a correspondence with real letters, especially the handwritten kind.
Archie searches.
Gopher searches.
Concatenating and UUDecoding binaries from Usenet.
Privacy.
The fact that words generally don’t have num8er5 in them.
Correct spelling of phrases, rather than TLAs.
Waiting several minutes (or even hours!) to download something.
The time before botnets/security vulnerabilities due to always-on and always-connected PCs
The time before PC networks.
When Spam was just a meat product — or even a Monty Python sketch.
Several things here I goggled (as opposed to Googled) at.
1) Phone books and Yellow Pages. I just used one last night. While I don't use them often, I can't imagine not having one accessible. Not everything is on the Net, you know.
2) SPAM (Shit Posing As Mail) is itself on the endangered list. I can't remember the last time something snuck through into my e-mailbox.
3) Road atlases: if they ever disappear, I'll miss them. Really, as far as I'm concerned, anything bound has an advantage over a screen. Particularly in a car: who's going to steal your atlas, huh?

Typewriters.
Putting film in your camera: 35mm may have some life still, but what about APS or disk?
Sending that film away to be processed.
Having physical prints of photographs come back to you.
CB radios.
Getting lost. With GPS coming to more and more phones, your location is only a click away.
Rotary-dial telephones.
Answering machines.
Using a stick to point at information on a wallchart
Pay phones.
Phones with actual bells in them.
Fax machines.
Vacuum cleaners with bags in them.
FAX MACHINES?! When, exactly will they go extinct? In the course of my job, I'm faxing at least once a day.

Taking turns picking a radio station, or selecting a tape, for everyone to listen to during a long drive.
Remembering someone’s phone number.
Not knowing who was calling you on the phone.
Actually going down to a Blockbuster store to rent a movie.
Toys actually being suitable for the under-3s.
LEGO just being square blocks of various sizes, with the odd wheel, window or door.
Waiting for the television-network premiere to watch a movie after its run at the theater.
Relying on the 5-minute sport segment on the nightly news for baseball highlights.
Neat handwriting.
The days before the nanny state.
Starbuck being a man.
Han shoots first.
“Obi-Wan never told you what happened to your father.” But they’ve already seen episode III, so it’s no big surprise.
Kentucky Fried Chicken, as opposed to KFC.
Trig tables and log tables.
“Don’t know what a slide rule is for …”
Finding books in a card catalog at the library.
Swimming pools with diving boards.
Hershey bars in silver wrappers.
Sliding the paper outer wrapper off a Kit-Kat, placing it on the palm of your hand and clapping to make it bang loudly. Then sliding your finger down the silver foil of break off the first finger
A Marathon bar (what a Snickers used to be called in Britain).
Having to manually unlock a car door.
Writing a check.
Looking out the window during a long drive.
Roller skates, as opposed to blades.
Cash.
Libraries as a place to get books rather than a place to use the internet.
Spending your entire allowance at the arcade in the mall.
Omni Magazine
A physical dictionary — either for spelling or definitions.
When a ‘geek’ and a ‘nerd’ were one and the same.
You mean...a geek is something different from a nerd? The two terms were interchangeable into my teens. I didn't know they aren't anymore.
Libraries as a place to get books...we get a bunch every month. I can maybe imagine an entire library migrating online, but I don't see that happening any time soon. Yes, there's Google Books...but what about newer releases?
How many phone numbers do you know? I started to protest at this and Eva asked me what my parents' cell phone number was. I drew a blank. The only cell number I've got memorized is my wife's--on the grounds I occasionally need to use that one. Guess I should bone up on some others. But I know more than thirty different phone numbers just from work, as well as several other numbers I frequently call. All of the personal numbers are stored in our cordless phone's memory...but paging through the "phonebook" takes so long it's quicker just to dial the number!
Oh, and when did diving boards go bye-bye? Shows you how long it's been since I dog-paddled anywhere.
Anything else you can think of that's on its way out? And how many of these things will you miss?
on July 22, 2009

I'd have to think about that. Life is definitely accelerating.

The diving board... when our society became so litigous.

How about kids sports keeping score (don't want anyone to feel like life's a competition or anything, that's insane).

I had a modem where you actually had to place the phone into a coupling device. Blazing 120bps.

Where did that time go? LOL

Ha. I remember reading about "modems" in COMPUTE! magazine and thinking "but what's the point, really? Everything I could ever want for my computer's on my computer already."