The quality of mercy is much strained

...it droppeth, as a bombed plane from heaven
upon the place beneath.
(with apologies to Wm. Shakespeare)
I'm afraid my first reaction upon hearing that al-Megrahi was freed "on compassionate grounds" says more about me than it does about him. I was angry. Where was the compassion when 270 people lost their lives in a horrific terrorist attack? What's so awful about dying in prison?
Well, dying in prison is pretty awful, actually. Especially if you're innocent of the crime that put you there.
That's "if"...I'm not stupid enough to state unequivocally that al-Megrahi was framed...I merely note there's compelling evidence to suggest his conviction was politically motivated. He was not tried by a jury. He's always maintained his innocence. I'm no psychologist, but I find that telling. Most terrorists gloat over their crimes...because in their value system, they aren't "crimes" at all, but acts of heroism and valour.
Moving beyond such vague generalities and delving deeper, we learn that vital documents were withheld; that there are allegations the chief witness was paid off to the tune of $2 million; that at least two other witnesses were offered huge sums of money (and two forensic "experts invited to be prosecution witnesses were deemed totally unreliable); and that a key piece of evidence was faked.
Guilty beyond a reasonable doubt? Not only does the above cast doubts on his guilt, I think it makes a strong case for his innocence. Oh, yes, and he's writing a book to prove it.
So there's a chance--a good one, I believe--that the actual Lockerbie bombers are Iranian--or at least were hired by Iran--and out there walking free. Disgusting, isn't it? Premeditated mass murder on such a grand scale, committed for no good reason whatsoever? We'll ignore the matter of Iran Air Flight 655, shot down in Iranian territorial waters by an American battle cruiser after being "mistakenly" identified as an attacking F-14 Tomcat. For the record... 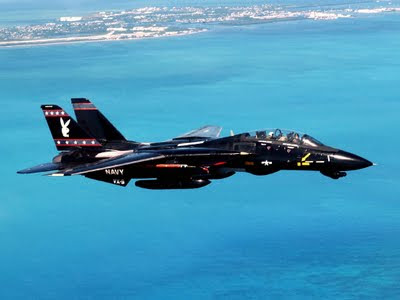 This...isn't.
But hey, mistakes get made, right? And when somebody in your military makes a little oopsie and kills 288 civilians (66 of whom were children), you immediately discipline the man by giving him the Legion of Merit. And then you profusely apologize to the aggrieved nation of Iran by saying, as George H.W. Bush did on more than one occasion (showing true contrition!)...
"I'll never apologize for the United States of America. Ever. I don't care what the facts are."
After having done all that, you'll naturally assume the case is closed, right? And that no reasonable country would feel the need to exact revenge? Nah. Never happen.
al-Megrahi, of course, was welcomed as a hero when he arrived back in Libya. That stuck in the craws of observers around the world, who simply can't accept that there are people out there who hate the United States with the sort of raw passion with which only Americans are allowed to hate other countries. Now there are new allegations that al-Megrahi was released as part of a prisoners-for-oil swap (which is undoubtedly crass as all hell, and would be especially damning if it actually took some kind of economic impetus to release an innocent man). There are reports that al-Megrahi may not be quite as ill as previously thought: that he might have as much as eight months left to live as opposed to three.
Well, then.
You really have to question where all the outrage in the United States is coming from. It's especially palpable in reaction to Kenny Macaskill's "Christian compassion". I hate to drag this back to the subject of my previous post, but there really do seem to be an awful lot of Christians in the U.S. who have forgotten whatever they ever learned about the teachings of their Lord Jesus Christ on the matter of forgiveness. Christ supposedly forgave his torturers as they were murdering Him, after all. Yet so many seem unwilling even to let their God forgive this man, let alone forgive him themselves. And that's even assuming he's guilty--which is, as I hope I've shown, a very shaky assumption indeed.
on August 30, 2009