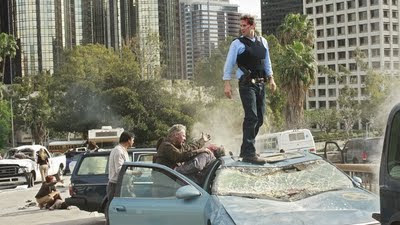 FlashForward is extremely loosely based on the novel of the same name by Canadian author Robert J. Sawyer. The book itself is probably the least compelling of the many he's written, but its premise (and that of the TV series) is fascinating.
For reasons unknown, the entire human race loses consciousness at precisely the same time and is out cold for exactly two minutes and seventeen seconds. Madness ensues, of course: worldwide, millions of people die in plane crashes, car crashes, and a myriad of other all-too-imaginable ways. But what's really intriguing is the aftermath. It turns out nearly everyone has had a vision of the future. In the novel, it's about twenty years hence; in the TV series, it's April 29, 2010--which is of course the first day of the May sweeps.
These visions are quickly corroborated as people who have seen each other in them make contact in real life and confirm that. Then the search for meaning begins. What caused this? Will it happen again? Will the future as seen in the visions happen, is it just one of many possible futures, or is the whole thing an inexplicably elaborate hoax? What of the people who saw nothing while they were blacked out...does that mean they're dead by that date? And how do people act in the here and now if their future is supposedly known?
It's this last question that really interests me. Because it strikes me that most of us, while claiming the future is unknowable, act very much as if it's cast in stone. We are all creatures of routine and habit, and anything that upsets that is--for most people--well, upsetting. When we imagine possible futures, they usually look a lot like our present...or at least there are discernible stepping stones between here and there.
For dramatic purposes, the show doesn't work like that, of course. A happily married major character sees herself intimately involved with a man in her "flashforward"--a man who is not her husband, a man who in fact she has never met. Another woman sees herself pregnant six months from now--and right now she has neither a boyfriend nor any desire to have kids. Yet another man envisions his daughter, supposedly killed in Afghanistan, alive. It's bizarre in the extreme.
But when you stop to think about it, life's like that. If you'd told me all about my wife six months before I met her, I probably would have laughed at the very notion of a wife in my life...and in hindsight, every action I undertook in those six months--while completely subconscious--brought me closer and closer to the instant where I would (a) meet my future wife and (b) recognize my future wife when I met her.
Likewise, professionally: I've known many people who suddenly switched careers, only belatedly recognizing they'd been preparing to do so for weeks or months.
Life is an ongoing process of continuous choice. While it often seems as if things just "happen" to us, it is our perception of those things that determines our experience of them. Some people see stagnation where I see stability; I may see a crisis where others perceive an opportunity. Viewed this way, the future shouldn't frighten you, no matter what it may contain. If you view yourself as the cause of events in your own life--and if you're not causing them, what, exactly, is?--then whatever happens is indeed happening for a reason. What reason? That's up to you.
I look forward, pun definitely intended, to future episodes of this show. The novel, like most of Sawyer's work, is rooted in hard science, whereas the show seems to be taking a more philosophical/artistic bent. But it wouldn't surprise me overmuch if both studies of human consciousness end up in the same place.
on October 04, 2009

Thanks for the heads up, I usually don't watch scripted TV but this sounds like it may be worth it, I'll check it out. Have I missed too much already or will i get up to speed on plot, characters etc...?

I'm just glad God has a plan for me so I am taken care of.

Rocketstar: the first two episodes are viewable online at the ABC website (and Hulu knows where else by now). It's on Thursdays at 8, and has earned pride of place on my PVR list. There's been a lot that's happened, but even an episode summary should get you up somewhat to speed.
As for God's plan for you...you mean you're just glad YOU have a plan for you...right?

exactly, forgot to add the wink.