Every time you turn on a television in a Walt Disney World Resort, no matter what channel or volume you last had it at, what you'll get is channel 18 at TOP VOLUME. Channel 18 is all-Stacey, all the time, and what Stacey does is Disney Must-Do's. I wanted to get tired of this. I really did. But somehow her enthusiasm overcame my cynicism every single time. You can laugh all you want. But if you want an overview of all seven Disney parks and their premier attractions, you could do a lot worse than listen to Stacey.

Stacey's "Happiest Place On Earth" lives up to its billing, for the most part. Amid the stresses that come with being away from home for an extended period of time, it must be said that we had a wonderful experience. I mean that quite literally: an experience full of wonder.
Not every park, ride or meal lived up to the expectations I had (perhaps unreasonably) placed on it. Some overly hyped rides and meals were, quite frankly, mediocre. But that was offset by a great many things we hadn't thought would be half as good as they ended up being. 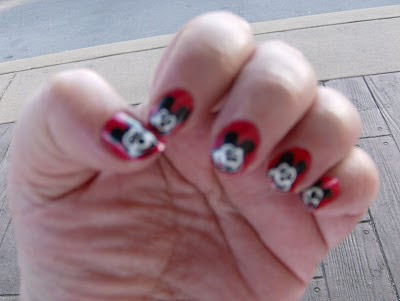 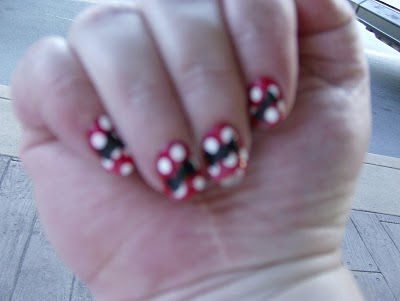 Yet another of Eva's talents discovered
Our first day was spent in the Magic Kingdom. Let me get this right out front: it's aptly named if you're a child or even a cynical pre-teen. For adults, a great deal of the magic lies in observing children, dozens, scores, hundreds of children, nearly every single one of them acting like that ideal vision you have of children, the vision that real, actual children rarely seem to live up to. The very few cranky kids were obviously overheated or exhausted. The vast majority gazed around in either Goofy wonder or with great big rapturous grins on their faces. 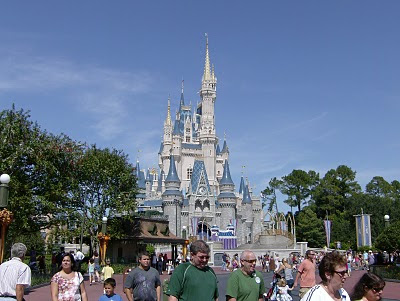 Cinderella's Castle, of course...except didn't Cinderella marry a Prince? Don't the castles belong to the King or Queen?
Adult thought, adult thought, banish the adult thought. There's no place for adult thoughts in the Magic Kingdom...just as there is no place for magic in (most) adult thoughts. Pity, that. Because there is magic here. You can call it illusion or Imagineering or whatever you want, but it really is a species of magic, and a pretty potent one at that. I was here in 1984, when I was the strangest mixture of hopelessly innocent and insufferably jaded, and a few short hours turned me into a child. This time, at 38, I could feel the same force at work in me. That's powerful mojo...trust me.
Whether you ride The Haunted Mansion, the special effects in which are all the more astounding when you realize how old they are, or Space Mountain, which moves at all of 28 mph but somehow feels at least twice that--magic just pervades the place. My most magical experience was undoubtedly Mickey's PhilharMagic, which will enchant anybody with the slightest trace of childhood left in them.
Our meal that first day was at Trail's End (Fort Wilderness), A boat takes you over there from the Magic Kingdom, and the love of my life will miss no opportunity to ride a boat. Disney did a wonderful job--a magical job, you might say--of making Fort Wilderness appear as if it was truly in the wilderness. Almost felt like my dad's place. And the meal was shockingly good: some of the best fried chicken I've ever had resides on that buffet.
Second day: EPCOT. 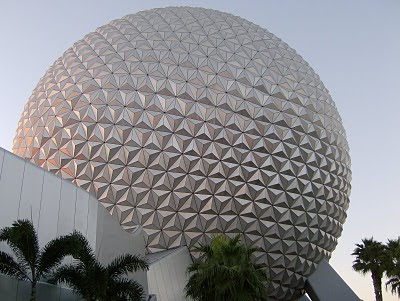 This is "It's a Small World" writ large; it's also Disney all grown up. We spent most of our time in this park, coming back to eat here every evening. The variety of restaurants is nearly endless.
As I mentioned, you will walk your socks off here. The front of the park is Future World: it's here you'll find the most popular ride in all of Disney World, one that I was told I "must do" long before I made Stacey's acquaintance: Soarin'.
This was (sorry to say it, Andy) my biggest disappointment. Don't get me wrong, it's a fun ride, but I've done something very similar at Science North in Sudbury, Ontario. For some reason I expected to be flying Superman-style through this: we were sitting. I thought it would be considerably more thrilling: it was a gentle, almost sleep-inducing flight. And there was absolutely no narrative to it. One second you're flying over a mountain in winter, then BOOM it's summer and you're somewhere else; JUMP CUT you're in L.A....it really brought me out of the magic.
TEST TRACK wasn't even on my list of Must Do's until I found out it was the fastest ride in Disney. (My car hit exactly the same speed as the one in this video: 64.8 mph). You want magic? This was the first of several occasions where I wish the line had been longer. You queue up for this in what looks for all the world like an auto factory. My stepdad would be much better able to ascertain the authenticity, but it looked real. And you exit into an actual GM showroom, where hot muscle cars and cool concepts vie for space with production models, including one my stepdad helps to build. A great ride.
Today was our anniversary. We had tried to book the most popular restaurant in Disney World with no luck, and so we ended up in Coral Reef. Again, sadly, a disappointment. We were nowhere near the fish tank window-wall, the food (other than dessert) was fair at best and hideously overpriced. We were grateful to be on the DDP.
The Disney Dining Plan is another of those things that must be debated pro and con beforehand. There are various levels. The one we chose gave us one 'quick service' (fast food-ish, consisting of a combo, a drink and a desert) and one 'table service' (sit-down or buffet, entree, drink and dessert covered, but not an appetizer) per day, also one 'snack', which could be a scoop of popcorn or a bottled water or any number of other things. That plan cost $42 per person per day. That sounds steep--it is steep--but paying out of pocket can be outrageous.
Eating out in America is considerably cheaper, as a rule, than eating out in Canada. Eating out at Disney presents prices a Canadian is apt to balk at. Most of our dinners were $70 or more, and a couple were over $100. With those prices, the DDP was a no-brainer for us, but you might find differently. If you have small appetites, never eat desserts, or if you prefer burgers over steaks, the DDP is not for you. We appreciated that we were able to order such things as filet mignon and New York Strip without worrying about the $35 price.
(And we ended up using all our snack credits to buy little edible gifts for friends.)
Tomorrow: EPCOT World Showcase, Animal Kingdom, and Disney's Hollywood Studios
on October 22, 2010

It appears that whatever you do, you will be exhausted.

One day in the park is...a walk in the park. Fitness buffs such as yourself should have little trouble, Rocket...at least over the first few days. I believe a solid week of park-trekking would tax anyone who isn't an Olympian, certainly during the summer months. And realistically, you need about a week to see everything.