Apparently I Can't Buy Me Love

...because, quite simply, I can't afford it.

Good thing I'm not shopping for love, eh? Almost forty four grand just to get to the honeymoon? Thank you, Eva, from the bottom of my bank account heart, for not being the sort of woman who believes that the depth of my love is best measured in dollars and cents.

What exactly is the point of articles like this? I gotta say, this one made me feel like a cheap prick. Was that the intention?

For the record, and I've detailed some of this before, our wedding cost something like six grand. That included the honeymoon. Now, that was thirteen years ago; the handy-dandy Bank of Canada inflation calculator informs me we're looking at about $7520 in today's dollars.

Apparently we were supposed to spend almost four times that. None of our guests mentioned this to us; either they were too tactful or that figure's full of shit.

There's a huge difference. What I'd really like to see is a long-term study attempting to correlate the amount spent on a wedding with the likelihood of future divorce. I suspect--can't prove, obviously, but suspect--there's a strong correlation. Because people willing to blow huge sums of money on a single day...well, forgive me, but have they really thought about what comes after?

I know people who spent substantially less than we did on their weddings. One couple's wedding predates ours and they're still going strong; the other wedding was relatively recent, but I believe they've got what it takes to last as well. Of course, the plural of anecdote is not data. But I can't help wondering. Each time I hear about a marriage on the rocks, I want to blurt out "and how much did you waste on pay for the wedding?"

Heaven forbid I insist to the world that my way is The One Right Way To Be. If you have the money for an extravagant wedding, by all means spend it. But please bear in mind a truth, or at least the truth as I see it: just because you may be financially rich now doesn't mean you will be in the future. And love can't be all about money. It just can't be. When your parents told you the best things in life are free, they may not have mentioned love. But it is the best thing...really the only thing in life.

I said all that to say this.

Budget the luxuries first. And do spoil your love. It needn't cost much, amortized over the years of your life together. 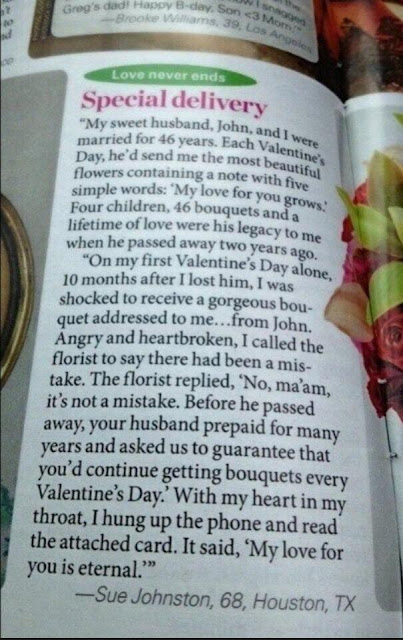 Happy Valentine's Day, Eva. All the money in the world wouldn't change my love for you; nether would losing every dime I have. With you, I'm rich beyond anything I'd have dared to dream before I met you.
on February 13, 2013