Boston, Toronto, and What We're Up Against

Boston is not an easy thing to write about. First, there was for quite some time a serious lack of credible information. Conspiracies breed like rabbits in an environment like this, especially since there are many people with political agendas perfectly willing to twist what facts there are to fit their narrative. I like to think I'm not ready for a tin hat, but I am willing to entertain the notion that things aren't always as they appear. Entertaining that notion has led me into some pretty dark places over the past few days, let me tell you. I won't link--these people don't need the attention--but there are more than a few people convinced the Tsarnaev brothers were framed, that this was actually an inside job perpetrated or at least aided and abetted by the U.S. government.

There's a kind of logic in the insanity of that assertion, the same kind that sustains the 9/11 "truthers". (Indeed, many of the same elements are present, including a mysterious Saudi allegedly wined and dined by the government in the immediate aftermath and then discretely flown out of the country.) Certainly the people who believe things like this take it as read that their government hates them. At the very least, they believe that the U.S. government secretly likes acts of terror being perpetrated on its own soil, the better to keep the citizens in line. Whip a little Patriot Act on 'em. Reintroduce
...and keep reintroducing it until it passes. Eventually the government will have the police state it yearns for.
It's seductive, this state of mind. Knowing The Truth (tm) gives you a real sense of power, especially when you're surrounded by ignorant sheeple who won't wake up. It also makes it easy to fit future atrocities, whatever they may be, into your head: no need to flail around for answers, The Government Did It.

(Of course, it follows that you can substitute "The Government" for your bugaboo of choice. I'd be more inclined to believe the conspiracists, whatever their truth, if I didn't invariably detect pre-existing antipathy towards whoever their idea of the guilty party is.)

The ever-changing reports out of Boston pose their own problems for somebody who prides himself on getting it right. Just today we learn from the surviving Tsarnaev brother that further attacks were planned in New York City. This is interesting for two reasons. It renders conspiracy theories null and void, of course. But it's also interesting because four days prior we were told Dzhokhar Tsarnaev might never speak again. That's quite the misdiagnosis. .Almost enough to turn me back down the conspiracy trail...never mind.

The third factor that makes Boston difficult to write about: once again, people have died in the name of jihad.

We're not supposed to acknowledge this, even though the people who are planning and carrying out these attacks have no trouble whatsoever citing jihad as their motivation. To be honest, I'm not sure why this is. Certainly it can't be out of a fear of giving offense...do we really care so much for the feelings of those who wish us dead? If so, maybe we deserve everything being done to us.

A chilling glimpse into the mind of a jihadist came this week here in Canada. Working off a tip from the FBI, Canadian authorities foiled a plot to blow up a Via Rail train en route from Toronto to New York. One of the accused questioned the authority of the court, saying that the Criminal Code of Canada is not a holy book.

This is what we're up against, folks: people who not only are out to kill us, but who believe it's their holy duty to do it and that any laws standing in their way are irreverent and thus irrelevant. We're up against a faith that does precious little to root out its extremists. To be fair, it's hard to blame them: moderate Muslims, those who view the call to jihad as a metaphor and nothing more, are at least as hated by the fundamentalists as us infidels.

Spare me, please, the protestations that Islam means 'peace' and that it is a religion of peace. Islam means 'submission', and the radical Islamists believe they are called by Allah to fight the dar al-Harb (the 'house of war', i.e. the world not under Islamic rule) into that submission. This website shows their efforts towards world "peace", which are ongoing.

All that said, the threat of Islamic terrorism, or indeed any kind of terrorism, should not be enough to keep you housebound. I almost never agree with Ezra Levant on anything at all, but he couldn't be more right here. Why was Boston shut down? Was it really necessary to paralyze a great American city just to find two whacko brothers? I think not. What kind of message does this response send to aspiring terrorists? As Levant notes, the marathon bombings, while tragic, were extremely modest on the terrorism scale--the kind of thing Israel deals with on a daily basis. But America--America, the big, the bold, the brash, the beautiful!...wigged out. C'mon, America. You're better than that and you know it.

Back here in Canada: Justin Trudeau, newly minted Liberal leader, has earned predictable scorn for musing about the 'root causes' of terrorism. Our Prime Minister scolded him, saying "now is not the time to commit sociology". (Aside: very telling choice of verb from a man who has given us every reason to believe he hates and fears science. To me it sounds as if "sociology" is an atrocity like murder, which is something you also "commit".)
Needless to say, I disagree with the idea that we should not examine the root causes of any problem in order to solve the problem. But it is fair to note that poverty, an oft-cited 'root cause', isn't one. The Tsarnaev brothers were nowhere close to poor. Osama bin Laden was obscenely wealthy and many of his most devout Saudi followers are, too. You want root causes? I wrote about them seven years ago:

Here's Hussein Massawi, a former leader of the terrorist group Hezbollah--a group which shares ideals with al-Qaeda--on the reason for terrorist attack: "We are not fighting so that you will offer us something. We are fighting to eliminate you."

There are those who earnestly believe 9/11 was the opening salvo in a war of civilizational dominance. I don't believe that. Even with religion as a motivator--and it's a hell of a motivator--any cause that insist you kill yourself in order for it to be fulfilled is doomed. Given the choice of life versus seventy two virgins, even most Muslims will pick life.
(Another aside--Such a weird, weird belief that is. I mean, I could dive right into those 'appetizing vaginas', but 'eternal erection'? No, thank you. And who's going to be better in bed, a virgin or a woman who knows what she's doing? Even if you pick the virgin...there's only 72 of them. Of course, being as they're all ninety feet tall, it'll take you a while to climb each one. And you're probably going to get repeatedly grossed out on the way up because they're all "transparent to the marrow of their bones." Yeesh. If you're sexually aroused by any of the foregoing, could you please do me a favour and step away from me? Thanks.) In summary then: these terrorist attacks are likely to continue for some time. The attackers are highly motivated, and they believe they are doing God's work. However, the overblown response to each attack plays right into the terrorists' hands, and the media frenzy doesn't help either. It would probably be a good idea to adopt the British maxim... 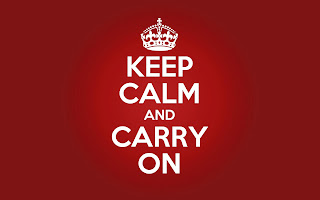 Turning against each other by blaming our government, or liberals, or conservatives, or anyone other than the terrorists, is likewise counterproductive. Yes, as distasteful as the Left may believe this to be, we are in fact at war with a perverted ideology that wishes us dead. But no, contrary to what many on the right will tell you, a Muslim is not a suspect by virtue of his faith.
on April 26, 2013