The Week That Was

Six months ago I wrote off Rob Ford's career in the wake of a conflict of interest scandal I was sure would take his career down. It didn't. Now there's a video that purports to show the man Cory Doctorow calls "Toronto's laughable bumblefuck of a Mayor" smoking crack cocaine in the company of known criminals. Whether said video is authentic or not, there is no redeeming quality to this story whatsoever. If it is Rob Ford and if he is indeed smoking crack, I can't see how his mayoralty will survive. Those many of you in Toronto who view the ouster of Rob Ford as redeeming need to consider the age-old question of the means and the ends. You see, you too can help to raise the two hundred large the drug dealers have set as the price to release the video. (As of this writing, we're more than halfway to the goal: please give generously, because drug dealers are people too, and these particular drug dealers are afraid for their livelihood in Toronto and quite possibly their lives.)

Is this what crowdsourcing has come to?

Nearly a year ago I bitterly lamented our federal government, which tends to tout its scandalous behaviour as a sign of strength. Harper has weathered every storm by gleefully scaping any goat he can find and either refusing  independent investigations outright or (more likely) eagerly embracing them as a stalling tactic. (Investigations take time, and political memories are short.)

Now the long-simmering Senate expense scandal has come to a furious boil, so far costing two senators their place in caucus and the PMO's chief of staff his job. (Nigel Wright had given generously, cutting a  personal check for ninety large, insisting it was a "gift"; Harper in turn insisted he knew nothing about this, which Thomas Walkom argues is flatly impossible. Harper, meanwhile, is in South America on a trade mission. The stench of corruption is in the air over Ottawa. Justin Trudeau must be salivating.

The weather turned lethal over Moore, OK. Again. The EF4 twister followed an eerily similar path as an F5  in 1999 and an F4 in 2003; five tornadoes have struck this city since 2003. I don't know about you, but I'd be thinking relocation.
As with any natural disaster, tales of miniature tragedies play out alongside  heartwarming tear-jerkers galore.
I was very happy for this woman and her beloved dog, but all the same, I found myself more than a little irked watching the video. NOBODY HELPS HER. She's an elderly lady and her dog is trapped under rubble and NONE of the journalists there lifts a finger until she begs for it.

And then there's the little matter of prayers.

Almost without exception, survivors of this tornado thanked God, said they were blessed, told us they had guardian angels watching over them, told us their prayers were answered. The cognitive dissonance is simply staggering, but it's very common in the wake of disasters natural and man-made. Are you glad to be alive? Undoubtedly. But in your morning prayers, were you *really* beseeching the Almighty for this? 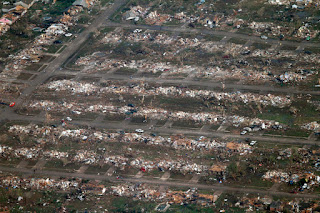 And I can't help but wonder, did this "act of God" -- don't look at me, that's what these things are called -- kill your neighbours and friends because they didn't pray hard enough? My apologies to religious folk offended by the question, but it has bothered me for years. It's a much more graphic example of the competing football teams, each praying for victory. Only one team can win: does God disfavour the other?

******
As you can perhaps tell from the tone of the foregoing, I'm back from vacation and nobody needs a vacation as much as the person who just had one. Yesterday was a lovely twelve hour shift and I'm stiffer than a board this morning, with a mind to match. This is my only day off for a week, and I'm off to try and improve my mood a little...
on May 22, 2013