I never went through the 'girls are icky' stage that all little boys are supposed to experience. I found girls entrancing from my first exposure to them, away back in kindergarten. By grade one I had a girlfriend named Allison...the first girl I ever kissed. To this day I can tell you her address, which kind of frightens me being as I can't remember any number of important things in my current life.

Allison was the first girl to see me naked, and thereby hangs a tale. She came over to my house one day while I was having a bath, and when my mom came up to get me out of the bath, Allison followed her and barged into the bathroom. Like most kids that age, I'd imagine, I had no idea what she'd done wrong, only that it was definitely something, and looking back I'm kind of amazed at how cool my mother kept herself in the face of a seriously awkward situation. Then again, I don't recall seeing much of Allison after that, so perhaps some pressure was applied; in any event, she moved that summer and I never saw her again.

By grade three...well, I've written about what happened in grade three. Twice. After that, Her Name was Legion. I moved a lot starting the summer between third and fourth grade, attending three more elementary schools (one of them twice) and three different high schools. Each new school and each new year brought new girls to fixate on and new boys to beat me up. Very few of the girls over that time period paid me the slightest mind, and entirely too many of the boys paid me entirely too much mind. It's really some kind of blue-sky miracle that I eventually found equilibrium. I never was able to shut off the girl-valve entirely...even now I get crushes that are irrationally strong. But I've learned several coping strategies for them. The first and by far foremost, of course, is the happy marriage I have, the life I've built with Eva that I wouldn't exchange for all the crushes I've ever felt, even if they were all reciprocated. Marriage has a way of putting single life in perspective.

I've also learned to shut the hell up about the them. It's a good thing that piece of knowledge came to me well before I met my wife, eh? Before Eva came along, I was a perpetual maelstrom of raging hormones and inappropriate thoughts. That sort of thing forms a feedback loop if you let it, so I don't let it.

Perhaps oddly, the fact that there's never just one of these crushes at any given time mitigates them a great deal. People look at me oddly because I care so strongly about so many people, but what can I say? While Eva will always and forever be top of mind for me, there are many loveable people in the world. Pretty much everyone is, in fact.

I'd like to expand on that a minute, because I think it's a Great Truth that is too often overlooked in this world where people are looking for others to 'complete' them.

The word "enjoyable" is usually thought to mean that something or someone is a source of joy. That's not necessarily true, To "enjoy" is a verb, and perhaps it should be hyphenated en-joy...to inject joy into something. If you say something is 'en-joy-able', it means you're able to find the joy in it. Joy can be found almost anywhere, if you know how to look for it. Not everyone knows this secret. Precious few do, in fact.

Likewise, to love is of course a verb. It takes effort to love, sometimes concerted effort if the person you're loving has forgotten he or she is loveable. The Bible says to love your enemy, and that's easier said then done sometimes. The trick is to remember "your enemy" and you are intimately connected, that you are part of your enemy and he or she is part of you. Therefore, to the extent you hate anyone, you're hating yourself. Which is never productive.
Do I live up to this teaching? I do not. I try, and fail, and try again. But I think of love as a muscle: the more you work it, the stronger it gets and the easier it is to use.

My love muscle has grown appreciably over the past twenty years, and you can get your mind out of the gutter any time now because this 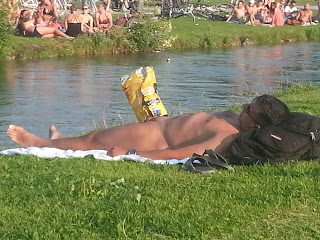 is NOT what I'm talking about.

(Can you imagine this happening in North America? A guy sleeping nude in a park in the middle of the day, and instead of being roused, he's left in his aroused state? Munich's quite the town.)

Not for the first tine nor the last, I will lament that English, the language of endless synonyms and nuances, employs the catch-all 'love' to describe so many shades of  emotion, especially since sex has crowded in on  love to the point where a "lover" doesn't mean what it logically should anymore.

The love muscle must be used judiciously, and not just for the obvious dirty reason you keep thinking of. I think some people may mistake my inclination to express my love, even though I'm not -- don't worry -- going to run up and give you a smooch. I also am positive the people I care about have no least idea how much I do care about them, on account of there's more than one of them, as I said. For some reason you're only allowed to care about one person, or rather, you're only supposed to say so, in this life and in this world. I get that you should only love one person "in that way"...but there are lots of other ways.

Too many people are uncomfortable with the notion I care about them, which would hurt me if I'd let it. I chalk it up to misunderstanding: just because I love you, just because I have a crush on you even, doesn't mean I'm thinking sexual thoughts about you every seven seconds. No, it's more like every half hour. Joking, joking. And I'm certainly not expecting you to think sexual--or indeed any--thoughts about me. I love unconditionally, or try to, at any rate. I have extensive experience with unrequited love...before I met the wife of my life it was pretty much the default setting. It used to bother me, so I turned it into a strength.

Shakespeare told us to "love all, trust a few, do harm to none". That's good advice. "Loving all" is a challenge, to be sure, but trust me if you will, it does get easier with practice.