Look at that, it's a B.B. cat!
--me on many, many occasions, stroking up the purrbox on our little tabby 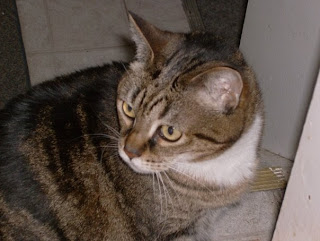 ----------------
The story of B.B begins in a Vancouver pet store. Actually, to call this place (long defunct, now) a pet store is to legitimize what might have been a criminal operation. Certainly the owner didn't care for the animals in his care he told Eva to get out and never come back because she had criticized the store's cleanliness. She observed him kicking at the cages and the cat she had originally tried to buy the day before was gone. Normally this wouldn't be worth mentioning--it's a pet store, somebody obviously bought the cat--but the atmosphere was such that it was at least as likely that cat was sick or dead.
Eva snuck back in the next day and bought B.B., a kitten so small she fit in Eva's pocket.

It would have been mighty interesting to have been a fly on the wall when B.B. met Eva's existing cat, Streak. Of course, our hypothetical fly would have to speak Feline. The first day, Streak hissed nonstop like a teakettle at the little interloper from across the room. The next morning they were right up in each others' faces, Streak still hissing and spitting. When Eva got home the next day, Streak was letting B.B. suckle. (Streak had been fixed for a number of years at this point.) They were inseparable from that point on. My memories of B.B. have Streak attached to them more often than not: they were always in a little kittypile, grooming each other.

I've written about the differences between our two furballs here. B.B-cat was your quintessential cuddle-slut, but she had an evil side as well, especially as a kitten. Eva vividly remembers her having caught a mouse and dragged it under the couch: by the time the couch was pulled out, there was nothing left of the mouse but a tail hanging out of B.B.'s mouth. Yurk.

And no tolerance was given when we tried to introduce a third cat into our happy home. Streak, who had initially so resented B.B., didn't give much of a shit either way, but B.B. wanted Dory dead. She stalked the new cat relentlessly, and when it didn't abate after a week we shipped Dory out to a quieter place where she could be the only cat.

B.B knew her name, and if you appended the word "scoop" to it, she'd come out and let herself be gathered up, purring fit to burst. To do B.B-scoop properly, you'd cradle the cat belly up and she'd stick one hind leg out and gaze up at you with pure adoration in her little kitty face.

B.B. lost her life's companion six years ago, almost to the day (wow) and we worried at the time that she would follow Streak off this mortal coil in short order. That didn't happen. Instead, she seemed to blossom, coming up out of her basement home and adopting the couch...the same couch that Tux and Georgia have colonized. Indeed, after a while, B.B. would accept sniffs from either puppy and occasionally even head-butt one of them (usually the Peach, who is marginally less rang-y.)  She'd even wander out on to the deck and sniff at the leaves until Tux would herd her back in the house.

She's always been a little cat. Over the past month or so, she's become skeletal, and for the past several days she hasn't eaten at all and has rarely drank. She set up home under the kitchen table (a place she'd never really bothered to even investigate before) and hasn't moved from that spot. She was also starting to suffer little micro-seizures. It was definitely time to see her off.

Our vet was, as always, fantastic. We even got a call the next day to see how we were doing. We miss B.B. (and Streak, who has really been on my mind as her 'sister' 's time drew near) but as always with these decisions, we know we did the right thing at the right time.

We'll be cat-less for a while now, but not for too long. A house isn't  a home without at least one cat in it. No doubt the next kittens who come along will be loved...but we'll never forget the B.B-cat. 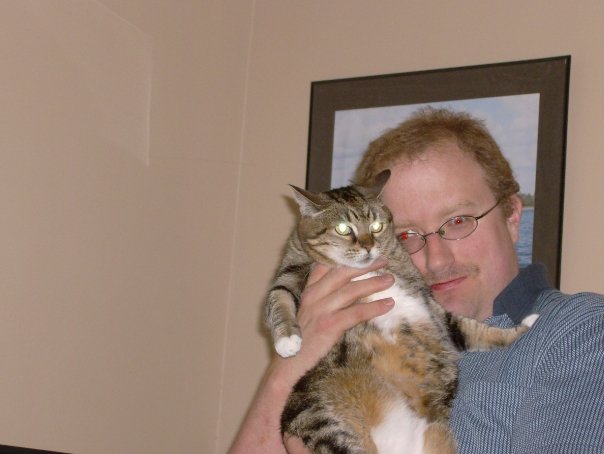