Fire in the Market

There is a farmers' market about a four minute drive from my front door.  The main building burned down a week ago; I was at Eva's mom's place at the tine, surfing Reddit, when the thread showed up in the Waterloo forum, with a picture. This was five hours before it showed up on the local news websites.
Let's get the most important thing out of the way: nobody was killed or hurt. The reaction, though, amazed me: it was as if dozens of people had been killed. Reddit had a five hour head start, but once the conventional media got hold of this story, it was front page news. NATIONAL news. And the outpouring of genuine grief on Facebook...again, it was as if several people had died.

Perhaps familiarity does breed contempt, even for me: I tend to forget that this market is actually a tourist destination. Seriously: there's a big hotel right next to it. I've never heard of a city that didn't have a farmer's market. Granted, this one is bigger than most. I can certainly understand the appeal of a farmer's market over a store: the food is infinitely better. But the appeal of that farmer's market as a Must-See tourist mecca is lost on me. Ir's like going to a city and demanding to check out an elementary school, or a gas station. It's like they say: you've seen one shopping centre, you've seen a mall.

This is, of course, not a popular opinion around here. And it got me thinking about something my father once told me, that left me slack-jawed.
My Dad lives in Canadian Shield country. Panoramas like this 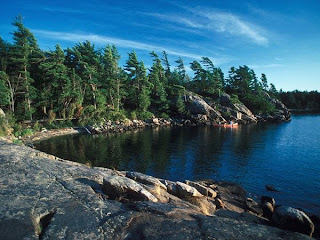 are a nickel a gross in his immediate surroundings. It's terrain that never fails to relax and energize me. He was talking to me about a drive he took along the 402, a highway not all that far from me that has got to be the most boring stretch of road in Ontario: ruler-straight, few exits, farmland and field on both sides with only the occasional windbreak of trees to liven up the monotony. I asked him if he was in danger of falling asleep on that highway, and he said no, he found the views very interesting. I told him he was nuts to think so, living where he did, and he said "why? All we have up here is rocks and trees and lakes."
"..." I said.
Then I tried again. "..."


As it turns out: he's not alone. Wendell Ferguson lets us know...'the whole North is just proliferous with metamorphic and coniferous rocks and trees...trees and rocks...'

It happened again on the ferry from Vancouver to Victoria, in 2003. I was glued to window as things like this 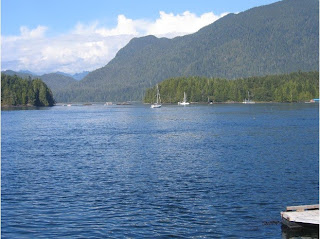 unspooled all around me. I heard the riffle of a newspaper page behind me and tore my gaze from the view to regard a businessman buried neck-deep in the stock reports, completely oblivious to the gorgeousness surrounding him. I remember thinking that even if this was unremarkable to him, the fare--it cost us seventy bucks for one way passage--should have prompted some measure of attention. Perhaps that was pocket change to him.

I guess somebody can get used to anything.

Don't get me wrong: I like going to the St. Jacob's farmers' market, so long as I get there and get gone early. Half an hour into its day and you have to suck your gut in to turn around. That's the problem with anything people flock to: people flock to it.

I'm told many of the vendors didn't have fire insurance, despite selling their produce in a building made entirely of timber. The mind reels and the sympathy abates just a titch (sorry). And then my wife, always the voice of reason around here, looks at me with exasperation and says "boy, sometimes when you decide to judge something, you're pretty damn harsh. What if I had a chocolate stall up there?"
"You wouldn't have been stupid enough to operate without insurance."
"Think again...I probably wouldn't bother. I bet the monthly premium would amount to more than I'd make."
"Well, who makes an entire building out of timber anyw..." and I shut up. At that point even I realized I was being an idiot.

I recognize the timing couldn't have been worse, the harvests are rolling in. But they will rebuild, and rebuild quickly. Many of the vendors are Amish and Mennonite...a more hardy and resilient group of people you'd be hard-pressed to find. And after this market is rebuilt, hopefully with slighter wider aisles, I promise to look at it with new eyes, and not take it for granted.