"You keep forgetting. But life is not for getting. Life is for giving."--Conversations with God, Neale Donald Walsch 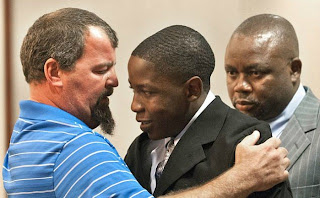 A father hugs the drunk-driving teenager who killed his son. Story here.

It's only difficult to imagine the strength and grace that comes from an act like the one pictured above if you're approaching it from a state of weakness.
If that sounds judgmental, it shouldn't. Imagine you're a gym rat, busily working the circuit. A little 98-pound nothing comes in and can barely lift the dumbbell an inch. Do you snigger at him and call him a weakling? Not if you're enlightened, you don't. Everybody has to start somewhere; from little acorns, mighty oaks arise. You don't criticize the acorn, do you?

Forgiveness, we are told, is difficult. The desire for revenge for wrongs real or imagined is very strong in many people. Unfortunately, that desire is endlessly corrosive. Left unchecked, it leads to blood feuds, the poisoning of hearts and the slaughter, real or metaphorical, of innocents down the ages.  After a time, hatred becomes the default and all is lost. It takes an act of supreme wilfulness and intent to arrest and reverse such a progression...and for many, such an act is beyond imagining.

"Forgiveness is the fragrance the violet sheds on the heel that crushed it."--Mark Twain

Better not to have to exert so much effort. Does the violet, in being crushed, have any choice but to release its fragrance? It does not. We humans, who do, can learn a lot from the violet. Because in the end -- and this is a radical teaching -- there is nothing to forgive.

Do you believe you can be hurt? Then you can be, and you will be...until you decide not to be. To be hurt is a decision you make yourself. Needless to say, it's a harmful decision, even if you don't subsequently decide to inflict your hurt on another.

I'll clarify a few things here for the people who probably think I'm crazy. Forgiveness does not mean absolving someone of responsibility for their own actions--

[F]orgiveness does not exonerate the perpetrator. Forgiveness liberates the victim. It's the gift you give yourself. T.D. Jakes

It does mean that our response to a wrong should be always to heal, not to punish. With a very few exceptions, people commit acts we deem "evil" out of an error in their own thinking, most often a shortsightedness and narrow perspective. The word "sin" is the translation most often given for the Greek ἁμαρτία -- which means "to miss the mark", "to be off-target". An error, in other words. What do we do with errors? Well, some correct themselves naturally. Others require a helping hand to correct.  We all make errors. It's speculated in linguistic circles that the very word "sin" ultimately derives from the proto-Indo-European verb "to be".

If you greet a sin against you with anger and resentfulness, you will only perpetuate the sin. This is why I am increasingly against prison as a solution for all but the most heinous of crimes. Prisons are little more than criminal factories; many, if not most, of the people who exit them come out "worse" than they were when they went in. Contrast this place. The prisoners in this Norway jail live in something more akin to a college dorm than a traditional prison, and the list of privileges they have would give many people pause. The people here -- even the rapists and murderers -- are treated, in short, like people.  Which may have something to do with the fact this prison boasts the lowest recidivism rate in Europe: just sixteen percent. These offenders serve their time, but always with the goal of ensuring they don't reoffend upon release. I think at this point I should bring up the word atonement, and ask my readers to insert a couple of hyphens whenever they see that word: at-one-ment. I believe atonement is required, because with atonement comes reconciliation, making us at one with each other again. In truth, I believe most "sin" arises out of the forgetting that we are all one.


The next thing I will clarify has to do with the choice of being hurt. It is, in fact, a choice to be hurt or not: any emotional state is. But if you choose not to be hurt, it does not make you some kind of emotionless robot. You can't tell me the father, above, doesn't grieve the loss of his son. Of course he does; on some level he always will. But he has chosen to turn his grief towards positive ends. Many people make the same choice; I believe it's the wellspring of much of the good in this world.

The third thing I'll clarify has to do with that statement, there is nothing to forgive.

That's what I'm aiming for, and that's what I fall short of. Forgiveness for me requires effort, still, sometimes an embarrassing amount of it. I hope to be able to get to the point of acceptance of whatever comes in my life. Not a stoic, uncaring acceptance; not even a "well, I guess I'll make the best of this" sort of acceptance. I mean an absolute understanding that whatever comes is for the best.
Such an emotional state requires me to always look beyond the appearances of things, to be supremely comfortable in my own skin wherever I move through the world. It also means I must strive to leave every person and circumstance better than I found it...until eventually I don't have to strive any more. I think that with enough practice, it becomes second nature to uncover one's first nature....