Thoughts on the resignation of Brendan Eich

Then the cheer faltered a little, stuttered, and died in my throat and I thought, did I just feel schadenfreude?

Mozilla CEO Brendan Eich has stepped down after his anti-gay stance was exposed and went viral..

The dating site OKCupid, upon determining you'd reached it using Firefox, helpfully put this up on your screen (click to embiggen:) 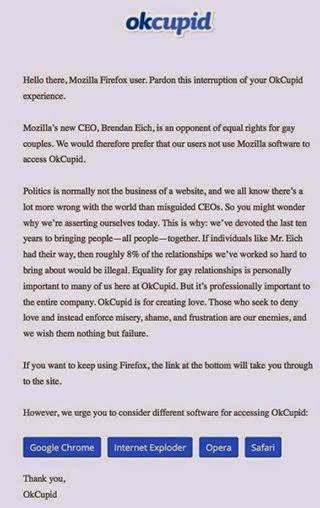 And I thought, this is great, but it's just one site. The entire Internet should do this, each and every page of it.

Not a day later, the CEO steps down. As George Takei noted, "Corporations: Sure, you're free to support bigotry. Just be prepared to face the music.

And the band played on...

I predict a shrill chorus of "help, I'm being oppressed!" from certain quarters as this news makes its way around. There will be columns penned about thoughtcrime and how there's no freedom of speech or religion any more. Some people will defiantly 'come out', so to speak, in favour of 'traditional values' and be declared heroes among their fellow bigots.

The thing that really irks me about this whole controversy is this: Not one person has ever been able to explain to me how extending marriage rights to homosexual persons harms (a) those persons or (b) any other persons. I've asked, and I'll ask again here, and believe me, I'm listening with open ears and a mind as open as I can make it. I want to know what's being taken from heterosexual couples so that gay couples can wed and be happy together. I want to know denial of human rights is so important to so many people who call themselves Christian. How are you affected if Jack and Gil down the road get married?

Mr. Eich is unrepentant about his beliefs, and he seems to think, even as he resigns, that they'd have had no bearing on his actions as CEO of a company that claims to be all about openness and inclusivity. This is clearly nonsense: people's religious beliefs, to the extent they hold them, inform every action they undertake. Indeed, Mr. Eich donated money in the past to a campaign to actively destroy the rights of gay people. In Christian parlance, "ye shall know them by their fruits. Do men gather grapes of thorns, or figs of thistles?" (Mt 7:16)
Eich claims his donation to Prop 8 is not "evidence of animosity" towards gay people. What, then, is it? This, too, reminds me uncomfortably of Christian tenets I've heard over and over: "love the sinner, hate the sin"--which is all well and good until the "sin" is something intrinsic to your very being!

Any time I ask what a CEO is actually for, one of the first things I'm told is that a CEO sets and embodies the values of his or her organization. By empowering Brendan Eich, Mozilla is empowering values that are inimical to its vision of equality for all. As the linked article above puts it,

By financially supporting a cause that said I do not view these people as deserving of all the same rights I have, and acting appalled when people were vocally upset about it, Mr. Eich was not taking responsibility for anything.

That shadenfreude I feel, the happiness at another's pain? I don't think it's shadenfreude when the pain is (a) deserved and (b) self-inflicted.
on April 03, 2014