WiFi in the Wild

I'm on vacation right now. And I've been glued to this computer even more than I usually am.

My French  IV class has been cancelled due to lack of interest--only four people enrolled, and I was one of 'em. I thought this might happen, as many of my French III classmates expressed serious misgivings about the intersession class, which was supposed to be a twice-a-week affair over eight weeks (as opposed to the three classes I've been through so far, which were Tuesday nights only).

Me, I'd go all day five days a week if it would get me fluent faster. As it is, by the time my fall course starts up, I'll probably have finished all the exercises in the textbook. I'll have to, just so I don't forget what I've learned already.

Your reaction to this probably depends on your age. I've written before about wifi at Disney World and the reaction to its coming, which boiled down to "it's about bloody time".  I was incredulous. I simply couldn't believe any sane, rational person would survey the so-called 'Happiest Place On Earth' (it is, trust me) and say to themselves, you know what's missing here? The Internet! "Flabbergasted" doesn't even begin to cover it.

Now they're putting wifi hotspots in our national parks. Because, you know, this 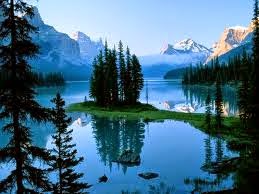 doesn't hold a candle to the latest Tweet. Because people would rather stare at their screens than at something like this... 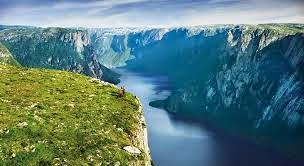 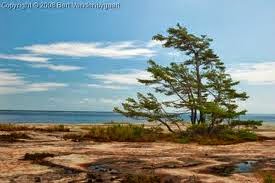 just can't be camping if your employer can't get a hold of you and make you work on your vacation.

I say I'd quit a job that pulled that stunt, except in all honesty I'd probably be fired. Because if my boss said something to me about  keeping in touch, I'd ask him if he had a family he cared about.

That people would willingly, even eagerly, tote their smartphones into the backcountry--while I wouldn't even put myself in a position where I could be forced to--just speaks to how alien I seem to be.

The only blog entry I've done about camping is also, oddly enough, about cell phones. But the cell phone part of the blog did not intrude on the camping part. To this day, nothing does intrude on my memories of camping: they're pure and pristine, like the lake, like the air, like the forest.

I love the online world mostly because of how it connects me to the offline world...my day isn't complete unless I check in with a couple of friends, and Facebook makes that so simple. Reddit is a source of endless blog and thoughtfodder and YouTube is, to me, nothing less than a miracle. But Ecclesiastes had it right, to everything there is a season, and as we approach camping season, it saddens me to think that someday soon, camping will be no different from sitting on your ass at home.
on May 05, 2014