I've been keeping a diary since I was 15. I wonder how many guys can say that.
Between '88 and '90 it was a daily diary. I think I only missed one day in that three year span, and I hope you'll pardon the nearly instant digression because it's time for y'all to laugh at me again.

I usually wrote up my day just before going to bed. One hot day in July--a Friday--my day went long. , I walked up  to McDonald's for a 4-8 shift. Sometime in the course of that shift I was asked if I could stay until midnight. I was already scheduled to bop--that's McD's slang for 'breakfast-open' the next morning at six. Ken at 42 would never even consider it: by the time I get home and get to sleep, given my wind-down period, it's gonna be 1:30 minimum and I'd have to be up by 5:15 to get to work for nope no way in hell.  Ken at 16 didn't bat an eye.
Ken at 16 was every bit as absentminded as the antique version is today. On this day he forgot his keys...and somehow didn't notice this until he was dropped off at about twenty after midnight.  (McDonald's policy back then was that anyone closing would get a ride home courtesy the manager on duty).
Anyway, so here I am bounding up my walk, reaching into my pocket for keys that don't exist.

Now here's the interesting part: my parents are home, asleep. Their bedroom looks out over our townhouse's little postage stamp of a back yard. It's July, and hotter than the hubs of hell: they've got an industrial-sized fan in their bedroom window, on full blast, and it effortlessly drowns out the door knocks, the doorbell, the catcalls from the yard, and the stones I throw at the window as a last resort. There's no point finding a phone to call them, either...chances are very good to excellent they wouldn't hear the phone. I try anyway, from a phone booth a block away. Nada.

What would you do? I'd spent probably 45 minutes trying to rouse them with no luck. Time to try the stick.

We had a mail slot in our front door. If I poked it open just so and peered at just the right angle I could see my keys, hanging on the wall straight ahead, maybe five feet away.

Find LONG, thin stick. Thread it through mail slot. Ever so carefully, inch it towards hook where keys are winking at me. Against all odds, actually manage to hook the keys on only the seventeenth try. Pull stick back, with keys on it--
--stick bends--
--and keys drop to the floor where I can't even see them any more.
A word I was not allowed to say at my age was said. Several times.

I have two choices now: go back to work and see if I can attract the attention of the close-open guy cleaning the pickles off the ceiling in the lobby (I'll be a close-open guy myself in a few years in a city an hour east of me and pickles on the ceiling will be commonplace...university students, the leaders of tomorrow)...or  I could try to sleep outside.

I was every bit the weather geek at 16 than I am today, and I knew the forecast was good for outdoor sleeping. Probably don't want to sleep on the ground, though, on account of the dew and the dirt and the fact that I'm going to have to bop my way through another shift in this uniform.

That left the picnic table.

Have you ever tried to sleep  on a picnic table?  Don't.

At dawn's first ominous crack I wriggled and writhed myself off the table and staggered to work. I actually got there about 45 minutes early and caught the close-open guy sweeping the lot. He let me in and I promptly fell asleep on a standard McD's bench seat in the crew room. After the agony I'd endured, that bench was like a feather bed.

So that's why I missed a day. Also why if I'm sufficiently awake I'm paranoid about my keys. But that adventure aside, I kept that diary every day for three years. In university, it became a sometimes thing, whenever I felt like writing, and whatever I felt like writing about....at first it was a giant WordPerfect document, then it went back to a couple of notebooks. I don't have the document and I've lost all but the last of the notebooks, which is a real shame because some of the best poetry I've ever written is gone forever. But eventually my diary migrated online into this very Breadbin.

Anybody can read this, anybody in the world, and there's not a great deal I've censored over the years. I've spent a lot of time looking at my numerous weaknesses and foibles and I've invited anyone who reads this to get in a good hearty guffaw at the ridiculous stuff that happens in my general vicinity on an almost daily basis.

This mindset towards my "private" scribblings is not new.

I let Eva read anything she wanted to read of my old diaries, before things got really serious between us. Without hesitation. The thought was, if she looked unflinchingly at what was (and is, let's face it) an unflattering portrait of the man she was proposing to marry...well, it's only fair to let someone know what they're in for, isn't it? She looked and still married me and here we are fifteen years later. happily insane. She gets editorial control over any Breadbin entry about her--again, only fair--but otherwise she lets me type to my heart's content. And for some reason I've never really understood, the most revealing posts about me, the ones that tend towards either embarrassment or bewilderment, are the posts she likes the most.

Back in the mists of time, when I was keeping that daily diary, it took the form of a faux-leather-fronted little book with a lock, and pages for each day of the year. The first thing I'd do on Christmas Day, when next year's incarnation of the diary arrived, was break that lock. The trifling (but again, revealing) reason was that I didn't want to have to fiddle-faddle with a lock just to write some stuff down: way too lazy for that.  The more pressing reason, though, was that if I could break that lock, anyone who really wanted to could certainly do it too, which made it pointless as far as I was concerned.

"Anyone who really wanted to", in those days, was limited to my mom and stepdad.I'm an only child, and while I did have friends by, well, shortly after I started that daily journal, well, males don't keep diaries, right? Nor are they interested in anyone else's. But my parents-- I'm not sure if they ever did read any of it. I suspected at one point, but couldn't be certain. In the end, though, I wouldn't have blamed them if they had taken a look every now and again. I was an odd kid and an odd teenager...not budding serial killer odd but a bit odd nonetheless. Also, by dint of living in my parents' house, I had absolutely no expectation of privacy.

Which is not to say there was no propriety in my house; indeed, if anything there was a surfeit. I'm sure this will come as a shock to anyone who hears my off-colour jokes today, but I was Mister Priss growing up My 'talk' came in this form: 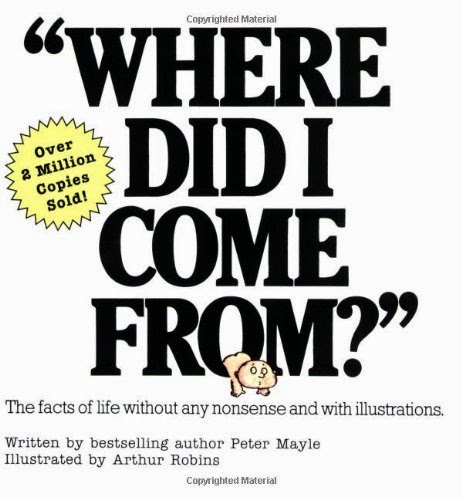 Helpful book--I've never forgotten that 'vagina' rhymes with 'North Carolina'--but it's almost frighteningly sanitary. It's also beyond sexist. People have sex, we're told, because "the man wants to get as close to the woman as he can." Interesting. Does the woman want this?  Doesn't say. The man obviously enjoys the act, but nothing is said about the woman enjoying it.  The person who wrote this book is named Peter Mayle. No kidding. Somebody really needs to update this book for this century.

Off pursuing the men on the beach again. Damn tan gents.

Anyway, as I think I was saying, I had propriety. I had privacy too, but I didn't expect it. It was made pretty clear to me that while my room was my room, it existed in my parents' house, which really made it their room. This is not a popular attitude nowadays, but I agree with it. If we'd had kids, they would have seen it in action. Here's a for instance: even with two kids, until high school at a minimum, the computer(s) would be right here in the living room where Eva and I could keep an eye on it or them. I wouldn't presume to censor where my kids went on the Net--no point, for one thing--but I'd be ready to talk to them about anything they might find lurking in its dark corners. Privacy? Not in my house you don't.
(And while I've come around reluctantly on cellphones, if only because without one my child would have no "social" life -- and you're damned right "social"'s in quotes--until my kid is paying for her own cellphone and all that goes with it,  I'd get free and unfettered access to anything on it...or she wouldn't. Simple like that.)

I had privacy...on my parents' terms. That seems odd to kids today, who insist on privacy even as they share every last bowel movement on whatever the latest app-du-jour is. What they mean by privacy, of course, is privacy from one's parental units...that's why kids are abandoning Facebook in hordes and droves, because Mom and Dad and even Grandma are all on there now. Well, you know what? Sooner or later the stuff you do in private is probably going to wind up public and you're going to have to explain it to dear old Mom and Dad and maybe even Grandma. This was so patently obvious to me growing up that I couldn't have even tried to dispute it. But nowadays it boggles my mind how, nearly every time we have a , the parents are oblivious. I mean, how does that happen? It wouldn't have happened in my family, let me tell you.

My cousin says there's no such thing as privacy any more. He's echoing the former chair of Sun Microsystems, Scot McNealy, who said "you have zero privacy. Get over it" back in 1991. This is the world we made, folks...a world I daresay I was well prepared for. For now, the only privacy we retain is in our heads. (Someday I'll explain to you why this is not necessarily a Good Thing.) For now, Dear Diary...and dear readers of this diary...I bid you adieu.
on June 03, 2014