Hobby Lobby, Corporate Personhood and Biting Off More Than I Can Chew

Whenever anything happens in the United States that gets Republicans apoplectic--with Obama in power, that's daily, if not hourly--my first impulse is to go sample the rage on author Dan Simmons' forum. I haven't been a member there for many years now (getting called a "liittle twerp" by the host himself for daring to express an opinion contrary to his was probably the last straw), but I like to check in. You know, just to make sure the lunatics are still in their cages.

And every once in a while, between suggesting Congress should be "nuked" over Obamacare and ferreting out the Muslims hiding behind every bush just waiting to sabotage the Great American Way Of Life...every once in a while they put something up that gives me pause, makes me re-evaluate my own thoughts.

The Hobby Lobby decision from the Supreme Court of the United States--essentially, that certain companies can be exempted from having to provide insurance coverage for items or services against their religious beliefs (in this case, abortifacients)...it reaped a whirlwind. I found this posted in the Hot Button Issues forum: 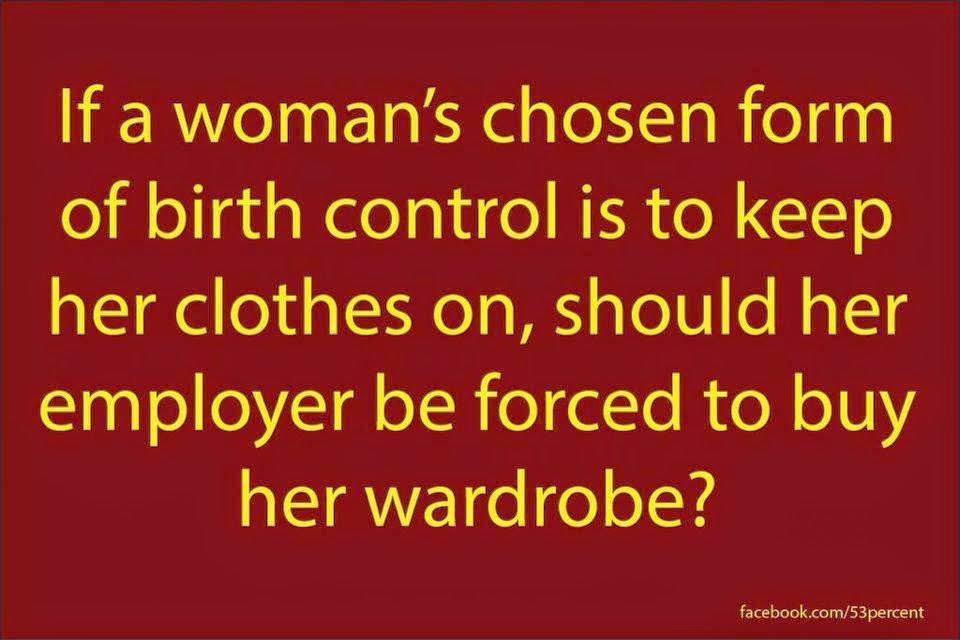 There are a few rather ugly subtexts to this question. One is that abortion is just another form of birth control, with the same moral weight as, say, unrolling and placing a condom. While I'm sure there are some women who are casual about aborting unwanted babies, I'm more sure they are a small minority.

Another undertone I'm detecting here is that only women can be responsible for birth control. That should offend men and women equally, I'm thinking. I feel so strongly that men should assume some responsibility for birth control that I had a vasectomy.

A third that really pisses me off is that a naked woman is fair game for me to impregnate. Suppose she removes 82% of her clothing, leaving something skimpy on. Does that method of "birth control" match the 82% effectiveness of condoms? At what point of coverage can a woman truly consider herself safe? Maybe a burqa would provide 100% reliable birth control?

I have a real issue when "corporate persons" are allowed to dictate to individual persons on "religious" grounds. (There's nothing in the Christian Bible about abortion. Nothing at all.) It's also very odd to me that only "closely held" companies have this right--essentially what this says to me is that if you choose to work for a family-owned corporation, you might want to consider adopting the family religion as well. And of course we're focussing on Christianity here...suppose a Muslim family starts and incorporates a company. Should that company operate under sharia law? If not, why not? What about a Mormon corporation? It occurs to me that polygamous marriages might be legal now. Just call it a corporation. "Joe Smith and Chattels, Inc." Group marriage is illegal, you say? What if it's my deeply held religious belief, and I run a little business?

Is it right that a business can dictate religion--any religion, including humanism or atheism--to its employees? (You can tell me atheism is not a religion, and I'd suggest to you that the militant variety has all the traits of one). I'd say no, it's not acceptable. It's not just abortion. Any number of other beliefs are now fair game to inflict on innocent employees. Is your husband the same gender as you are? That's legal in an ever-increasing number of states, but this opens up a rather large loophole, doesn't it?

People will say that you have a choice as to whether you want to work for such a company, or not. That's true, as far as it goes. It's telling that SCOTUS  restricted this decision to "closely held" corporations, by which it presumably meant family-owned businesses. You can always go work for some other corporation. If, of course, you can get them to offer you a job. Unless and until they do, they're irrelevant, however. Just as your personal life outside the job should be to any corporation.