A Day For The Aged

This one's going to ramble. I will not offer apologies: I'm in too good a mood for that.

Birthdays used to be a pretty big deal in my house, growing up. Function of being a de facto only child, I think, especially one whose twin died at two days of age and who was touch and go for a while to live himself. I'm also a child of divorce, which meant that birthdays and Christmases were doubled. My mom spoiled me rotten and my dad, who didn't see me all that often, tried to pack a year's worth of affection and trinkets into his limited time with me.

This is very different from the way Eva was raised. She had the parties and such that most of us do, but somewhere in her pre-teen years they kind of petered out: still observed, but not a huge fuss made over them, or her. She was brought up practical and self-reliant and unsentimental. Birthdays, after a time, became childish and unnecessary, and to this day she's very apt to forget them entirely. They just don't hold any importance to her. If she forgets your birthday, it's in no way meant to be a slight on you. After sixteen years with her, she's not entirely clear on exactly when mine is. "Beginning of February, right? Is it the fourth?"
"No, the sixth."
"Oh, right, the sixth."

Yesterday Eva, and several other very important people, conspired to give me a day for the aged. Typo very much intended.

My actual birthday was Friday, and it was just another day. I had a job interview I feel very confident about, and the rest of the day I puttered around between the house and online, fuelled by Facebook love. (Say what you will about Facebook--I'll say most of it right along with you--but on your birthday, it's a nice place to be.)

Eva had a sleep study to replace her CPAP machine; hers has worn out to the point where she's been living without it for four months now, and it shows.  Luckily, this study went much better than the ones detailed above, as she was given a functional CPAP that only had to be optimized. She spent a solid uninterrupted hour in deep sleep, which is pretty telling. She had a great sleep on Friday night.

I still don't sleep very well without Eva there. I spent half the night cursing that the only night available for a sleep study was my birthday and half the night fretting whether the house was clean enough or not for the company I knew was coming on Saturday; that half is why I got out of bed at 3:30 in the morning to, among other things,  shovel the driveway.)

If only one of Saturday's three events had happened, it would have been a great day. The three together made it a day beyond anything I could have dreamed.

First up: a visit from Jim and Ally and Alexa and Lily. This was Alexa's first visit to Uncle Ken's house within her memory. She was absolutely enthralled by everything and everyone here, darting around like a bee at flowers. (Our dog Tux, who we were once told was abused by children, indulged his inner Border Collie and herded Alexa every which way; both he and the cats took a few sniffs of Lily wriggling on the rug and let her be. Such a Very Good Boy is our Tux.
Alexa, meanwhile,  got to play Uncle Ken's keyboard (discovering all on her own that the alphabet song and Twinkle Twinkle Little Star are in fact the same song). Uncle Ken got to read her a story and watch snippets of Bubble Guppies with her (about ten seconds at a time before something else would catch Alexa's attention...) We had a great time, and this first real visit to Uncle Ken's house for Alexa and Lily both is far from the last. I look forward to seeing my nieces grow up.

My second visitor was my friend Susannah, and there's a story here.

Susannah started off as a friend of a friend of a friend, and in and of itself is remarkable for me. More remarkable is the woman herself. I met her for the first time in September and let me tell you, she has lived a life. More like ten of them, actually, punctuated by both highs and lows that few people on this earth  get to experience. But she has spent much of her life, the ups and the downs, fighting other people's battles, living other people's days, other people's agendas, other people's dreams.. In doing all this, she has accumulated untold amounts of passion and pain, and seriously, within seconds of meeting her  I could sense it, all of it, ready to pour out. I didn't know what form it would take when it did, but I knew that when it did, it would be a thing to behold.

Susannah picked up a paintbrush for what sounds like the second time in her life in December and within a month she had  produced these. among many others: 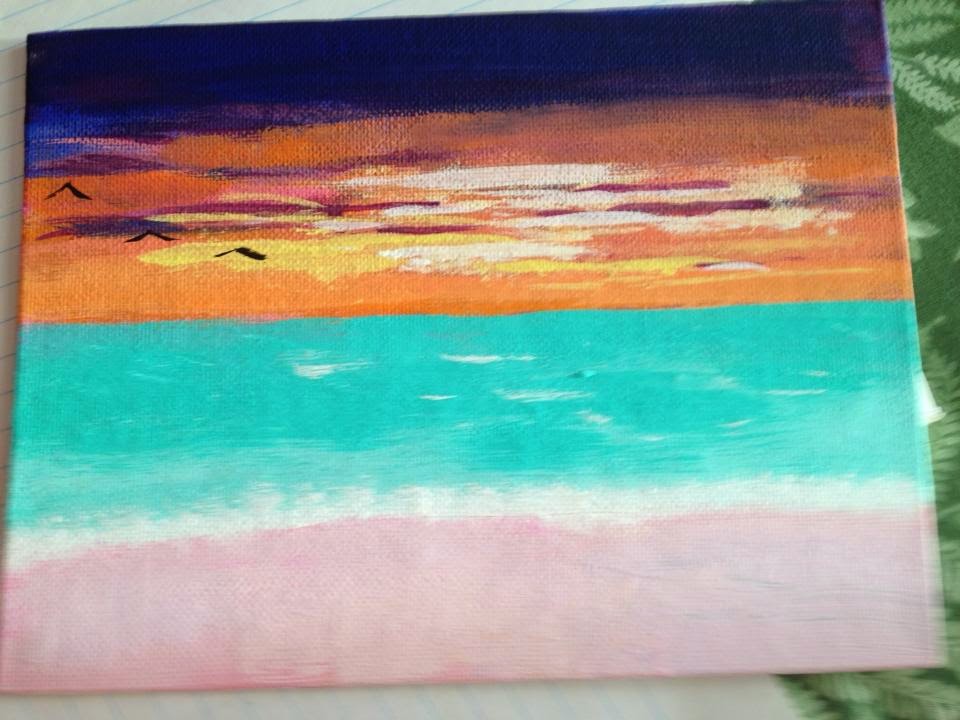 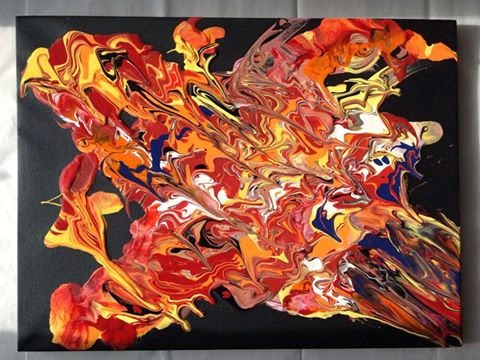 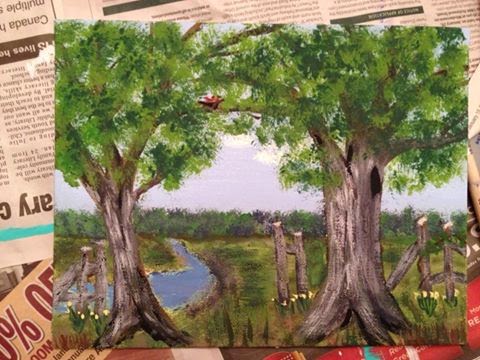 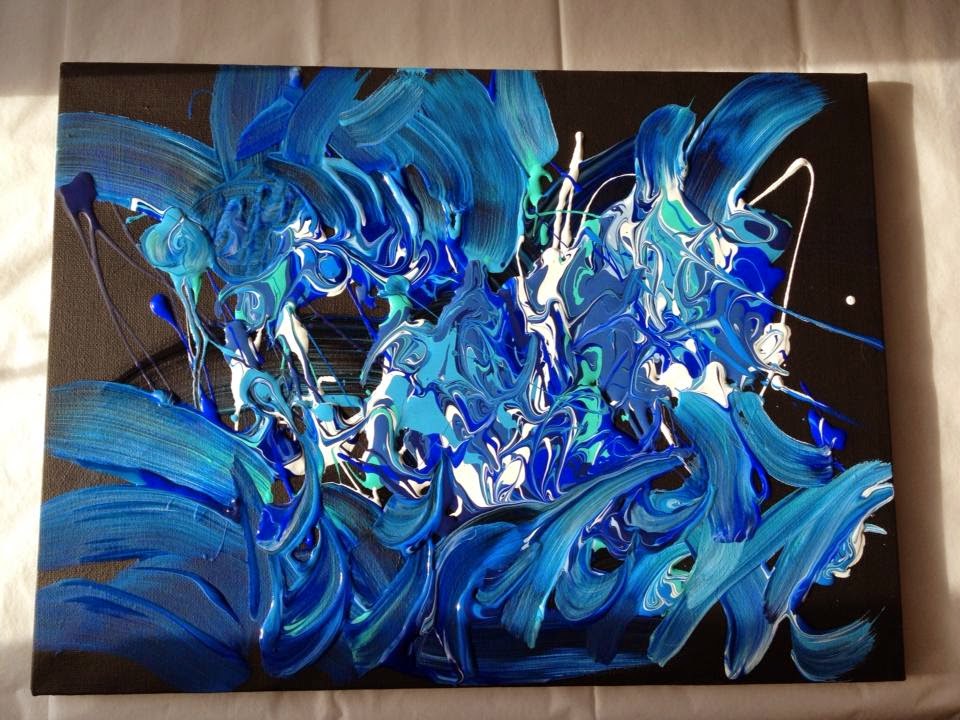 The top one -- "Bermuda Sunset" -- was gifted to me yesterday; we had bought the third, "Spring In The Field".  Susannah has already sold ten paintings, to my knowledge, and I for one couldn't be happier for her or more proud of her. There's a wall in this house we hope to grace with several more of her works over the years. I don't even like abstract art as a rule and there's something about hers that just...hits me. The first time I saw "Maelstrom", at the bottom, there, I actually discovered, for the first time in my life, that the old cliché is a truth: your breath can be taken away.

We had a few art supplies laying around from Eva's experimentation with painting. Eva is what you'd call a polymath. (A poly polymath, hah.) She knows quite a bit about many, many things. She'll pick up a hobby not as a relaxing thing to do but as a challenge to herself...and as soon as she's satisfied she can do it, she'll likely never do it again. This used to drive me up a wall--c'mon, woman, figure out your passion and stick to it--until it dawned on me (embarrassingly late) that her passion is learning as much as she can about as many things (and people) as she can. As such, this house is always going to be going through phases. The paint phase having been extinguished, it only seemed right to give this stuff to someone who (a) was going to make use of it and (b) passionate about it.

And so Susannah came up to get these few things, and graciously stayed for lunch with the whole fam-damily in here. It was such a joy to see her, and we look forward to seeing her again.

Susannah had just pulled out and I had grabbed a coffee and sat down at the computer here when I caught movement out of the corner of my eye. A familar vehicle had appeared in the driveway and who to my wondering eyes should appear but my friends Craig and Nicole.

This was unexpected, and most welcome. We settled down, watched an episode of Mrs. Brown's Boys,  had supper which deserves a paragraph of its own and therefore is going to interrupt the flow of this sentence--

Eva slow-cooked pulled pork in one crockpot for sandwiches  and this potato concoction that defies description of its deliciousness in the other crockpot....Potato cubes and onion cooked in bacon and mozzarella cheese and ranch dressing  and dear God in Food Network heaven, it was amazing. Its sheer amazingness persisted clear into this morning when it onionated into a weapon of ass destruction with which I was able to literally blind my wife as she showered. And thus is how I return the love I was shown yesterday--

--and we watched Walk Hard: The Dewey Cox Story, which was a laugh riot.

Craig, Nicole, you are the embodiment of the saying that friends are family you get to choose.  Thank you so much for everything--the present, the black forest cake (the black forest cake! I believe I'll go have another slice of that) and especially, the chance to see you. Love from both of us to both of you.

Susannah, thank you for the painting(s), both the one we've bought and the one you so kindly gave me. As I say, there will be more to come: this morning we decided on the designated Susannah-wall in our home. Your gift means so much, and so does the gift of your time.

Jim and Ally, Alexa and Lily: thank you for coming and filling this house to overflowing with love and laughter and joy. You are wonderful people raising wonderful people and I'm so glad all of you are in my life.

And Eva, again, thank you so much for co-ordinating this. It's a day I won't soon forget. I love you so very much, there aren't words for it. I'm another year older and another year wiser and I'm fully fortified for the year ahead, which I sense is going to be a great one.

Now if you'll excuse me, leftover pulled pork and potatoes are calling my name. If I time this right, I can Dutch-oven my wife tonight. Oh, the love.