"I Wish I Could Help You"

THIS right here is why I am not a Christian. 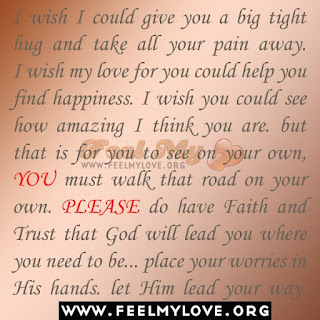 Well, to be fair, there are other reasons. Lots of them:


But all of that, all of that I might be able to get past, and I'd still be hit with that poster above.

That poster is not Christian. It is not godly. It is, in fact, evil.

I say it's evil because it's the backwards of "live". To live is to love, and that poster is telling us that loving is not our job, it's God's.

If "my love for you" is not helping you find happiness, then one of two things follows:
OR
Communication should adequately determine which case applies.

This poster is no less than the total abdication of our responsibility as human beings. I actually have little doubt I could find some Christians who would agree with me on this: aren't we supposed to embody God's love? Are we not all sons (let's use 'children') of God?

Let's stop "wishing" we could do these things and actually TRY TO DO THEM. Hugs work wonders at taking pain away: that's been scientifically proven (oh, no, science, how unGodly!) Let's actually try loving people and see where that might lead. Maybe by telling, and showing, people how amazing we think they are, they might discover that yes, they are, in fact, amazing.

I wouldn't be saying this if it hadn't worked for me. Repeatedly. And on me.

Most importantly, we do NOT walk ANYWHERE on our own (with or without God). We are SURROUNDED by people, animals, even plants to those who are receptive to their energies, all of which can re-center us and remind us who we are. Who are we: we are co-creators. We create our reality through our thoughts, words, and actions. You can choose to use Christian parlance ("the indwelling Spirit") if you want -- words really don't matter, even though wars get fought over precisely how doctrine is to be expressed (and isn't that disgusting?) The point is, we are all here to love each other, not to force people to walk their paths alone and hope (to God) they're praying hard enough that they might be granted some measure of self-worth.

Because that's what this poster says, at root. Problems in your life? You're not PRAYING hard enough.

Grrrrrr.
If I've got any of this wrong, well, I'm cheerfully toddling off to Hell, and I hope to find most of you down there with me. In the meantime, I'm just going to go about loving as many as I can, as much as I can, for as long as I can.
on February 07, 2017