and when there was a Tux
he loved his Mommy and his...Mommy and his Mommy too...
...he also loved the Daddy
and the Mark
and the Bubble-cat
(and his Peach)
and his Cheese
and his Biscuits
and Car-Rides
and Timmy-Treats
and...)

so many people and things our Tux loved.
And we loved him.

God, we loved our Tux.

He would have been killed if we hadn't taken him.

That's the thing I try to keep top of mind as Mommy takes him on his last Car-Ride today. (Mommy and Tux came to pick up the Daddy at work, as well...two Car-Rides in one day!)

He would have been killed if we hadn't taken him: they made that quite clear to us at the Humane Society, where he'd languished for almost two of his six months waiting for someone who could deal with his separation anxiety. I was a bit reticent on that, but they kept giving us things...snacks, a leash, I get it, we're this dog's last hope.

Ours, too, in a way. We had been denied children not long before Tux joined our family. That's also hitting us hard tonight.

Getting him in the car took three people and a small pile of expletives, I remember that. I THINK he thought the car was just another cage we'd leave him in. But when we got in the cage with him and took him to what soon became known as Tux's House, well, then his attitude towards Car-Rides did a complete 180.

As long as we were home.

If we weren't home, we'd better have put the garbage somewhere he couldn't get it. And if the sink wasn't empty when we left, it would be when we got back, its contents scattered from arsehole to breakfast, and how he got silverware out of the bottom of the sink is a mystery for the ages. You'd laugh at it and clean it up and remind yourself next time that the house needed to be Tux-proofed.

He mellowed as he aged, as dogs do. His love for Eva became the tiniest sliver less all-consuming...not so as anyone would notice, mind you. Tux loved his Daddy 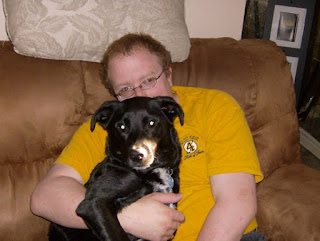 but he lurved his Mommy unto his last day. Guests in our house, once barked at, became possible sources of affection for our Tux.  It's fair to say that that Puppy-Tux, whom the pound saw fit to kill because of his rambunctiousness, grew into a docile and very friendly dog indeed.
________
Very early, I got into the habit of calling him Tuxes. I have no idea why...there was only one of him, with his curly-fry for a tail and his INCREDIBLY persistent paw that would come up every time he met you. Nothing we tried would shake him of that shake-a-paw habit, and we never knew what we were supposed to do with that proffered paw.  Accept it and he'd jerk it back and offer it again; say "NO" and it would sink, and then hover, as if to say I know I'm not supposed to do this, but I literally have no idea what else to do.

Tuxes, though. It was "outside-Tuxes" and "cuddle-Tuxes" and "does Tuxes want his Things?" (said Things being Cheese and Biscuits). Very occasionally I would invite him to "Pre-wash" my dinner plate, said invitation shamelessly stolen from my Dad.

Tux knew that "he" referred to him. You had to be very careful how you phrased things in his presence. It was time-sensitive, though. Say "cheese" in the morning and Tux would perk right up, because Cheese was one of his morning Things. If you said it at any other time of day, though, he'd let it pass unless it was directed right at him.

He loved squeak toys. His companion, Georgia-Peach, loved them too, except she loved to destroy them, and so for many years Tux had no toys. When Peach went where Tux is now,  we stopped on the way home from the vet to buy Tux a squeaky squirrel. He accepted it but did nothing with it for twenty four hours...and then suddenly we heard it squeaking and knew he knew Georgia wasn't coming back.

Everyone has tales of how smart their pet is. For me, there are two instances that stand out in our Tux's life to that end. The first happened more than once. Tux, who never was much of a fetch-and-retriever despite being a Lab/Collie cross, would go--without the slightest bit of prompting from us--and retrieve Georgia's Georgia-Ball if it got too close to the Baby Gate of Doom. He would drop it right in front of her, then go back to his place on the couch.
The other thing he did one night in bed, glomming to Eva (did I mention how much Tux lurved his Mommy?) Eva, exasperated, said "turn around, Tux". That's not a command we'd ever given him before. Nevertheless, he got up, turned around, and laid down again. It wasn't a co-incidence, because from that moment on, "turn around, Tux" was part of his vocabulary, right in there with "kisses from the Tux" and "get the squirrel". That last was not his squeaky squirrel ("Squeak")...that referred to actual squirrels who lived in the Squirrel's House (our shed). Tell Tux to "get the squirrel" and he'd go to one of the trees, where the squirrels would taunt him. Tell him to go to the Squirrel's House, and he'd unfailingly trot right to our shed.

Tux was happy when Mark joined his pack. He and Mark developed a very strong bond in a very short time.
_____

He was, all things considered, a pretty healthy dog. Needed hypoallergenic food, had dental surgery once when one of his teeth rotted and his mouth smelled like death. But other than that he was fine until he got cancer in his nose, of all places.

It made it harder and harder for Tux to breathe. Eventually it broke his nose and deformed his face and once again we were hit with the enigma that all pet owners eventually wrestle with: is it time?

A hard decision to make in Tux's case. From the back of the nose to the tail, as of this afternoon, this was still...mostly...Tux. He still eagerly accepted his Treats and his  Car-Ride to come and get the Daddy at work today, both with alacrity. But you never know when that cancer was going to spread into his brain and turn him vicious in an instant; even more so, you don't know when that tumour was going to swell and make it impossible for Tux to breathe at all, even just when sleeping. He'd only eaten about a quarter of a cup of actual food in the past week.

Mark took Tux for a Car Ride the other day and prepared him. Tux was reminded of the names of all the animals he would soon be meeting on the other side: Mark's beloved cat Olivia, with whom Tux had a brief acquaintance; Georgia-Peach (who has been top of mind for me the past three weeks or so); a bevy of other pets, both his and ours. He was told to say hi to them for us and to let them know we'll be with them--and him--soon.

Tux went for his final Car-Ride just before 5:00 p.m. today, with Mommy alone. This was to keep him calm: the vet was not his favourite place to be as it was and let's just say Eva still has the ability, when called upon, to cloak her emotions. Ken never had that ability. Ken's been in a bad state all day. Mark, too.

Tux died a little after 5:00 p.m. on Mommy's lap, and so he died as he lived, and he died a happy Tux. He is now where the Good Boys go, and we will see him by and by...actually, I wouldn't be surprised if Eva sees him in the next few days and weeks. Love that strong doesn't let a little thing like death get in its way.