I'm not going to say I was dragged. I didn't even go under protest. But I can tell you I did go mostly for form's sake.

It was my five year old  niece Alexa's very first dance recital today. I was really looking forward to seeing her dance -- don't let anyone suggest I wasn't. This may sound cold, uncaring, distinctly un-Ken-like...but I wasn't really looking forward to seeing anyone else dance. Even though this was, in my mind, a little thing involving, what? Ten? Maybe twenty students and an audience of three times that, tops?

It was probably a good thing I didn't ask Eva for details before we left. She would have told me this recital was being held not in a small dance studio, but in the gymnasium of Stratford's Northwestern Secondary School, the school Eva herself attended once upon a time. That gymnasium is positively cavernous, with capacious balconies on two sides of it, and mirroring the parking lot outside, it was absolutely PACKED. Striding across that darkened gym with program in hand, the scale of this enterprise kept ratcheting itself upwards.

I opened the program in the gloom and some things became clear.
One, this was being put on by the On Stage Dance Studio, and was indeed much, much larger than I had anticipated. It was also multidisciplinary. Alexa is in a program called 'Dancin' Kids"; there's ballet, tap, jazz, lyrical, hip-hop...it seemed like everything short of Morris dancing was part of this program. WELL over a hundred performers in a myriad of troupes. Thirty-eight (38!) dance numbers. And the first one lasted twenty minutes. We came in the nick of time and had to search for a parking spot...it was standing room only by the time we got in there. I did some quick math in my head.  Even cutting the rest of the acts to ten minutes apiece, carry the eleven I'm going to be standing here for SIX HOURS.

Meanwhile, I'm trying to find Alexa's name on the program. It refuses to be found, at first, and then there she is #14 in the first act.

Better settle in. As much as one can while standing.

It dawned that me, of all people, shouldn't poo-poo dancing overmuch, because dancing comes with music. The entire program was called "The Great Outdoors", and each number was themed around something outdoorsy. Almost every genre of music imaginable, and dance to suit. Of course the primary attraction for something this would be aural, for me...and yet it took all of a number and a half before my eyes joined the party.

Impressive. Highly impressive, even before Alexa came out.

Please note--no photos allowed, no video allowed. They did, apparently, film the entire production, to be made available as a download at some future date. I will have to resort to word-pictures.

The choreography was intricate and, to my novice eye, flawless in number after number. I noted the presence and excellence of not one but several women who could be described, unabashedly, as "plus-sized"...and a like number of women who were quite tall. I know from reading this that the latter is almost as much of a stigma in dance as the former.

The other thing that impressed me -- maybe it shouldn't have, but it did -- was the instructors. They joined their charges on stage for every single number. That had to be tiring.

At one point the "Macho Outdoorsmen" strutted out to the tune of "Macho Man"...and both Eva and I wondered where they had managed to find an entire troupe of boys. Turns out they weren't. Boys, I mean. All but one (or possibly as many as three of the nine performers, allowing for unisex names) were female, but padded and performing so convincingly as males that it utterly fooled us.

Okay, yeah, I was enjoying the music, which veered all over the place from the Carpenters to Pitbull to Hans Zimmer. And marvelling, as I watched the action, at just how much of my mind is taken up with song lyrics. A number called 'Letters from Summer Camp' came up, accompanied by this old chestnut, which I haven't heard in years and years and years. But which, as it turns out, I still have memorized.

These are amazing dancers. Much, much better than I could ever be...I used to joke in high school that I dance like a rusty robot. I don't lack for courage to perform in public, even knowing how bad I am...at high school dances I would clear a space and gyrate wildly all over it, looking not so much like a dancer as a combination epileptic/Parkinson's sufferer...because by high school I had learned the magic necessary to turn malice into mirth. To wit, if you do something so deliberately over-the-top as to make it obvious you're laughing at yourself, very few people will laugh at you. They'll laugh with you, instead.

But I doubt I could summon even a thimble full of the grace I'm watching here. Even the frantic and frenetic is composed and smooth.  There was no pause between numbers. One act would be coming on stage left as another exited stage right, and everything was bopping along at a crazy pace, after that first, extended opening number.

The number before Alexa's was called 'The Weather Girls", a medley of "Winter Wonderland", "Heat Wave", and "It's Raining Men". That last morphed into what sounded for all the world like the initial flourish of Gloria Gaynor's "I Will Survive"  (the telltale first iteration of the theme was buried by crowd noise). In the space of half a second, I thought

they're not really going to have five year old girls dance to THIS, are they?
this really does fit with the campy disco thing established by 'It's Raining Men', though
which one is she? can't tell from way back here

and the music resolved into a much more appropriate song for five-year old girls, and in fact the first recording I ever heard of the tune...Anne Murray singing The Teddy Bears' Picnic.

And out she came with seventeen others, Alexa, all pink and sparkling and dancing. Not just following the routine, either, but actively helping the girls around her follow, too. I was so proud of her, pirouetting and stepping right on every cue.

Five years old, and living up to her middle name.

There were a few acts after hers before the intermission. Had we been able to secure seats, I might well have stayed for the second half, despite nobody I know dancing in it. That was thoroughly enjoyable and I eagerly await watching my niece dance again.

Picture snapped by Eva afterwards, as we presented the tiny dancer with a well-deserved bouquet: 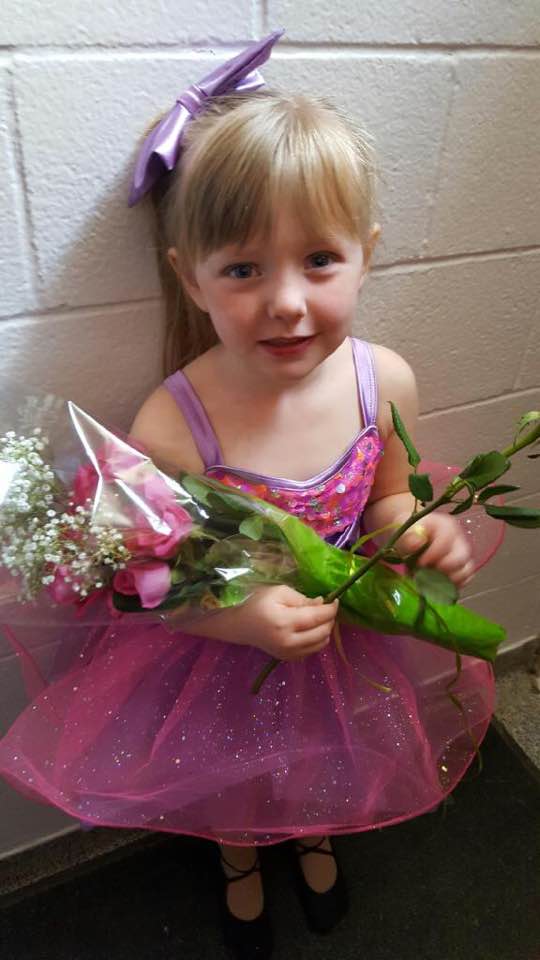 We love you, Alexa Grace.