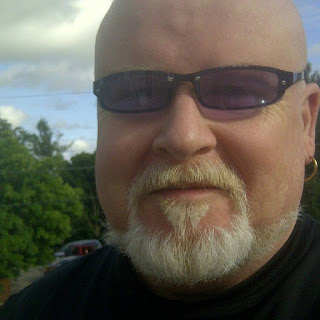 ...and we couldn't be happier.

In case you missed it, this happened to him.

I will spare you the details of his three-times-longer-than-expected hospital stay; his privacy, if not dignity, are worn as thin as a nearly transparent hospital johnny as it is. There were ups, there were downs, there were anticipated discharges and unanticipated setbacks, and...
...and stage one is over now. Mark is home.

The house hasn't felt the same with him not in it. Our cats have moped around, seemingly just Mark-ing time until he returned. A little solitude is a nice thing now and again, but too much of it is wearying.

He looks good. In some ways better than he has since I have known him, which sounds ridiculous until you consider his heart is getting its full supply of oxygen for the first time in who knows how long.

Now begin the changes. All of them much needed.

Diet is important for someone coming out of heart surgery. Lean meats, low sodium, lots of fruits and vegetables...all things I have never had to think about overmuch (it's a good thing I like chicken, mind). Now I do. Because we're undertaking the same diet he is.  We are doing this for four reasons.

1) It's convenient. Nobody should ever have to cook more than one supper, as far as I'm concerned: parents who willingly do that for their kids are masochists.

2) It's cheaper to buy one diet in bulk than to buy for two separate ones.

3) It's not as if Mark's diet is unhealthy for US.

4) What kind of monsters would we be to bring home pulled pork poutine (which just happens to be one of our favourite things in the world) and smack our lips over something Mark can't have? Who would be that fucking cruel?

This dietary thing also involves portion control and a radical (for me) adjustment in how and when I eat. See, up until now, I have skipped breakfast most days. I have done this because quite frankly I am usually still full from supper. I go to work, I have a moderate sized lunch, I come home, and I could eat the asshole out of a dead camel. My suppers raise eyebrows. And paunches. Hello Mr. Buddha-belly.

So I just had a delicious chicken pot pie, prepared with fresh veggies instead of frozen, and I ate about three quarters as much as I would have normally. Scaling down in stages. It helped that I didn't work today.

Tomorrow, I essay some kind of breakfast.

I've vowed this before, and followed through sometimes for as long as an entire fortnight. Truth is, I do get a fair bit of exercise at work (the only thing from keeping my gut from expanding into the next postal code) But with Mark mandated  to get exercise, again, we may as well join him. It isn't as if it will hurt Eva or myself. Walks t at first, eventually bike rides. I can categorically state I will never be like my marathoner friends Rachael and Nick...but I will have every excuse to walk, not just for Mark but also for

A Golden Boxer will be landing in our home next month. This is a fair bit ahead of our most ambitious schedule for -- I hesitate to say "replacing" the Tux and the Peach....no dog could replace either -- but I think you know what I mean. At any rate, just like you can never tell when a love of your life is going to come along or from where, you can never tell when a pet is going to announce itself to you. Our cats, Mooch and Bubbles, showed up in much the same unexpected way, and they're both of them the best cats I have ever had.
Eva saw a picture of the new puppy 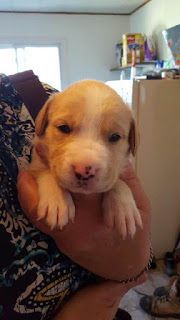 and fell in love. So did we. She's got a little bit of Peach-face in her (though Peach was a brindle) and we just adore the freckles. Name unknown yet -- she's going by 'Freckleface" around here. Apparently she's a tomboy, she beats up her brothers daily.

Having a puppy means lots of exercise. It also means we get to train it right. Tux in particular was a very smart and well-behaved dog, but he had behavioural tics we couldn't get out of him on account of his coming into our lives too late.

Also having a puppy will mean keeping this house cleaner, which we have already started doing for Mark's sake. I'm trying to get back into the ritual of doing dishes after dinner each night, as opposed to -- never you mind. I've rediscovered something I once knew...that keeping a house clean is much easier than getting it clean.


There are still more, unrelated, changes coming, which will be detailed in my next blog entry. In the meantime, Mark is home, and we couldn't be happier.
on June 25, 2017