Spending the day, mostly, at my dad's.

It's very rare to be in the house the entire day up here. Things you take for granted in the city, like mail delivery and garbage collection, are quite different in Britt. Neither comes to you: you have to go to them.

The village is an elongated string of houses along highway 526, with exactly one store (called St. Amant's and pronounced à la française "Santimawns", which never fails to tickle Eva). Dad's house is about three klicks downriver past the densest part of Britt where the post office is; getting the mail thus requires a vehicle or someone really into walking.

So does the dump, which is over in Bung Outlet (sorry), about a fifteen minute drive away. This may have been the first dump trip I've ever made up here without seeing a bear. At the intersection of highway 69 and  the Byng Inlet Road (highway 529) is the closest store at which a newspaper can be purchased, so even obtaining one of those is a bit of a trial.

To further, um, drive home the fact you're not in a suburb, your neighbours and friends -- the two are largely synonymous up here, at least for Ken Sr., who is very well known and almost universally liked -- are rarely within walking distance. An exception for my dad would be his friend Billy, three doors downriver. His place, let me tell you, is a showpiece. And today I learned there's a little more than I thought involved in keeping it that way. 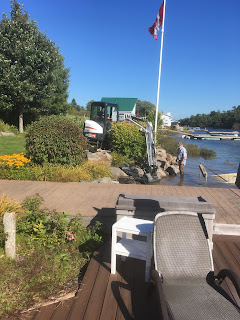 See that excavator? Billy has rented that for probably a week and enlisted friends to man it. And what they and it are doing is painstakingly, laboriously, rearranging rocks.

This is Canadian Shield country, some of the oldest rock on earth, and there's a hell of a lot of it. The water in the Magnetawan River, as I said last entry, has been extremely high of late, and it's washed out quite a lot of Billy's rocks. These are being put back into place, one by one, for what I at first scoffed at as purely cosmetic reasons. It turns out those rocks don't just sit there and look pretty, they also hold the bank up. This, then, is important work. It's also mesmerizing, at least to my dad: I truly think he could sit there and watch that thing work all day. Me...not so much.

I did help dad with a little outdoor work later on...well, for Ken Jr. values of "help", to wit: I held old skids while dad cut them up with a chainsaw, gathered the pieces, wheelbarrowed them across the property, carried a couple of heavy things...this is all stuff I can do. Give me a chainsaw and people in different postal codes will very shortly find themselves missing limbs.

I was just talking to Eva this morning about this. My mechanical aptitude is zero to about seven decimal places, and I can lay the blame for this at the feet of whatever the fuck is wrong with my eyes. Even with corrective lenses, my judgment of distance is absolute shite. I'll go to hand something to my wife, and it will be just out of reach for her, and the closer she extends her arm to grab it, the more I'll unthinkingly pull it back...
Or take using a whippersnipper, which is something I have proven I simply can not do. There the problem is twofold: I can't see the filament, and I certainly can't judge where it might be in relation to that stump...or the house...or whatever else it is that's about to snap said filament.

Anyway. Those tasks performed, I grabbed a Palm Bay cooler (strawberry-pineapple, mmmm) and settled down to read some more. Now I'm reading Justin Cronin's THE PASSAGE and really enjoying it. How refreshing it is to concentrate on one story at once and really absorb it. All the better if you can do it in a setting like this: 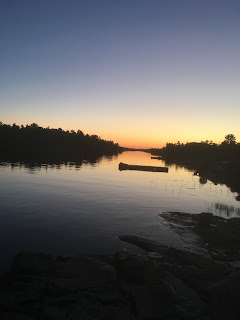 Dad has obtained the service records of two of his uncles, Russell and Ernest Buckerfield, both, like him, born in Parry Sound. He gives them to me to peruse. Fascinating.

First, there's the weird sensation I got handling papers (well, colour photocopies of papers, but let's not ruin this before we start) originally typed up by persons long deceased, pertaining to other people long deceased, one of whom I can remember. (I never met Ernest; my 'uncle' (grand-uncle) Russell died in, I think, the early 1980s. Russell was born in 1897 and enlisted in 1917, as I recall. He survived the war unscathed. Ernest was not so lucky; he had survived a bout with typhoid before enlisting and was wounded (right foot, I think) in the war. But those details were the least of what I could glean from the sheaves of paperwork dad had handed me.

The Canadian military ran on paperwork then, as it does now, I'd imagine. There are papers for every conceivable action and probably inaction. Diving into it, I was struck by little things. Religion, for instance, was a VITAL detail (probably so as they'd know what sort of words to say over your corpse?) It was asked for in five or six places, and your options were rather limited: you were C of E, Methodist, Presbyterian, Roman Catholic, or Jewish. (Both my uncles put down Church of England). No option for 'nothing' -- were atheists completely unheard of?

Addresses were slipshod things. My uncles put down their addresses, or next of kin addresses, as variously "Parry Sound" or (only in one place) "Isabella Street, Parry Sound". I can't recall how Burk's Falls got into the equation, but I do recall it was misspelled every time: "Berk's Falls" or "Birch's Falls".

Pay. It was really hard to decipher the pay records, but it looked as if my uncles were paid between $20 and $35 a month -- I think the latter figure went to Ernest as a combat bonus, but I can't be sure. And running that through the inflation calculator yields an answer that makes no sense to me: $293.03 a month in 2017 dollars? No way. Maybe that pay was weekly? Further research indicates that Canadian Expeditionary Force soldiers were paid the princely sum of a dollar a day, with a dime bonus for overseas service. That would work out to $33 ($483.51)/month, and now I'm really confused. Let's move on. Suffice it to say I was quite interested in what I was reading, even if you're not.

Parry Sound, population 6,408 (2016) was my second home growing up. That population figure is VERY misleading; in the summertime, sixty thousand people live in the area -- three for every island, you might say -- and six hundred thousand pass through. I remember when I worked at Sobeys: every April I'd survey the intra-company job opportunities and see something like this:

Yike. The whole town is like that: crazy in summer, dead in winter. It's also beautiful, and chock-full of memories for both Breadners. My aunt and a cousin still live here, and so do Ronnie and Mary, close friends of my fathers whose children, Hayley and Richard, were good friends of mine when I was younger.

Hayley, in fact, is there when we stop in to see Ronnie and Mary. I haven't seen Hayley in 3.6 eternities, and we share some laughs before I move on. Schedule to keep, you know, and something else important to do here.

If you punch "best used bookstore Ontario" into Google, you'll get three returns...one in Toronto, one in Collingwood, and Bearly Used Books in Parry Sound. Also known as heaven on earth for me: 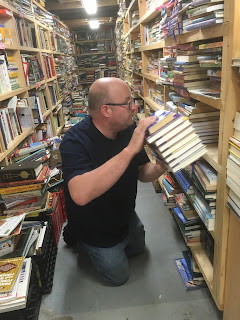 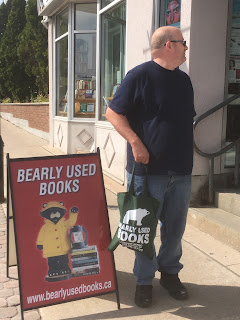 150,000 volumes. The staff tell me that people routinely come in from eight or more hours away, on road trips specifically to come to this store.

Dad has brought some books for store credit and so the five I pick turn out to be...free. Can't beat that.

Dad wants to bring me back to Depot Harbour. I've been there once before with him, back in the eighties, and it was one of the eeriest experiences of my life.

Depot Harbour is the deepest freshwater harbour in the world. It's also the site of what was once a thriving town of 2,600 people, as recently as 1929. Today, there's virtually nothing left of it: the ruins of the old railway roundhouse, looking almost like a bastardized Colosseum; foundations with nothing atop them; sidewalks and fire hydrants, but no trace of streets. A bit creepy, a bit sad, and for me, at least, entrancing.

But it was not to be. To get to Depot Harbour by car, you must traverse the Wasauksing Swing Bridge. 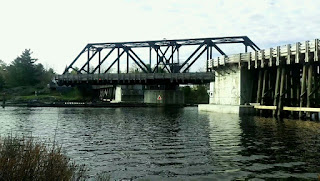 I jumped off this thing, once (from road level, Dad insists I mention, since he says he's jumped from the top of it). No height figures I can find online, but that is clearly much too high--even Dad says it's something he's done ONCE.

When we got to the bridge, it was about to swing open for a couple of boats to pass: 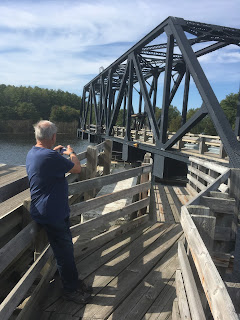 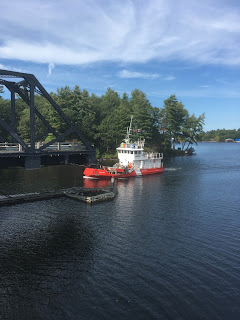 This process takes time, and we didn't have a lot of that. So after taking these shots, I went to catch the bus. And my day went sour.

This wasn't the worst bus experience I've ever had, but it was up there. I had a seat to myself, so that was all right, and the bus only made two stops between Parry Sound and Toronto this time (Barrie and Yorkdale), so that was all right. But the woman across and three seats back was NOT all right...she was very drunk.

Okay, so my attitude on alcohol, like most of my attitudes, has mellowed over time. I am now firmly in the 'social drinker' category -- preferred drink, as you may have sussed out, vodka coolers, although I can abide anything but Scotch (tastes like gasoline) and beer (tastes like moose piss). I have no problem drinking, or with others drinking. But I will ALWAYS loathe drunks in their drunken state. Always.

This woman was alternately angry and weepy, and the entire bus couldn't help but follow her through every twist and turn and hiccup. The bus driver eventually pulled over and came back to talk to her and tell her to shut up (gently, more gently than I could have managed).

That worked for all of a minute and a half, and then she was back at full throttle. My head was killing me. I wished wished WISHED I had thought to bring my iPod and headphones in my carry-on bag.

When we pulled into Yorkdale, we were instructed to stay seated. Police boarded and escorted the woman -- who was in her weepy stage at that point and went (I can't say "quietly") without resistance. They quickly interviewed her seatmate (God, what an awful word that is in this context) and ascertained that

The delay there coupled with the usual ridiculous traffic between Yorkdale and the main terminal meant that I couldn't go anywhere to sit down and eat dinner or I'd miss my connection. I grabbed a bagel with cream cheese, boarded the Greyhound to Kitchener...

...and that turned out to be another milk run, such that I didn't get into town until nearly 10:30.

Exhausted. But home, in my own bed.