NOTE: In this blog, which I have been mulling over for months, I'm going to use some terms that may not be familiar to some of my readers.

CISGENDER, often abbreviated "cis", is the opposite of transgender. If you are cisgendered, your gender identity matches the sex you were assigned at birth.

GENDER NON-BINARY is an umbrella term that denotes any gender that is not explicitly male or explicitly female. There are lots and lots of categories that are non-binary, and each person who identifies this way tends to have a personal set of descriptors for themselves, which usually include pronouns that aren't "he" or "she".

This may be gibberish to you: while many people have heard the word "transgender", it's a word that is -- for whatever reason -- deemed threatening, and so many don't investigate it.  (Incidentally, I've never understood how anyone's identity could be threatening. The presence of a gay man won't turn you gay; my polyamory is mine, not yours;  the existence of any number of words between "male" and female" on a spectrum does not invalidate either end of the spectrum. 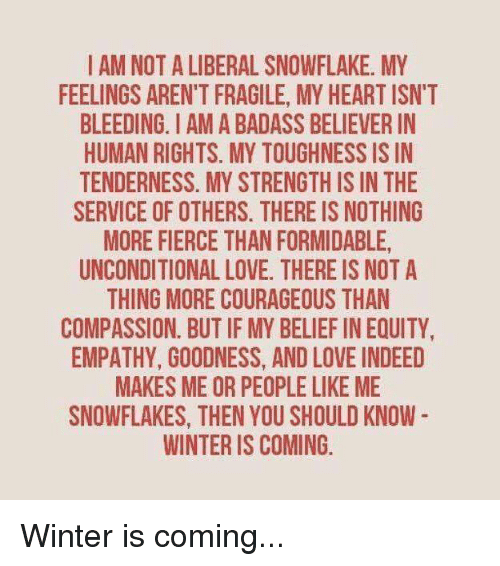 R-E-S-P-E-C-T, find out what it means to me...
--Otis Redding, made popular by Aretha Franklin


and that's just off the top of my head. What he wants to do, in short, is turn the clock back to about 1950  He and his acolytes say this is "Making America Great Again" -- and the colossal irony is that circa 1950, America was only great if you were a straight white cisgendered male. For pretty much everyone else, America sucked, and for some classes of people it sucked pretty goddamned hard. The vast majority of people who AREN'T  straight, white, cisgendered males have precisely zero interest in reviving an era where niggers were lynched for sport, fags were beaten, and broads "knew their place". And so these people are seeking -- quite reasonably, you might think -- to shut this shit down by virtually any means at their disposal.

Aside: I  deliberately used some words in the preceding paragraph which are very to extremely offensive. These words and many, many others like them were so common in 1950s America as to be utterly unremarkable. Which just goes to illustrate that moralities and the words we use to enforce or flaunt them DO change over time. A couple of further examples of this: the most offensive word you can call a woman -- a word so vile it's often abbreviated to "the c word" by people who have no trouble whatsoever reeling off strings of profanities -- was once the common and accepted term for female genitalia, a word no worse, and probably more wholesome, than 'pussy' is today.  Another: "idiot" comes from the same root as idiom and  idiosyncratic. It originally was used to describe a private person with no interest in public affairs. This was a grave sin in ancient Greece, and you can see how its current meaning derives from that. But an 'idiot' at one point wasn't stupid, per se.

We live in an accelerated and constantly accelerating culture. "Cunt" took centuries to gain its nasty status. "Slut", which used to be a perfectly acceptable word meaning "scullery maid", also took centuries to (d)evolve into its current derogatory meaning of sexually promiscuous woman. Meanwhile, "nigger" took decades to become a taboo word and "fag" took even less time to go from normal to offensive.

The speed of change can catch even well-meaning people off guard. "Gay" is a good example. It originally meant "happy", "carefree", or "bright and showy"; that latter meaning gave rise to its adoption by homosexual men to describe themselves. Rampant homophobia lent "gay" a whole bunch of ugly prescriptive meanings: in any schoolyard or locker room you would often hear "that's so gay!" meaning "that's stupid". This, too (and thankfully, from my point of view) is on its way out.

You might not think the word "gay" is such of a much. I'll be honest: even after I lost my homophobia (by meeting gay people, not to mention finding out that people I knew and loved were gay)...I simply didn't notice how often people use "gay" to describe ugly, stupid things.

Just goes to show you the blinding effect of privilege. Privilege renders oppression invisible. Privilege is suggesting that since you haven't personally been affected by something, it either doesn't exist or can't be important. It's been almost thirty years since I was routinely called every gay slur in the book; I'd forgotten how much that hurt.

Open your ears and pay attention to  how often "gay" is used as a synonym for "stupid". I like to call that out: why did you use that particular word? People will hem and haw (and probably call me gay) before admitting, sometimes sheepishly and sometimes defiantly, that gay people are, BY DEFINITION, lesser.  The sheepish people have learned something. The defiant ones get cut out of my life.


"Gay", "nigger", "slut", "tranny", and on and on and on -- you could fill a dictionary -- are just words. It's when those words get arranged into sentences, paragraphs, and presentations that things can get REALLY threatening.

Students at a university learn that a prominent right-wing TV personality, or newspaper columnist, is slated to speak at their school. They mobilize. They issue threats of violence; if the speaker is undeterred and shows up anyway, they mob him or her and act so unruly that the speech is either cancelled or goes unheard. The speaker then announces that she has been "silenced" by a bunch of "liberal snowflakes" who are "too fragile" to "accept reality". Her audience eats this up: she becomes a martyr.

There may actually be some "snowflake" students who really can't stand to hear an opposing idea. Most of these people, though, I suspect, simply choose not to allow hatred to be given a platform. They know EXACTLY what sorts of things will be said on these occasions. They've been hearing those things all their lives, and always, always it's about making them less than human.

Imagine if you can't ever be free. Imagine if the bullying never ends. If, for example, everywhere you go, every strange man you meet, you have to be hyper-aware of both his actions and your own, because at any moment, he might jump you. Oh, he was only catcalling you? How to respond to that? Smile and you're encouraging him; walk faster away from him and you're provoking him.

Imagine you're a Muslim and the President of your country has mused about rounding up and deporting all the people like you. Or putting them in camps. Officially sanctioned talk like that has emboldened some people to firebomb mosques and randomly attack people who look just like you. Do you really think the people that mean you harm should be allowed to whip up support?

Imagine you're non gender binary and a bunch of Republican politicians have decided you (a) can't serve in the military; (b) can't go into the bathroom that matches your gender identity; (c) you can't even be addressed by the term you wish to be addressed by.

If you identify as male or female, you may not comprehend this whole business of "personal pronouns". You may insist that everyone around you be a "he" or a "she". Except what you don't understand is that some people are neither "he" nor "she", and demanding they be one or the other is not-so-subtly questioning their very existence. "Zie" and "Zir", or any number of alternatives including "they" singular, undeniably take some getting used to. So get used to them. The people who use these terms have have had to get used to much more trying circumstances than you being asked to use a word you may never have heard before.

The dichotomy between 'conservative' and 'liberal' is ever-present today and seems to be ever widening. There are many reliable indicators of one's conservative or liberal leanings. I'm about to put forward one you may not have considered: RESPECT.

Liberals usually believe that any human being, by virtue of being human, should be accorded a basic level of respect.

Conservatives don't like this view: they tend to believe the only people entitled to respect are those in authority.

Caveat: both sides are increasing basing their respect for an individual on that individual's "purity" -- by which I mean strict adherence to liberal or conservative dogma. This is a non-trivial problem, but it's not new: politics is religion by another name, and religion has ALWAYS divided people into us and them, the faithful and the heathens, the saved and the lost.

"(Political Correctness is) the communal tyranny that erupted in the 1980s. It was a spontaneous declaration that particular ideas, expressions and behavior, which were then legal, should be forbidden by law, and people who transgressed should be punished. (see Newspeak) It started with a few voices but grew in popularity until it became unwritten and written law within the community. With those who were publicly declared as being not politically correct becoming the object of persecution by the mob, if not prosecution by the state."

This takes for granted a bedrock conservative principle that morality is unchanging and absolute. Like several conservative principles,  this one is demonstrably false -- or do you believe, as the Aztecs did, that human sacrifice is both beneficial and a great honour? Do you think slavery is a Good Idea (tm)?  How about polygamy? Hey, it's all over the Bible.

The amount of free-flowing hatred out there is daunting, to say the least. And this is the culture the social justice warriors want to change. Their thought -- it's a pretty valid thought, in my opinion -- is that you can't change the culture if you keep giving agents of the old culture a chance to perpetuate it.

But here's where I'm torn. Shutting the hate down before it's spewed doesn't seem to be working. If anything, it's backfiring. Instead of confining themselves to hating minorities, it's getting more and more common for the bigots to ALSO hate those who advocate for minorities -- "social justice warriors", which is usually intoned with a sneer. How "social justice" ever became a bad thing is a mystery for the ages.


It's a truism that liberals are tolerant of anything but intolerance. It's also a truism that conservatives demand the right to be intolerant--because of that unchanging, absolute morality they force themselves to believe in.  I'm not sure there's a solution to this, a road towards unification. Either one side has to agree to be less than human or the other has to agree to give up calling people less than human, and I don't see either side budging any time soon. Put me down on the side of social justice, though.  I am, proudly, a social justice warrior.