"Hey, everybody, let's go party because tomorrow, we write the date with a slightly different set of pencil strokes!"
--Ken, most years until this year. 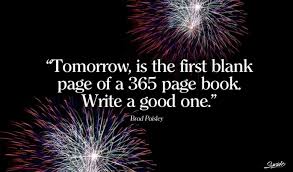 I've always been cynical about New Year's Eve. Being employed as a customer service specialist at Southland Canada -- which, translated from resume-speak, means being a 7-Eleven till jockey -- for several years can do that to a person.

First, I'd forget to book the night off in June like everybody else. Then, as it drew closer, I'd remember the ghosts of New Year's past...various bodily wastes, widespread vandalism, and hurled obscenities...and my stomach would clench. That'd be a week before. For the actual shift I would show up with my head and heart both pounding, my guts bouncing, and every joint aching as if I was an arthritic old man.

After I left that hell, I vowed to my wife that never again would I find myself adrift off the Isle of Insanity, somewhere in the boozy sea, on any December 31 in the future. That, like every other vow I've made that DIDN'T have something to do with self-improvement, is a vow I have kept.

If you didn't catch that last, I'm shite at New Year's resolutions. I tell people, cynically, that I don't bother with them because nothing in my life needs solving, let alone RE-solving. But of course that's bullshit--anybody with two eyes to see my life knows there is PLENTY of room for improvement. I've whiffed and I've waffled about things like career changes and writing full time and blah blah blah. I could resolve to do these things this year and you'll read them and scoff and you'd be right to scoff. I could give excuses and you'd scoff harder and you'd be right to do so. I'll fall back on a lyric that was my life's anthem circa 1995:

I go to school, I write exams
If I pass, if I fail, if I drop out, will anyone give a damn?
And if they do, they'll soon forget
'Cause it won't take much for me to show my life ain't over yet..."
--Barenaked Ladies, "What A Good Boy"

And my life AIN'T over yet. Parts of it may be just starting; other parts are humming along swimmingly, and as for the rest of it? It will fall together. I started to feel like things were falling together last year; forgive me the glacial pace. I have an infinitude of patience for others and must occasionally beg for it for myself.

I'm not going to write about the world outside my tribe. Not now. If you're as sick of the world as I am right now, I wouldn't blame you and you can't blame me back.

So instead I'll beg your indulgence and write about me and us.

I joined a church this year. Something I swore years ago I'd never do. I haven't been to Grand River Unitarian as often as I should--once a week probably isn't often enough, seriously, for all that place offers. I know I said something about New Year's resolutions above, but if I could make one and make it stick, that'd be it. That place is a spiritual sanctuary for me and I need to start both giving and receiving the abundance that's there.

If there ever was a year I took on my Aspect and raised up my Attribute, it was 2017. My Aspect and Attribute? Love, of course. Everything that's passed has prepared us for what's here now, and what's here now is prologue to what's coming. It's both the simplest concept and one of the most profound I know, that thing your parents said. Life is what you make it.

I was here loving as Eva ONCE AGAIN rose, phoenix-like, from the ashes, this time the ashes of people's ill-considered opinions of her. Eva Breadner is a remarkable woman. Without peer, really. She has been knocked down so many times, by so many unexpected things, you think she was some kind of tubthumper. Her health has taken a few more hits -- that damned bariatric surgery keeps serving up surprises, not a one of them pleasant -- but she soldiers on. She loves and is loved. She's found a new passion. I'm excited for her and proud of her and more than a little in awe of her. 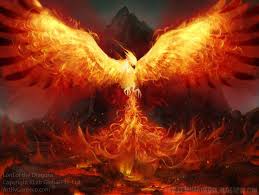 Mark has also had more than his share of health issues, but he too soldiers on, leaning when he needs to on us and on  our Dolly-puppy, who loves all of us very much. Dolly is vivacious and bouncy: we could have called her Slinky. 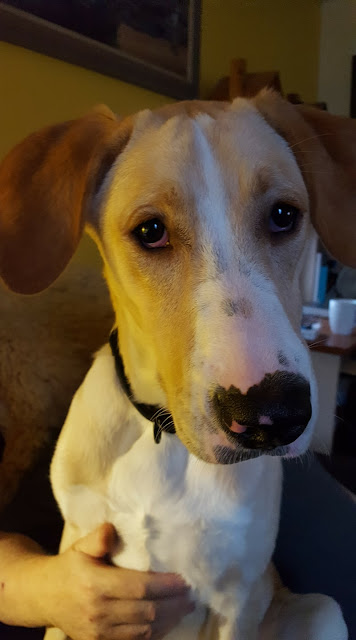 
She has a prehensile tail that doubles as a ninja's sword, an uncanny ability to defy gravity, and at 60 lbs give or take, she's convinced she's a lapdog.

We lost two pets this year, Tux and Mooch, seven months apart to the day. Both are dearly missed. Occasionally I call Dolly "Tux" and I catch myself wishing the Mooch-muffin could come around looking for cuddles the way he did umpteen times a day.

And Kathy. I was there, loving, as she went through a legal battle this past year. I provided tactical and emotional support; another friend of hers ran the legwork, but in the end it was Kathy who walked into the courtroom scared and emerged vindicated and triumphant. She, too, has overcome hurdles this year and I could not be more proud of her. She, too, is a strong woman, except she is just beginning to re-discover that. Hon: your 2018 is waiting for you. Make it YOURS. 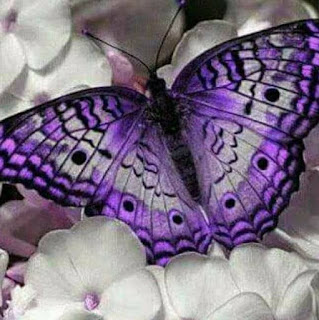 Other friends around me have lived their lives, their ups and downs, and I was there, loving, for all of them, just as I will be in 2018 and beyond. I'll spare you the tedious (to you) and very important (to me)  roll call this year. You know who you are, and I hope...I hope you know how important you are to me. And I wish each and every one of you health, happiness and love in 2018.

Song of the year came late this year. The beat hooked me, and the lyrics took on more and more significance as the last six weeks of the year unfolded.