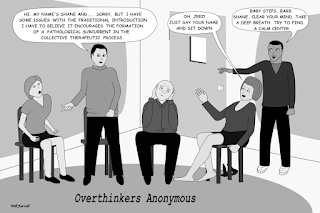 "Can I say just how nervous I am, here in this room with a group of strangers? I've never felt at ease in groups like this, because what are you all thinking about me?"
"We're not. Ken, we're not thinking of you at all. Oh, shit."
"Damn it, you mean you're not thinking about me AT ALL? I'M RIGHT HERE!"
"That's not what I meant, Ken, you know that. Calm down, deep breaths. You have our undivided attention in a non-threatening way. Why don't you tell us some of your background?"

Ugh, where do I begin. "I guess it started back in my pre-teens. I was a lonely kid, a bullied kid, a kid deeply uncomfortable in his own skin. It felt as if I was the only one of my kind on the planet. Other boys seemed to fit in so easily, and I -- round peg, square hole, you know? ''Take care of those you call your own, and keep good company'. Except I was my own company, and I wasn't very good for myself. At that age, the opinions of others form the basis of our own opinions about ourselves, and I internalized a lot of shitty opinions about myself. Worse, I couldn't understand them. Why did people hate me so much? I didn't mean anyone any threat. But the other kids my age were like aliens. Or maybe I was, it was easier to think that maybe I was the alien. I was in school to show off what I'd learned; they seem to be in school to show off. They were into violent movies, and later, violent videogames; I've always been into creation, not destruction. They got drunk and high to run away from their thoughts; I was always chasing mine.

"We were both into human women, but even there it was different. My whole goal was a full-fledged relationship (that, yes, included sex); their hole goal seemed to be sex. They were very successful in achieving their goals; me, not so much. I had the relationships--I've always had the relationships. But if I told you how many women said some variant of "I think of you like a brother", you probably wouldn't believe me. Don't get me wrong, that's a nice thing to hear if you're an only child, but at the time it just had me musing on incest taboos.

"So, yeah, I was turned inward very early on, and it was all to easy for me to imagine the worst, because the worst kept happening to me. And I found myself questioning....everything. Especially the good things, because I didn't deserve them. There had to be some ulterior motive. Or they were just softening me up for the inevitable bucket of pig's blood.

"This is, of course, a self-fulfilling prophecy, but I didn't see that then. Adults told me the secret of fitting in was to act as if I did. These were the same adults who told me I should stand up to my bullies (POW! right in the kisser!) or tattle on them (which just made them blame me for whatever punishment was meted out). "Act like you fit in?" HOW?  I don't act, first of all. If I'm acting, I'm pretending to be someone else. So it's not me, I'm not the one fitting in. Second, if there's anything worse than a spazz nerd faggot quad mongo asswipe, it's a spazz nerd faggot quad mongo asswipe who thinks he can pass for normal by wearing the cool kids' threads. They crucify you for that. Without wood or nails.

"It got to the point where I was overthinking everything. I'd map out every social encounter like a chess match, putting maximal effort into the script beforehand and obsessing about tiny deviations from it.  And now I'm overthinking about overthinking."

"Ken, you've been coming here for almost two years now. What first prompted you to come? And what have you learned?"

"I had a nasty bout with situational depression. Damn near overthought myself to death, actually. The love of my wife Eva, steadfast and solid and unwavering, pulled me out of it--that, and antidepressants. But of course I had to think about it, so that I could guard against it recurring.

"Then I met a bigger overthinker than I am. That always helps, you know. Kind of like a fitness buddy--we keep each other honest, or try to. But in her I recognized myself...not just jumping to conclusions but broad-jumping them entirely; continually making anthills into Alps; sometimes so convinced she hears what I don't say that an entire narrative comes into being out of thin air. Seeing that paralyzing her made me realize how much it paralyzes me. And when we both get overthinking something, the thoughts are reflex hammers pounding away on our knees and making us kick each other. Not pleasant. So I made -- am making -- an effort.

"What have I learned? A lot.

"I've learned that things are NEVER as bad as I think they are, or might be. Or as good, but we never seem to overthink about anything positive, do we?"

"I've learned to shut down the awful thoughts until I have more, most, all of the information. I still think them, but they don't...embed themselves.

"I've learned not to take everything so gods-damned personally. You were right, earlier. Most people aren't actually thinking about you, and if you can navigate the narrow channel between not caring what they do think and not caring that they don't,  you'll spare yourself a shipwreck or ten.

"I've always known that most people live up or down to the level of trust you place in them. Tell everyone that you KNOW they're stealing things and some of them will. Berate your partner daily for the fictional affair he's having and soon it won't be fictional at all. What coming here has taught me is something obvious that I didn't even consider: to include "myself" in "most people". If I trust myself, I'll go further than if I allow myself to be  besieged by self-doubt.

"The Wiccan Rede: 'An it harm none, do what ye will'. 'An' means 'if', and 'none' includes yourself. I don't consider myself Wiccan, but I know wisdom when I hear it and Wicca is replete with wisdom.

Overthinking is harmful. It harms your senses of perception and proportion, your sense of self-worth, your confidence, and a whole whack of other things. It also harms anyone that's in the thought.

"Maybe the biggest thing I've learned is that I don't have to stop overthinking: I only need to change its focus. I was always searching for the approval of others, and feeling crushed without it. But the approval of others is a fickle thing, and besides, what if there are no others? Ultimately, I'm the one who has to live with myself. So now I try very hard to seek only my own approval.

"That doesn't mean I disregard the opinions of friends, family, lovers and colleagues! It means that I listen carefully to their input and weigh it against who I am and what I stand for. Couple that with that Rede, above--or consider the first words of the Hippocratic Oath, primum no nocere..."first, do no harm"...and I like to think I have struck a suitable balance.

"Am I reflecting the highest version of myself with this action/thought?

"What would Love do now?

"Thank you for your time and attention."

Ha! I started saying years ago that my ship crashed here and I can't get home again. I am definitely an alien. (A friend, yes, someone I still like, said to me, after I mentioned being shipwrecked here, "Karen, you didn't get lost - you were exiled!)

I still overthink, but I refuse to be anonymous. :)

Ha, Karen, wherever you were exiled from, it was their loss and our gain. Thanks for imitating an earthling. And thanks for not being entirely successful at it. 8-)