Stepping Out of My Comfort Zone

So I did this: 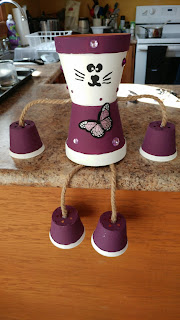 Not without help, I hasten to add. Eva helped me. I did all the painting myself save for a bit of touch-up...but the only reason that kitty-cat face came out looking at all recognizable was the stencil Eva cut out for me.
Even so, this was a real trial for me, for reasons that are very hard to explain.

I do not paint.

The list of things I do not do is entirely too long, and a distressingly large number of those things are either basic skills or defining characteristics of masculinity or some other like facets of being human that pull me up short. Is it any wonder I often feel inadequate put against strangers? So many things they take for granted are either exceedingly difficult or outright impossible for me.

Kathy posted a picture of some kitty cat terracotta pots a few weeks ago and enquired as to whether any of her friends were crafty enough to recreate them for her. I looked at the picture, noted painting was involved (may as well drop the 't' in 'painting') and wistfully said to myself "I wish I were". Kitty cat, KitKat, it looked like something I should do. If only I could do it.

Eva saw the post as well, and messaged me with it attached.

I can guide you through making one of those for Kathy love. So so easy and she would love it from you. A surprise for her?

I'd lie and say you get used to this utterly selfless side of Eva, but you never really do, or at least I haven't yet. Both people I have introduced to polyamory do it better than I do, but Eva does it utterly instinctively.

The saying goes that comfort zones are nice places, but nothing ever grows in one. Eva has routinely encouraged me to step out of my comfort zone -- without once ever nagging me to do so -- over the last nearly two decades. This, though...given the opportunity to do something I so emphatically don't do, I felt trepidation that sometimes crossed the border into terror.

STAYING WITHIN THE LINES

I have a lot of trouble painting or colouring within the lines. I always have had. I screw my face up so it resembles a squashed pumpkin, stare intently at whatever I'm trying to delineate, and resolutely fuck it up. Watch me try to write with anything that's not a pencil or pen and you won't be able to help but laugh at me: no matter whether it's chalk, a marker, or paint, I seem to be completely incapable of keeping my thickness of line consistent. ESPECIALLY if it's a thin line I'm going for. Blotch, blotch, belch, blecch.

What's interesting to me is that as a child, I couldn't paint within the lines, but I was sure eager to live within them. There was a right way and many wrong ways; the wrong ways  were always and forever wrong. I had what I always felt was a healthy respect for authority; it wasn't until my late teens that I began to intuit that authority often had no idea what it was talking about. Lines provided comforting boundaries: in here was safety and comfort and the known, out there was terra incognita, "Here Be Dragons", the scary unknown. There were categories, and it was important to know into which one I fell at all times.

Even when I was given free rein, and that was quite often by the standards of children today, so many of whom are incapable of walking to school, for heaven's sake...I was still made to feel like the world was an exquisitely dangerous place.  For such as me...absentminded, uncoordinated, street-stupid...it probably was. But here I am.

Present day Ken still much prefers the safe and secure, and likes to know how safe and secure he is, maybe to a fault. Thanks in no small part to Eva, whose childhood and upbringing were diametrically opposed to mine, though, my attitudes if not my actions have very much loosened.

Eva was made self-reliant. She seized all the freedom she was given and demanded more; as an adult, she has uprooted her life and career several times, always starting out at the bottom, always progressing rapidly up the ladder. "Comfort zone" to her is something akin to a "chaos" zone for me: she bores very easily, and prefers to be doing more than one thing at a time. She sees every side of an argument and can argue any side equally easily...several times I have been struck mute by her passionate defence of what I had hitherto thought indefensible, only to have her stop, look at me, and say, "oh, my god, you don't think I actually BELIEVE any of this shit, do you?"

Thus did I come to understand that black and white is most often an illusion: there are usually many, many shades of grey to any issue. I still have my prejudices; I'm human. The most rigid of those I'm only now getting around to deconstructing.  (Well, I was once racist and homophobic, so those are two prejudices I slew years ago.)

I said my attitudes have loosened. Many of my actions have not. Given a choice, I will still walk the known, comfortable path. Thank goodness Eva knows and understands this about me: she will nudge me, but nudging is all she does.

This: this was a nudge. And I thought to myself, well, Kathy has stepped out of her comfort zone for me, I should do the same--for myself, for Eva, and for Kathy.

Supplies were procured. It shames me to admit I didn't have a hand in this at all, because my bowels ran roughshod over me as I was entering the store, and I had to go find a place across the parking lot with a washroom, and by the time I got back, all was in the cart.

It wasn't until nearly a week later that I sat down to paint.

I really should listen to myself, you know. I'm forever telling people how important it is to breathe under stress. Which is interesting, because whenever I'm doing something that mixes discomfort and concentration...I forget to breathe at all.

I was fine painting the large pots...at least in the middle of them. No lines there, and the pot took the paint reasonably evenly. As I approached the purple/white border, my brush strokes got more and more tentative, my breathing more and more laboured, and my face more and more squinched. And then I'd have put purple where white was supposed to be or vice versa, and I would feel like smashing both the pot and my dense head.

The smaller pots were more difficult. They were plastic, not terracotta, and so the paint just sort of sat on them without soaking in. It took four coats to produce something reasonably even; until that fourth coat, I was convinced no amount of paint could ever coat the damned pot properly.

Then...the part I was dreading the most. The cat face.

Eva told me to paint a J, put a backwards J next to it, a couple of dots for eyes, and a comma over the back-to-back Js for a nose. Then to paint lines off to the side for whiskers. She instructed me to do this fifteen or twenty times on loose paper, of which we have about ten reams.

I did this over and over and the cat faces did not look any more like cat faces. They looked like abominations. They say practice makes perfect, and maybe that's true sometimes, but not this time. I YouTubed videos on how to paint thin lines, which was my biggest issue, and all of them called for glaze and wine and dilution and some semblance of artistic ability.

I CAN NOT PAINT, I said online, whereupon one friend leapt to my defence and reminded me of what I can do and another told me to "stop whining". (Thanks a lot, Sue, I love you too.)

Mark and Eva both saw my attempts. Mortification. Mark cleared his throat and gently intoned, "it needs work". The next day, Eva took it upon herself to cut out a cat face stencil. We taped it into place and that's how I was able to do something I could never have done otherwise. Even with the stencil, my face was squinched something fierce, because around me, Murphy is an optimist. Even things that can't go wrong, will.

"A surprise for her", Eva suggested, and of course I fell down there, too. I should have known better, but I was terrified she'd hate what I was doing, or if not hate it, at least not recognize it for the labour it was for me. She repeatedly assured me otherwise, and  sure enough, she loves it. Which makes me so, so happy...and also kind of proud. And so, so grateful for Eva's help. It's not often you find a wife willing to help her husband make a present for his other partner, but beyond that, I am ALWAYS grateful for Eva's gentle instruction. I may feel supremely stupid with things like this, but she manages never to make me feel any worse. That's quite the achievement. I love you, love. I will step out of every comfort zone I ever had if you're next to me.

And thank you, Kathy, for not dissolving into a puddle of chortle when you saw the finished gift. I know, I know, you would never do such a thing, but when someone's convinced he's shit at something...he expects shit to come of it. I love you, hon.