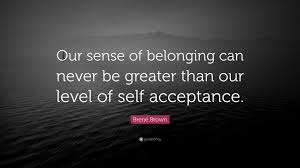 I always, always come out of the Sunday service at GRU feeling revitalized. Stronger. More in tune with myself, where I've come from, and where I'm going. Feeling more compassion for the world.  And often, inspired to write.

Today's service, "Braving the Wilderness of Belonging", was no different. In fact, it resonated particularly strongly for me. I'm going to be writing what will essentially be a very long, hopefully compelling Breadbin entry and presenting it in less than three months; taking and interpreting Rev. Jess's amazing sermons is good practice.

I've said more than once that for a long time I existed on the outside of every inside there ever was.  I longed to belong...but I felt that I couldn't, possibly, because belonging, to me, was a gift bestowed by others.

It has to be, doesn't it? The absence of it feels so much like a deliberate withholding, after all.

What I didn't realize back then was that image above. Our sense of belonging can never be greater than our level of self-acceptance.

I didn't accept myself for a long, long time. I took all my validation (or lack of it) from my parents, first, and then my peers. I never even thought to look for it within myself.

My parents did their best, all of them (biological and step)...and I'm not going to say their best wasn't enough, because it isn't a parent's job to validate their child.

That appears to contradict a whole lot of parental philosophy and practice. So let me add to it:

That is also a friend and partner's job, as I understand it and try to live it.

The first five years of my life...I was poisoned. Not intentionally; far from intentionally. But I lived in a house riven by hatred, and being a bystander to hatred has lasting, profound repercussions. When you're a child,  it's hard, often impossible, to distinguish what's happening around you from what's happening TO you. And a child's conception of fault is much more simple. If bad things are happening around (to) you...they must be your fault.

My parents, both of them, tried hard to dispel that with words. Their actions, focussed on each other, though, spoke a different language, a more direct, brutal one. I didn't speak that language. It was a dialect of dark energy, an idiom of intolerance,  and it was utterly incomprehensible to me. In other words, I didn't belong.

I went to school. For five years--junior kindergarten through grade three--I was surrounded by kids too young to have absorbed more than token resistance to The Other, and so I was mostly accepted. But longtime readers know what came next: I moved to London, got glasses, and from then on my external appearance more closely matched The Other that I was.

And I really was. I've always been hypersensitive. I'm an empath's empath. Energies that seem to be entirely or mostly unsensed by many can affect me to the point of physical illness. I feel rather than see large crowds, and the feeling is psychically akin to being buffeted by a gale at sea. I've never been able to hold back tears if I felt like crying, and I often did feel like crying. Violence utterly repulsed me. I was and am almost completely unaffected by physical appearances. It seemed as if nobody could understand me, let alone relate to me.

They put me in a gifted program for grades seven and eight, thinking I would find a home among kids whose gifts, as it turned out, ran much more towards the mathematical and scientific than the literary and emotional. And I'm here to tell you this: nobody shuns half as well as people who are shunned themselves. I didn't belong among the 'gifties' and I sure as hell didn't belong among the "(mun)danes", either.

Then I went to high school. Grade nine, Oakridge Secondary. For the first time in my life I experienced the kind of shaming that most terrified my mother: people actually asked me what my parents did for a living on my first day, and the answer clearly wasn't satisfactory. From then on, to all but the teachers, I was a non-entity. People would scatter to the four winds when I sat down for lunch. You get used to that kind of thing -- a human can get used to damn near anything, I've found -- but it's beastly hard to overcome the effect of such concentrated neglect.

I went to Westminster Secondary after that. My mom and stepdad  kept moving around, driven sometimes my economic necessity, sometimes by ambition, and sometimes seemingly by pure whim. At Westminster, I started the long, long process of coming into my own.
Westminster at the time was practically devoid of cliques. I was left alone, not out of malice but simply because everybody was left alone to be who they were.

I didn't know who I was.

I had some ideas, of course, but most of them were heavily inflected by the perceptions of bullies. Shedding those was gruelling work, but every tentative step seemed to gain me more and more of a semblance of acceptance. Leaving Westminster for Ingersoll District C.I. two years later was the most difficult move yet..and by the end of that single year at I.D.C.I, I didn't want to leave it, either.

I thought I had accepted myself then. I was wrong. Boy, was I wrong.

University. Wilfrid Laurier. Frosh week felt like the worst excesses of high school all over again, and after a single day of that, my room-mate Jason and I went off to make our own fun. Outside our room on Mac 2 West, though, I found myself emphatically NOT belonging once again. That was a rude, rude shock. I'd thought this acceptance and belonging thing was some kind of linear process. Not even close.

I still couldn't seem to make friends; the friends I did have had all selected me, by some process and for some reasons I was ignorant of. Alcohol didn't interest me, and most of my dorm-mates were majoring in Alcoholism, with a concentration in Projectile Vomiting. And soon, of course, I lost interest in the classroom altogether and got ensnared in the World Wide Web, where the illusion of belonging is particularly powerful, but where, in the end, you're alone looking at a screen.

I met Eva in 1999. She was a turning point for me. Here was a woman who accepted me as I was, validating me at every turn, but even more importantly gifted me with that safe, loving environment necessary for me to validate myself. For the first time in my life. 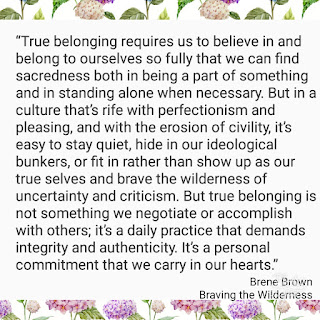 This is how Eva lives her life: a part and apart, knowing who she is and what she stands for, yet deeply respectful of who others are and what they stand for. Judgment doesn't often faze her; in fact, she really is the sort of woman who can be thrown to the wolves and come back leading the pack. She does not fit in; she's far too multifaceted to need to. And as was referenced in today's sermon, she will bend, she will be flexible, but she shall not be moved.

I owe this woman a debt I can never repay. She has given me not just permission to be myself, but the understanding that belonging was inside me all along.

More and more people have come along, people with whom I belong. because more and more I accept myself as I am. More and more I'm able to extend that gift of belonging. I can gift Kathy with what Eva first gave to me: unconditional love and acceptance, something I'm not sure she'd experienced in her adult life either. And in the manner of all things, you can't truly realize you have it except by experiencing yourself giving it.