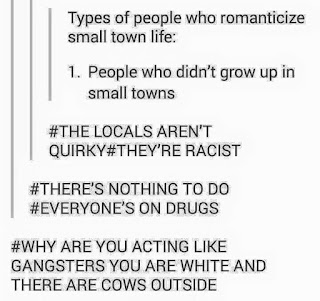 I saw this floating around Facebook and had to steal it. It's a perfect summary of how I feel...most of the time...about small towns.

Admittedly, I don't have much experience with them. I lived in Ingersoll, Ontario (population ~8000 at the time) between the end of grade 12 and the beginning of university. I'd better explain, for my younger readers, that this meant my OAC year ("grade 13") was spent at Ingersoll District Collegiate Institute.

I resented this particular move enormously. But that was my parents: always looking for a new place to live. And I get it: this Ingersoll house, what you'd euphemistically call a "handyman's special", they got for a song, considering that deep lot complete with barn. Out of all the houses I ever lived in, 180 Canterbury was possibly the nicest, once they were done with it. But that didn't do a whole lot to soften my attitude about Ingersoll.

The summer before that grade 13 year, I barely got off my own property. My stepdad was gutting and rebuilding that house from the inside out--he even moved the driveway by hand from one side to the other. When I wasn't helping with that, I was working at the Green Gables variety store/gas station two doors down, which my mother ran.

I do remember one trip 'downtown' soon after I arrived. I was excited to discover a musical instrument/sheet music store, then a little nonplussed to read its hours of operation, which were something like Tuesday to Friday, 11:00 am - 4:30 pm. It was also closed that week because the owners were on vacation.  Why even bother, I thought.

We lived right on the edge of town...that variety store two doors down was the first building you encountered coming off the 401 on highway 19. Our home backed on to a park, and beyond that was open field. The enchanting aroma of cowshit was a frequent visitor. I never quite grew to enjoy its company.

I must confess...I was predisposed to hate I.D.C.I. I had attended four different public schools (one of them twice) and two high schools before this one. I was coming here from Westminster S.S., in London, which was the first school I'd ever felt truly at home in. I had friends there. Actual friends. There was even some talk of my staying in London with one of them for the year, but that went nowhere. And so did I: Ingersoll.

High schools everywhere are like small towns. High schools in small towns are a caricature. By some weird relativistic magic, people know all the gossip before it actually happens. There was simply no way to mind your own business, because your business was actually everybody else's business, and  so you'd store up gossip of your own in self defence. It didn't hurt that the Green Gables variety store I worked at rented VHS tapes, some of the "boom-chicka-wow-wow" variety, and so I knew the identities of the people who rented On Golden Blonde over and over. This is currency, in high school.

Nobody was more surprised than I when I started making friends at I.D.C.I. I'd thought "friends" were a Westminster thing. But no, some of the best friendships of my life came out of that nowhere place that at some point stopped being nowhere and became "now, here".

Not everyone in town was racist, although racism certainly did exist. Homophobia was a bigger issue--one of those friends had to get out before he could come out. Not everybody did drugs, although they were definitely an issue...even more of an issue if you counted sex as a drug. The petty crime, though, that was off the charts. It never got out to the edge of town where I lived, but it was a constant in certain neighbourhoods, one of them just across the street from that high school.

There was the town bum I met on a nighttime stroll in the park behind my house with my friend Kieron. The man was a typical specimen of hobo non sapiens. Indeterminate age, somewhere between 30 and 400, with hair that could and probably did conceal all manner of wildlife alive and dead and a reek you could discern from six hundred paces. He was clearly mentally ill: he said things, over and over, sometimes a whisper and sometimes a scream, things that by turns amused, fascinated and repelled me. "A philosophy of turd-herds". "Fuck a duck for a buck for luck." "Big shit daddy and his asshole, too." That last one was almost sung. All three became catchphrases for a while between Kieron and I.

Mental illness and deinstitutionalization are big city things, not small town things. I'm sure there are dozens of turd-herd philosophers shambling around London, which has gone downhill with a vengeance since I left it in 1989. There are easily a thousand such people in Toronto. And as for crime, well, London is a cesspool now and Toronto's homicide rate is higher than New York's. So it is not just unfair but completely boneheaded for me to associate small towns with crime and craziness.

There are, however, two related things about small towns that I simply can not stand. One is unique to small towns; two is pretty much unique to me.

One is that there really is nothing to do. I like living in a city where I can go to the symphony, or an OHL hockey game, or a rock concert if I choose. A place where the library has more than seventeen books in it and you can shop for just about anything without having to mount an expedition. Oh, and not to put too fine a point on it: I need a job. Cities have jobs. Small towns, by and large, don't. Cities also have transit. In the winter, at least, I need that, too.

Two is the entrancing, positively intoxicating odour of other people's business in small towns. It must be utterly delightful, since so many people can't help but get their noses right up in it.

This is going to sound awful.

My attitude towards people I don't know is very much big city. While I of course understand that you, stranger, are a person with agendas, priorities, a rich inner life, yada yada yada...unless I know you, my mind insists on treating you as a passerby. I'm not sure how many times it would take for you to pass me by before I notice you've passed by me more than once, but I know you wouldn't believe how high that number is. You are simply Not My Business, and I'd really prefer it if I was extended the same courtesy.

This didn't preclude me from giving a high level--a nationally recognized level--of customer service. But while customers literally Were My Business...they were only my business insofar as they could affect my business. Their personal details didn't enter into the transaction, and when they did I'd wipe them clean with the closing of the door.

This is the precise opposite of the small town default, in which every person, especially every new person, is a potential source of reams of information that can be spread all over town.

Many people in my family are from small towns, or have small town mindsets. My mom was one of them...she could tell you all sorts of things about the families and lives of her customers, things I considered very personal. These were not her friends, these were people she was friendly to.  It used to drive me batshit crazy. Why do you know that? Why do you think I need to know that? Which in turn would drive her batshit crazy. Because I care about people? Because you should, too?

I do recognize that once again, I'm the weird one here, and that this closed-offedness could be construed as a social handicap. Every friend was once a stranger, after all. Making friends is still a fraught process for me, in part because I'm not at all forward about it. Once those first steps are made, though, I'm an open book and I'll absorb anything you care to tell me. And I care--that's not something that anyone else has ever faulted me on, unless it's for caring too much.

Now let's throw in a couple of general practitioners...a paradox, in other words.

I don't do well in crowds of people, such as you find in big cities. I feel buffeted by the energies of everyone around me.

I'm sure I've told the story of going to meet my friend Jason for lunch in downtown Toronto. He worked in one of those high-powered office buildings with thousands of other suited and tied men, all of whom seemed to be spilling out like pillow stuffing. You've heard the saying, "you could cut the air with a knife?" Not this air. For this air, you needed a machete, or maybe a chainsaw.  There wasn't much chatter, but the mental chatter was overwhelming. No, I can't read minds...but in this case, in this place, I didn't have to. The dominant feeling was one of  extreme urgency. The inside of my skin tingled. Not pleasantly.

Now I live here near the edge of Waterloo, a happy medium of a city. It's really three cities...take the signs down and people from away would never be able to tell you where Waterloo ends and Kitchener begins, while Kitchener is flowing into Cambridge. Together, those three cities hold near half a million people. But you'd never know that surveying my neighbourhood. I can walk to open farmland in ten minutes. A small town in the big city. It works. For now.

I'm not sure what the distant future holds. I know that I need to be around people, or I sink into depression....but not too many people, or I slip into anxiety. I have trouble imagining a future in which retirement is even an option (Freedom 95, anyone?) I'm hoping the self-driving vehicles have well and truly taken hold by the time I reach the theoretical retirement age in some twenty years, because that would give me the freedom the rest of you driving people have taken for granted all your adult lives. In the meantime, I have to be where the jobs are, and so here I am.