Eva's team at her work were rewarded for their efforts during a recent hairy period with tickets to an executive box at Scotiabank Arena to see the Toronto Raptors vs. the Oklahoma City Thunder. We went last night.  It was...an adventure.

She picked me up at work at 4:30 and we hit traffic hell before we even got out of our own city. Google estimated 1:51 travel time. Tipoff was at 7:30. Four hours should have been more than sufficient.

We were past Guelph before we hit 70 km/hr, and then we were in Mississauga and slowing down again. The 427 ramp to the Gardiner was a total shitshow; we were caught in that for almost an hour. Sheer volume. Eventually we made it downtown and things got worse. Much worse.

I'm getting over a cold, which in Ken-speak means I'm perfectly healthy except for a nasty persistent cough that will last a week or two yet. I've been thoroughly watering that cough. That water, coupled with the Timmies I'd had to keep me awake, began to press on my bladder most insistently before we'd even hit the city proper. By the time we were approaching downtown, I was in acute pain.

Eva had reserved a parking spot steps from the arena through the Parking Panda app. The address we were given, which Google confirmed, was 55 Bremner Blvd.

"Bremner" is now a swear word in the Breadner household.

First Google told us to turn right onto Bremner, and 55 Bremner was 50 meters away. "You have arrived at your destination," it said...but no. That address turns out to be for Maple Leaf Square condos. There is no parking lot there.

Don't believe me? Here's the Google Street View for 55 Bremner Blvd -- which Google insists is a parking lot. Do you see a parking lot? I don't. I didn't. Neither did my bladder, which by this point was making me actually cry.

Eva booted me out of the car at Union Station. "Go piss, I'll circle!" she called, and I thought I'm never going to see her again, she'll be swallowed up in this insane traffic,  STOP THINKING AND START URINATING ALREADY.

The trip to the bathroom was an adventure all in itself, and when I finally got there, I almost collapsed from the pain I was feeling...and then pissed for seven and a half eternities. Retracing my steps, I emerged on to the street and began looking for Eva. It was at least five minutes before she found me, coming from the opposite direction. By this time we were late, and we had given up trying to find this mythical parking lot. There's a parking lot at 65 Bremner...but it was called "York Street Parking" and it wasn't the lot we wanted. We parked there anyway...for another $35.

Seventy bucks to park and we've missed the first quarter and part of the second. Emails will be exchanged with Parking Panda in an effort to get our money back.

We found our way to the box, and things improved.

I've had the privilege of box seats here for a Leafs game many years back. Here's what they look like:

It's an experience. They ply you with delicious food, your view of the game is unrivalled, and you have that self-satisfied feeling of having paid $0 for a $250 seat.

When we arrived, there were ten minutes left in the 2nd quarter, and the Raptors were up 31-24.

Eva had never seen a basketball game, live or otherwise. Basketball isn't my sport, but I have watched a few Raptors games and I halfheartedly follow them. We still weren't going to turn this down.
The Raptors had defeated OKC in their previous game in their barn. Home and home series are hard to sweep in any sport, and I expected defeat tonight. Indeed, they lost 116-109. But the game was riveting. Very different from hockey.
For one thing, it's considerably louder. Leafs fans are largely priced out of their home arena, which is largely populated by stiffs in suits who don't even pay attention to the game in front of them. Raptors games are a different beast.
For another, the game itself is almost secondary to the fluff. Dancers gyrate on the court during time-outs. Big dice roll down the stands, parachutes bearing T-shirts are dispatched hither and yon, and the music, if you can it that, doesn't stop when the game starts.

"We the North" is the Raptors' slogan, and the grammar purist in me has to point out that's a sentence fragment. We the North what? We ARE the North? Is that what they're trying to communicate? The Celtics are just as far north and Portland and Seattle are considerably further north and this is the kind of thing my mind seizes on and won't let go of.

Still not a fan of basketball. I equate it to what hockey would be if the hockey nets were two feet wider and a foot taller. There's very little drama in a game when virtually every play is a goal. Each game is either a blowout, or there's no point watching until the final minute, which takes half an hour to unfold.
But I can sure appreciate the athleticism. Several times last night I saw human bodies do things I didn't think they could do. Eva spent a good deal of the game appreciating this dude: 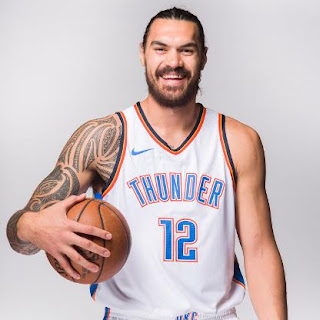 The angle of his dangle is all wrong for me, but hey, whatever slams your dunk.

Pizza and popcorn and pretzels and nachos and sushi and luscious desserts and free booze. Well, free to us. I'm sure it all went on a tab. I can't imagine what that tab looks like.

That's another thing that was running through my head: the money this place must generate. Last year the Raptors sold (all figures USD) $74 million in tickets (and the Leafs sold $91 million). Total revenue for the Raptors was a staggering $271 million last season. Extrapolate that across the NBA, add in the NHL and MLB, and you're looking at many, many billions of dollars. Professional sports are a boon to a city's economy and all, but think what that money could if it were put to actual use.

Getting out of downtown was almost as difficult as getting into it, and we found ourselves either on or crossing Bremner Blvd more than we wanted to. The cops were out in force directing people, and specifically directing US away from the route back to the Gardiner Expressway.

At least I no longer had an ocean of piss inside me.

We made it home at the stroke of midnight. Seven and a half hours gone, and we were in the arena for all of 105 minutes.
We had a good time there, to be sure. I'd change virtually everything else should we go again, but we had a very good time. And even thought the Raptors lost, they looked good and should contend this year.

Thank you, love, for the adventure.