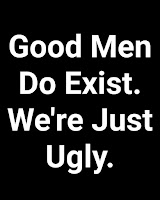 What do you think when you see things like this?

A friend of mine -- which, by definition, means a profoundly un-ugly person -- shared this last week as a joke. Predictably, it rubbed me the wrong way. Because it's the kind of thing I would have posted a few years back...and only meant as a joke on top.

Then there's the words "good men", which sound a hell of a lot like "nice guys".  In fact, change it into "Nice guys exist, we're just ugly" and you have what sounds for all the world like an incel's unmating call.

Some of the most beautiful women I have ever known are thoroughly convinced they are ugly. We're talking women who make me weak in the knees here, and they believe they're ugly.

Maybe, just maybe, the same might be true of many men?

We men aren't often complimented on our physical appearance. Because of this, it's all too easy for some of us to fall into the same sorts of body image traps that bedevil so many women.

That's not to in any way equate the ridiculous standards men set for women. Male makeup is barely a thing; nobody so much as bats an eyelash at a 230 lb chunky guy, while a 230 lb woman is almost universally ridiculed (grrr). Some women go for guys in suits, some for guys in uniforms, and some for guys in grubbies. Men, generally, only have three points of body image contention, and all three are pretty stupid when you get right down to it:


Which is true, but by no means ironclad. There are many men of short stature who have become powerful ("Napoleon complex" is a thing), and there are nowhere near as many women who insist on tall men as there are men who insist on thin women, for example.
Then there's this:

"You don't even know if our species are sexually compatible."
"The hell I don't. I can see fingers and a tongue from here; anything else is gravy."
--Spider Robinson, Callahan's Legacy

If you can't cut the mustard, you can at least lick the jar.
--Ibid.

There are, of course, a host of other areas men can and do concern themselves with, beyond basic hygiene, which is anyone's entitlement and obligaation.  But that list pales in comparison to the list of things women inspect, tweeze, brush, scrub, exfoliate, condition, oil, de-oil, and sauté every day to keep their physical appearance tip-top. 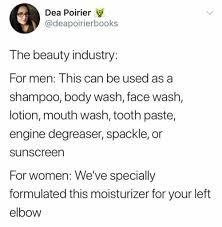 It takes more than three words worth of effort to write those three words, and staring at them there makes me feel a little uncomfortable. Ooooh, you cocky bastard.  Get a load of this guy, he thinks he's a Chippendale dancer. Or, even worse: Hahaha, you keep on being so charmingly deluded. Is that what you think? Hahahaha.

I'll easily concede my name is not Hercules Adonis. (I'm stronger than I look...but smell isn't everything.) I'm congenitally inflexible,  with piss-poor eyesight, and I tend to get caught up on those things. Physically, I've been told multiple times that I have piercing and deep eyes, and a "nice ass", whatever that is. (Never understood the appeal of that part of the anatomy: that's the part the waste tumbles out of, you know?)  Spectrum, spectrum, just because I'm not Jason Momoa doesn't make me a swamp monster. (Does Jason Momoa have a nice ass? I'm ignorant on these matters.)

But(t) more importantly, like anyone else I live and die by my thoughts, beliefs, and behaviours, and they're what make me attractive, or not.What's less attractive? Self-pity or cockiness? Where is that cheerful woman who speaks to the spirits? Can I get a happy medium up in this place?

There are other people who feel as I do, that ugliness has very little if anything to do with one's surface appearance. Those people are my tribe.

My friend notwithstanding, people who post things like "Good Men Exist, We're Just Ugly" are usually pity-fishing. (Relax, Glitch...I know you weren't.) But it's true. I know this because I've posted stuff like this and basked in all the ego stroking that followed.

And you know? Pity-fishing is okay once in a while. We live in an ugly world...it's hard not to go through it without feeling ugly yourself now and then. But when you need the validation of others to feel good about yourself, (a) it's fleeting and (b) you've got a real problem.

You'll never hear me announce I'm a good man. The general consensus is that I am one, although I can name several people who will tell you in no uncertain terms that I am a slice of prime, Grade-A asshole. I think that's true of most of us: unless you're the late Fred Rogers, you're probably a villain in somebody's story. It doesn't stop me from occasionally doing stupid things. (I can hear Eva right now: occasionally?) It doesn't stop me from sometimes hurting people I care about, although damnit I try so hard not to do that. Sometimes trying so hard is what does it...ever walk around on eggshells, scared of offending someone, only to have them super-offended at how you're walking on eggshells?)

I've been trying, I'm not lying
No one's perfect, I've got baggage

Life's too short, babe
Time is flyin'
I'm looking for baggage that goes with mine