The Paradox of Tolerance

Less well known is the paradox of tolerance: Unlimited tolerance must lead to the disappearance of tolerance. If we extend unlimited tolerance even to those who are intolerant, if we are not prepared to defend a tolerant society against the onslaught of the intolerant, then the tolerant will be destroyed, and tolerance with them. — In this formulation, I do not imply, for instance, that we should always suppress the utterance of intolerant philosophies; as long as we can counter them by rational argument and keep them in check by public opinion, suppression would certainly be unwise. But we should claim the right to suppress them if necessary even by force; for it may easily turn out that they are not prepared to meet us on the level of rational argument, but begin by denouncing all argument; they may forbid their followers to listen to rational argument, because it is deceptive, and teach them to answer arguments by the use of their fists or pistols. We should therefore claim, in the name of tolerance, the right not to tolerate the intolerant. We should claim that any movement preaching intolerance places itself outside the law, and we should consider incitement to intolerance and persecution as criminal, in the same way as we should consider incitement to murder, or to kidnapping, or to the revival of the slave trade, as criminal.”
--Karl Popper, "The Open Society And Its Enemies", 1945

Somebody has finally supplied the missing piece in my ever-evolving philosophy of free speech. Seventy four years ago.

My side of the political spectrum considers the other side rabidly intolerant. After all, on that side they've got all the white supremacists; all the people who want to deny basic human rights to LGBT folks; all the people who seem to have forgotten that freedom of religion also means freedom from it.

Meanwhile, people over there think people like me are EXTREMELY intolerant. "Diversity of everything except thought", goes the sneering put-down. After all, on this side, we routinely shut down what we consider to be "hate speech". Hate speech, say the righties, is anything a properly woke individual disagrees with. We seem to have a particular animus against Christianity.And we really do tend to ascribe to sexism and racism attitudes that can easily be explained with something less hateful.

I have wavered back and forth over the years between believing we should just carte blanche let people say whatever the hell they want, and believing there should be some fairly strict limits on what can be said.

Right near the beginning of Stephen King's IT, a gay man shows his partner a disturbing graffito carved into the Kissing Bridge in Derry, Maine ca. 1985. 'STICK NAILS IN THE EYES OF ALL FAGOTS (FOR GOD!)

I saw that identical graffito in London, Ontario, that same year. Painted on a cement retaining wall. I was pretty homophobic myself at that point in my life -- I didn't think I knew any "fagots" (I did) -- and even so I didn't think they should be dead. Just, you know, not having all that evil butt-sex out where I could see it. The fact that, at 14, I'd yet to see anyone having any kind of sex at all was of course irrelevant.

I am no longer homophobic in the slightest. It's really hard to keep up the gay-hatred when you discover just how many loved ones in your world are gay. I've also come to believe that statements like 'STICK NAILS IN THE EYES OF ALL FAGOTS", with or without (FOR GOD)!, are criminal statements. Hate speech, in other words. Why do I think that? Because, while I don't recall any psychos going around asking if people were gay and pulling out hammer and nails if so...I have absolutely no doubt such people exist. And it doesn't take overmuch to normalize behaviour you wouldn't want normalized.

Hate crimes in both the United States and Canada are trending upward, led by that old standby, anti-Semitism. (Just when does it stop being Jews' turn in the hot seat, anyway?)  Hate crimes were up 17% in 2017 in the U.S. and a whopping 37% in Canada. There are 1,020 distinct "hate groups" in the U.S., and at least 130 here. Why is this happening?

It's the culture, silly.

We have a President of the United States who, let's never forget, has said this: 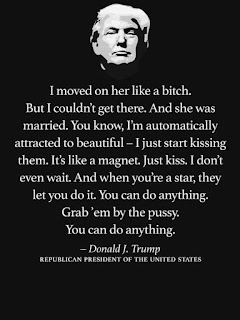 More than twenty credible allegations of sexual assault. To say nothing of his many other hatreds. He's been an inveterate and unrepentant racist his whole life long. He's ableist. He's of course transphobic. Really, anyone who isn't a rich straight white cis-male is on Trump's (s)hit list. This is pure, unadulterated hatred, given voice by the most powerful man in the land, emboldening so many others to hateful speech...and action.

I have always said that putting undue restrictions on hate speech doesn't eliminate hate speech: in a weird way it actually encourages it. People don't like being told what they can and cannot think and express, as it turns out.  At the same time, though, when hate starts getting normalized, we've gone too far the other way.

My side is, of course, not blameless. There are plenty of Christians on the Left -- which shouldn't be surprising, since Jesus Christ  was no conservative -- but it doesn't stop the Left from relentlessly mocking and denigrating Christianity. Not to the level of killing Christians, no, but certainly to the level of making them feel put-upon. (When your Saviour is quite literally a martyr, perhaps that's not as difficult as it maybe should be). Be that as it may....

There are your hardcore atheists who make fun of even the most mild expression of spirituality. I have no time for them, any more than I do for the most fundycostal uber-Christian heaven-bent on saving my soul. At the same time--again--it always seems to be the Christians being awfully selective with their Scripture, zeroing in with laserlike precision on the perils of the evil butt-sex while cheerfully ignoring literally every other Levitical prohibition. That's not faith, that's curated bigotry. (Oh, were you going to remind me about Paul? Paul, that guy who never even met Jesus except in a dream, and for whom the faith is not named? Show me what Jesus said about gay people. I'll wait.

Still waiting. Could be here a while.

And the latest touchstone in the culture wars, transgenderism? Well, the opposition from that usually stems right from Genesis 1:27:
So God created man in his own image, in the image of God created he him; male and female created he them. (KJV)

(Remember the next time you think your body is ugly, you're critiquing the image and likeness of God. People have been thrown in hell for less).

It gets worse: you've got so-called Christians who positively venerate a man who breaks every last one of the Ten Commandments daily, usually before lunch. Ask them to reconcile that and what you'll hear is that Trump is upholding American values, protecting America's borders, and rooting the baby-killers out of the Supreme Court. Trump is proof, as far as these people are concerned, that God can use evil men for great things.

You can't argue with people that far gone. American values?  Like, say, "grab 'em by the pussy"? Or protecting the borders of a nation of immigrants from....more immigrants? And about those baby-killers...

It's almost like these anti-abortion activists don't actually live on this overcrowded, badly suffering planet. Because you NEVER see them pushing contraceptives. EVER.Why is that? I believe with all my heart it's because these people actually don't give a shit about abortion: what really pisses them off is women having sex without being punished for it. Have you noticed how many of these people are men?

To call yourself Christian while steadfastly ignoring just about everything Jesus ever stood for doesn't just invite mockery and ridicule: it mandates mockery and ridicule. To do so while also denying basic human rights makes you dangerous. To then claim, as so many do, that they're "loving the sinner but hating the sin" cuts zero ice when the "sin" is the equivalent of having green eyes or red hair.

All that said...there are many Christians, perhaps even a majority of them, doing their best to live life as their Lord commanded. Lumping all Christians in with the haters is not productive. Christianity, stripped to its essence, commands you to love your neighbour...and your enemy. This is not a radical teaching, even though the reason it isn't radical (you and your neighbour are one; so are you and your enemy; so are you and everything that is)...sounds plenty radical. Except virtually every religion has said the same thing: we're all one. Science is not too far off proving it, either.

It's not a paradox to be tolerant of intolerance. It's a necessity.