How I am Keeping Sane

...or at least not going any further insane. 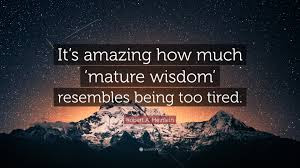 1) News, limiting of:  As much as I'd like to step away from it, it's a little too newsworthy right now. I'm hoping after the 20th things will finally calm down and here in Canada we'll go back to pretending Trudeau is worse than Trump. But sorry not sorry: until then I feel a pressing need to be on high alert.

I've largely filtered out C-19. Amazing what you get used to. I keep butting up against a wisdom-nugget I claimed to adopt decades ago, but which time and circumstance prove I have trouble with:

That sounds blasé applied to something as large as covid-19.  It isn't. I'm being as prudent as I know how to be. I haven't left this property in more than a week and when I do I am masked and distanced. We are instacarting and curbside pickupping. We have no social contact whatsoever with anyone -- trying not to complain, since we're all in this boat, but yeah, the seas are a bit rough. All I can do is keep pressing on and hope we'll get to hug each other once this is over. (Gonna be a pretty big baby boom forty weeks after whenever that will be.)

There's no point worrying about anyone I love getting the virus until they get the virus. There's no point in worrying about my getting it until I get it. All I can be is prudently cautious and hope my friends are doing so as well. Actually, the mess in the United States has helped to give my free-floating anxiety something concrete to focus on. Which really helps. Lacking focus, that anxiety diffuses until it permeates everything.

2) Reading. I made a Facebook post just before the new year about the book I picked up called CHILDREN OF TIME. I am 400 pages in, still really loving it.   This is a Big Question book and a marvel of worldbuilding. After WATERSHIP DOWN got me loving rabbits, I shouldn't be so surprised something could get me to love spiders...It's nice to step away from a screen. I doubt I'll ever get back to the heights of reading I used to scale regularly -- I used to average almost two novels a week -- but I'll settle for having an alternate stream of information forcing the stretching of my attention span. I started this book great gangbusters, 250 pages in two days, and since then I've been sipping at it, savouring it, wanting it not to end. When it does, I'll pick up something else new. God knows I have dozens of books crying to be read without even having to buy more. 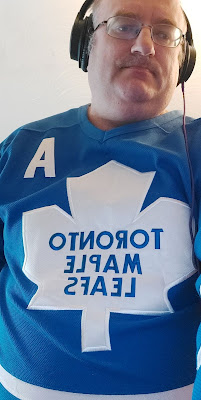 Just look at that gut.

Music and hockey. The NHL starts tonight. I came down this morning and Eva snickered at me. Can't think why, I've been doing this in honour of the Leafs' first game of the season every year as long as we have been together. You're sick of me saying this is their year, but....this is their year. To at least get past the first damn round of the playoffs. On paper and discarding my fandom, they are the clear-cut best team in this newfangled all-Canadian North Division. Moving west to east, Vancouver lost some punch since last year; Calgary is roughly the same (pretty good, not great); Edmonton's defence is still, somehow, beyond poor and they have a hole-y goalie; Winnipeg also has blueline issues, albeit a scary forward corps and one of the best tenders in the game; Ottawa has vastly improved over last season and will be a team to be reckoned with very shortly, but not quite; Montreal has also improved in some places but Carey, you're a mean old Daddy but I like you you're over the hill and picking up speed.

And Toronto? There are always questions...but not as many as usual this year. Anderson doesn't have to play lights out with Campbell having clearly shown he can play too; the defence is much-bolstered and there's an element of toughness between Bogosian, Simmonds and even Thornton that was sorely lacking on previous iterations of the team.  The forward corps is one of the deepest in the league and the power play should score almost at will. Of course, the virus could sweep through half the team and this is the Leafs we're talking about, so I'm going to hold off on a firm Cup prediction. But I like the chances. It won't be this in reach again.

4) Music. I am nibbling at the edges of the last great world of music I have yet to explore: jazz. This is thanks to Rick Beato, a YouTube celebrity: music producer, professor, songwriter and multi-instrumentalist, he has forgotten more about music than I will ever learn, and he has such a personable, relatable way of narrating his videos. He has a series of 99 "What Makes This Song Great?" vids in which he deep-dives into a piece, isolating various instruments, explaining the theory and production that went into the song, and just driving up music appreciation. Rick produced metal, but jazz was his first love, and he offered me a gateway through an artist I already knew and loved: Joni Mitchell.

Joni teamed up with some of the jazz greats of her time, most notably Jaco Pastorius (bass) and Pat Metheny (guitar). Armed with Rick's recs, I jumped into both artists' discogs and branched out from there. My current favourites are the Jonathan Kreisberg Group (the linked song, 'The South Of Everywhere" has been played at least twice a day here for two weeks now)  and Lars Danielsson ("Lviv" here)  I'm finding that jazz, like classical, functions perfectly well as inoffensive background, yet repays, in some cases nearly endlessly, close attention. Much of jazz is simultaneously relaxing and energizing. I'm not a fan of free jazz: I can appreciate the talent, but I lack the sophistication to appreciate what that talent produces.  But these smooth guitar/sax/trumpet grooves -- put one in an odd time signature and add a unique hook and I'm sold.

Shoutout to the reactors who have given me joy over the last six months or so:

Jayvee TV -- here, he reacts to the Pentatonix cover of Cohen's iconic 'Hallelujah'

Dicon Dissectional Reactions -- here, Daniel is reacting to Simon and Garfunkel's 'Bridge Over Troubled Water'. Daniel is a real inspiration to me: his mature and insightful deconstructions of classic pieces will impress you.  Daniel is partial to 70s prog rock but he likes almost everything he hears, same as Jovaughn on Jayvee TV and same as

Jamel_AKA_Jamal -- here reacting to, of all things, Cab Calloway and the Nicholas Brothers (and if you have no idea who they are, please, please, check it out -- it features perhaps the most astonishing tap dancing you'll ever see and it will paste a smile on your phiz.

These reactors -- I never imagined they would enrich my life. Hearing music I know and love through new ears actually strengthens me.

I am adjusting. As I think I mentioned somewhere, we're expected to average six minutes a task. Yesterday, I averaged 4:12. Now, I won't get another day like yesterday, perhaps ever: there were hundreds of lost tickets wrongfully assigned to one of the logistics facilities, mostly address change requests (it is insane how many people don't bother to review their shipping addresses when placing an online order!). Obviously those tickets are all moot now -- the items delivered to their original addresses. So all I had to do was close them out. Of the 90 tasks I completed yesterday, a good 60 simply involved closing the ticket. Takes all of 90 seconds.

I'm finding it's the Tier 1 stuff giving me grief. Simple things like creating a credit, or a free of charge goodwill gesture...because in tier 2 those are all merely PARTS of assigned tasks, I haven't had the opportunity to really memorize the steps of each. In my coaching session yesterday, I announced my intention to rewrite and simplify the relevant PRs (procedural documents) and impressed the hell out of my supervisor. I keep doing that without meaning to. I mean, if you have a weakness, you address it, right? Apparently many don't. Anyway.

It's not a perfect job but it's not a bad one either. It's safe and can be performed without a mask. There is zero supervision -- exactly three tasks are evaluated each week. Again, I did 90 yesterday alone. I miss my friends, hell, I miss my freakin' enemies at this point. But I'm lucky, and I keep reminding myself of that.

Stay safe, everyone. Love to all.