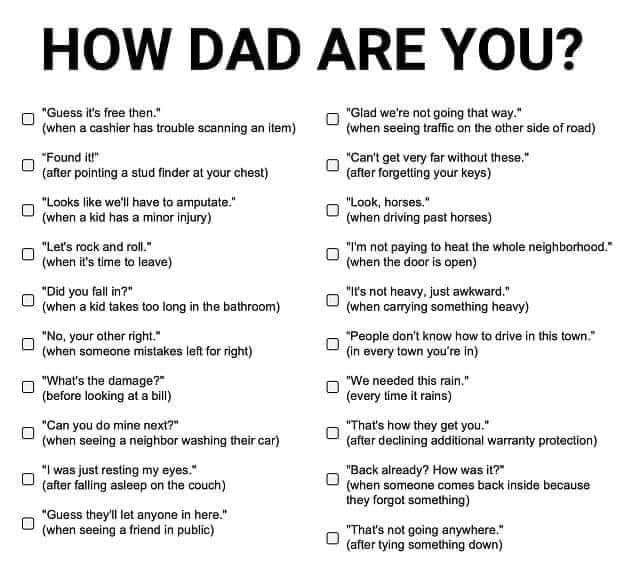 People tell me I should have been a father. Likely because of the jokes. I have an inexhaustible collection of Dad jokes. I keep them..in a dada-base.

I'm looking at a collection of them now: I'm supposed to tick off each one I've used. These are interesting.

"Guess it's free then!" (when a cashier has trouble scanning an item)

Have I said this? Never

Why I never say this: I worked retail, that's why. This "joke" is so stale it's dusty. And each and every person who says it thinks they're being original. Related: "say one for me!" when I'm down on my knees stocking; I used to answer this one of two ways, depending on my snark level. I'd either cheerily sing out "One!" Or I'd politely enquire to which deity they wished their petition to be voiced, in exactly those words. Either way, it'd throw people off, which would restore a little of the power imbalance. (Stockers in grocery stores are store directory monkeys and convenient goats to be scaped when the goat's anus tatrare you drove here all the way from Neptune to procure is out of stock. We did that on purpose, see. Just to inconvenience you personally.

"Found one!" (after pointing a stud finder at my chest)

Have I said this? Nope

Never held a stud finder, and I can't even say I'm a stud as a joke, because I'm so obviously not one that the laughter would burn like acid.

"Looks like we'll have to amputate!" (when a kid has a minor injury)

Would I say this? You bet. But I'd go further. I'd bring the scraped kid over to the table and pull a saw out of my toolbox. Or a hacksaw.

"Let's rock and roll" (when it's time to leave)

Have I said this? Yes, although I prefer my dad's "off like a herd of turtles", or occasionally, "off like one of those Jewish things". (It was years before I ever learned what those "Jewish things" were.) Eva's maiden name is Hopf, with the p barely voiced: her dad used to say "we're Hopf and running".)

"Did you fall in?" (when a kid takes too long in the bathroom)

I would say this. Or I would slide a pencil under the door and say "the constipated mathematician works it out with a pencil!"

"No, your other right!" (when someone confuses left and right)

Have I said this? Often. To myself, even.  Embarrassing. I couldn't reliably tell my left from my right until I was seven or eight, up in Parry Sound playing road hockey with my cousin Terri. I played net. The ball was made out of India rubber. I took a shot off my knee without flinching too much, followed by shots off my head and groin and who knows where else...went into aunt Dawna's house and I swear I was feeling no pain...pulled up my pants leg for some reason and beheld the horror that was my left knee. There was a GOUGE. Also, suddenly, from nowhere, a great deal of pain. Aunt Dawna Mercurochromed and bandaged me up and it was forever after drilled into my knee: the left one is the one that hurt.

"What's the damage?" (before looking at a bill)

Have I said this? I don't think so. I mean, this is the sort of thing you say when YOU'LL be paying the bill, after all, and I wouldn't want to insinuate to the people whose meal I'm buying that it's "damaging" me. You can call this selective literalism all you want, but I maintain that words have power, and how we phrase things matters.

"Can you do mine next?" (when you see a neighbour washing their car)

Have I said this? Nope, not least because I don't have a car, I never see anyone washing their cars, and if I did I would never dream of saying this out loud out of fear they'd imagine I was serious. Jokes fall flat if you must immediately say "Joking!"

"I was just resting my eyes". (After falling asleep on the couch)

Have I said this? No, but I probably would if I fell asleep on couches. I don't even sit on the couch here: my chair is this computer chair.

"Guess they'll let anyone in here" (seeing a friend in public)

Would I say this? No, and I hope you wouldn't either. This is CRUEL.

See, these last two trigger me for different reasons. "Guess they'll let anyone in here" is exactly the kind of "joke" bullies tell (and then when you take offence, they say "it's just a joke, lighten up!) "Glad we're not going that way", to me, is an observation anyone would make and utterly devoid of humour.

"Can't get very far without those" (forgetting your keys)

Yes, I have said this to others. Not applicable for me: I can go just as far with keys as without them. The difference for me is, I can't stop and lock my bike up without keys.

"Look, horses" (when driving past horses)

Naw, that's another factual observation. Now, if we're going past a CEMETERY, I will inform you people are dying to get in there.

"I'm not paying to heat the whole neighbourhood!"

Would I say this? You bet your ass. Did I hear it? Never, but I did have a real problem leaving lights on.

"It's not heavy, just awkward" (another observation that anyone can make and has made, I can't think what's "dad" about this.

"That's how they get you" (after declining additional warranty protection): Of course I've said this. It's true.

"Back already? How was it?" (when someone comes back in after forgetting something)

Yes, I've said this. Also "welcome home, I missed you so much!")

And finally, "that's not going anywhere" after tying something down or otherwise securing it: I believe this phrase must be uttered by law.

I've got the dad jokes well in hand, but what kind of father would I have been? I freely admit I would have struggled with any child too young for language. I would have instilled a respect for natural consequence, and let those play out as often as possible. If Eva and I had had kids, she would have toughened up my soft side and I have have softened her rough edges. But we'd never have allowed our kids to play us off each other.

Our kids would have been raised firm but fair. Rigid boundaries, enclosing as much free space as we could. I think the biggest thing I'd do is try my damnedest to find out what my kid was interested in, and culture those interests. It's up to each person to chart their own course and discover their purpose...But I have yet to find the second thing which makes the first more challenging than it should. Hard to get very far when you don't even know what direction to go.