I can usually tell you where my eccentricities come from. My absent-mindedness is genetic: my dad, in a major hurry to get to a fire (he's a volunteer fire captain) backed through his garage door, among many other inadvertent misadventures. My risk aversion and its geneses are well documented. My patience, which has been called superhuman, came from my stepdad. My ideas on love, as odd as they seem, are borne of life experience mixed with logic and empathy.

I have no idea where my hatred of all things (and people) fake originated. I've spent some time examining this recently as I realized this antipathy is a roadblock to mental peace that I need to work past: also, just how irrationally huge it is.

I posted this picture around a week ago. 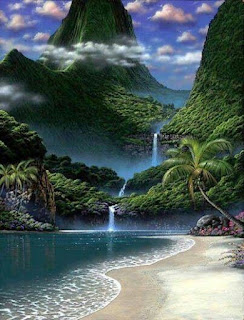 I found it on Facebook, it originally came from Pinterest, and it was labelled "Waterfall Beach, Albany, Western Australia." I Googled to confirm there was such a place (there is), but I didn't look any closer at the picture. I simply posted it. I'm trying to shift the focus of my Facebook wall from politics and current events back to the silly puns, philosophical articles of interest, and stunning pictures of this planet we all share.
Then I found  this wasn't real. Now that I look at it a little closer, no kidding. It's too perfect.
I felt betrayed. I was actually angry. This doesn't have the same impact as being taken in by scams like QAnon, homeopathy and religion, but it's the same principle. I was duped, and I unthinkingly duped others by spreading the lie.
I immediately deleted the picture and posted an apology. My old boss, a man I respect and admire, suggested that if it brought positive reactions, where's the harm? A colleague said it made a gorgeous screensaver. That's as may be: my beef is that it purported to be a picture of a place anyone could go visit...and if anyone went to visit that place, they would quickly found out it isn't.
I got into a hullabaloo on the Waterfalls of Ontario group  over something even more picayune. Many of the pictures there look like this: 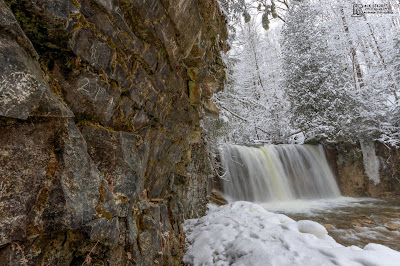 I asked what phenomenon caused that weird blurring effect. I mean, I've been to that place. Here's my pic, taken from the top of that bank: 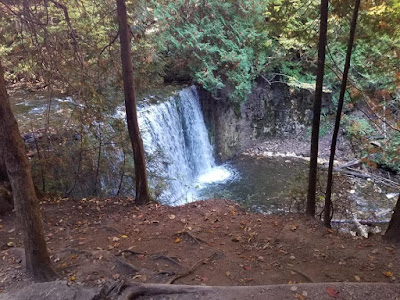 THAT'S Hogg's Falls near Flesherton, and you can go there and stand in that spot and that is what you'll see. I said in the waterfall group that the pictures are lovely -- I repeated that several times -- but, I asked, why doctor them? To what end? I was informed that the blurry streaks are not "doctored", that in fact a "longer exposure" is the standard way to photograph a waterfall, but I kept butting up against the fact that THE WATERFALL SIMPLY DOES NOT LOOK LIKE THAT. To me, painting is where you have free license to screw around. Photographs are supposed to be real. That's why "photographic evidence" holds up in court.
So then earlier today I found an incredible shot of what just had to be the most intense storm ever captured on film. Canberra, Australia, and this one won an international photo contest: 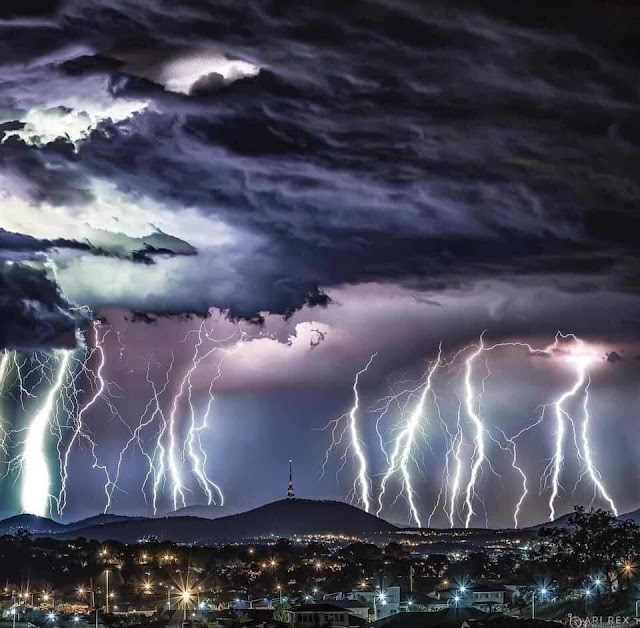 You can imagine my chagrin when Eva looked at it and instantly said "you know that's taken over a period of time, right?"
Fuck. Except, again, this won a photo contest. So even though it's not a real photograph, I seem to be the only who who cares...or even notices.
It's not just waterfalls. The Pyramids at Giza are probably the most famous example of fake photos. For decades, photographers scrubbed urban Cairo out. If you go visit today, you may be disconcerted to find the Golden Arches virtually in the shadow of the Sphinx.
For me, of course, it's not just photographs. I detest makeup, because I feel it's a colossal waste of money and energy and, again speaking only for myself, it actually detracts from the wearer's appearance nine times out of ten. I know so many physically lovely women who suffer hives at the mere thought of anyone seeing them as they actually are. I find that almost unbearably sad. I despise auto-tune, programmed beats, and anything else supposedly added to music to 'perfect' it. No small talk for me, because it's basically a collection of trivial meaningless lies. "How are you?" There's only one acceptable answer to that question, and most people won't hear any other. I have been conducting a social experiment to prove this for thirty years.
Next time somebody asks how you are, answer "really shitty!" in the most cheerful voice you can call forth. Seven out of ten people won't notice what you said; it's a fair bet the other three are either already your friends, or could be. Likewise the equivalent closer: "we really need to get together".
I don't say this anymore. To anyone. Ever. Because not once has anybody who has ever said it to me subsequently brought it up, and if I do, awkwardness ensues in a hurry. Oh, that? You didn't think I meant that, did you? Why would I ever ACTUALLY want to see the likes of you? I just said that so you'd fuck off. Now, fuck off.
Which brings me to fake people, and closer to the cause of this rigidity within myself.
My mom.
She wasn't fake. She put a high premium on honesty and she cared deeply for people and animals -- and she made sure they knew it. But she was also bipolar.
Her depressive phases never seemed depressive to me. Instead, she was irritable in the extreme, hot tempered and prone to sudden outbursts. My childhood homes were dotted with landmines, many of them concealed in tall grass. On numerous occasions I can vividly recall her screaming at me -- the phone rings -- and she would instantly adopt an everything-is-fine-what-could-possibly-be-wrong tone that REALLY FUCKING GRATED on me. Then she'd hang up the phone and without even taking a breath, launch back into the screamy harangue.
But that was nothing to her in a manic state. At times like that, she'd be rabidly, cloyingly cheerful. About everything, including things nobody in their right mind would be happy about.  When I first came to Kitchener, the woman who was the morning DJ on CHYM reminded me of Mom. MILITANT cheer, you vill be happy and you vill LIKE it!
That shrieked fake to me...and I was often proven right when her reality would shift in an instant and she'd either be "normal" or irritable and primed to explode.
My mother was obsessed with appearances, as I believe I have mentioned. My soul was in immortal danger if I ever displayed poverty to anyone outside our household. I didn't see the shame in being poor, myself: lots of people are, through no fault of their own. Contrary to American orthodoxy, poverty is not a moral flaw. But: don't bring bread crusts to school, ever (I got spanked for that); if you must visit a flea market, so called (I imagined) because all the goods therein are verminous, make sure you do it far away from home so that nobody you know will see you; above all, keep yourself to yourself so that people don't inquire too deeply into who you are and what nothing you come from!
I don't blame Mom. At all. She didn't ask for the myriad of things that afflicted her, and she did express remorse for the worst of her actions. I loved the woman; I hated the malevolent caul that cloaked and choked her. But I think that caul was what caused me to detest fakery in all its forms.
I was once a compulsive liar. I turned that around when I finally understood, far too late, that no amount of lying could cover the truth and that all I was doing was driving people away from me. I don't lie anymore.
That would be fake.