We lit out just after 9:00 a.m. on Wednesday. I had barely slept not just Tuesday night, but Monday night as well: excitement. This trip has been on the docket for months. I thought Road Trek day would never arrive.

Kathy and Ken roadtrips are special for many reasons. One of them is our shared love of backroads. No 401 for us. Yes, it can add to the time on the road. (Can: doesn't always. Get caught in a jam in Mississauga and the timelines can even out in a hurry, sometimes even tilting in favour of the scenic route.)  But it hugely detracts from the stress. As a perpetual passenger, minimizing driver stress is of paramount importance to me.

So we took our time, meandering northeast, Gertie the Google GPS lady taking care not to route us on freeways. Roads and specifically alternate routes get scarcer and scarcer the further north you go, and so it was we found ourselves approaching highway 11, maybe a bit more than half an hour south of Bracebridge...and Gertie told us we still had an hour and a half of driving to do! Screw it, on to the highway we went.

Highway 11 is unique in Ontario. It's kind of a three-quarters-assed freeway. The speed limit is the standard 100 km/h (62 mph).  There are two lanes each way, and they are divided...almost, but not quite, completely so. But there are no cloverleafs. That means there are cross streets. Most of them only intersect with one side of the highway, such that you have to go south to the next turnaround to come back north, or vice versa. A few of them actually cross the whole highway...which means you have to jackrabbit across northbound lanes, come to a stop in the median, and then floor it to go south. Sport Mode got a workout. 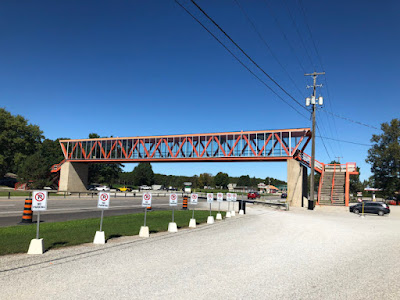 For some reason I thought this place was well south of us but (whoop) there it is! Weber's is an Ontario institution. I've only been here a couple of times (and tried to get Eva here:  in the days before Google, we drove three hours out of our way only to find it had closed for the season the day before.

It opens at 10:30 a.m. and there's a line to buy burgers right at open. They're thinner than they used to be, but still delicious.

I was pleasantly surprised to see a highway to Haliburton direct off Highway 11. That's an area Kathy and I have talked about exploring, but I thought you pretty much had to go through Toronto to get there, and who wants to start their vacation with that? This offers an alternative -- again, it'll take longer, but time we've got.  (Ken, stop thinking about future trips and enjoy this one!) (I am!)

We arrived at the Wellington Inn several hours before check-in, but they let us into our room anyway. Accommodation for this trip was planned carefully to minimize two things: expense, and possible exposure to bedbugs, cockroaches, and the like. No frills, but clean and somewhat comfortable was the idea. With the exception of the cement mattress, the Wellington Inn fit the bill. The room was a notch bigger than a standard hotel room, with lots of space to move around. This next sentence is kind of a kick in the teeth, but true: $120/night represents a pretty good value nowadays. Especially in Muskoka in the summer.

For those of my readers who do not live in Ontario (and hell, for those who do)...you need to see this area. The tourism slogan is "once discovered, never forgotten" and that's not hyperbole. This is Canadian (or Precambrian) Shield territory: the oldest rock on the planet. Glaciers shaped this land coming and going, and today it's a vast territory (covering half of Canada!) stocked to overflowing with rocks, trees and lakes.

It's waterfalls that have drawn us to Bracebridge, a place Kathy has been to but I have only passed through. First up: Bracebridge Falls, right downtown. 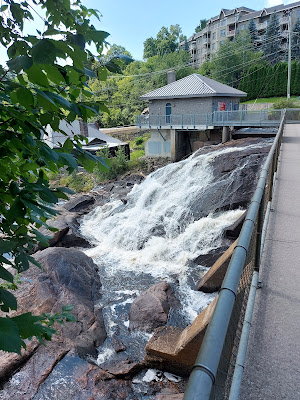 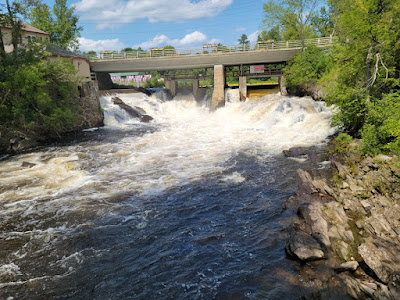 Then to High Falls, which is taller than this picture makes it look: 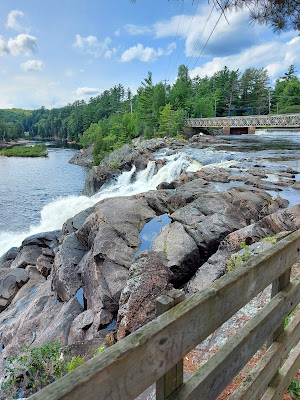 We can just watch and listen to these all day. They're somehow both peaceful and powerful.

Waterfalls of Ontario lists Wilson's Falls as "moderate difficulty" to access. From prior experience we know that this is an understatement: "moderate", at least in the case of Mystery Falls, means very steep, muddy slopes; wildly uneven terrain, and a much longer walking time than they estimate, at least for the likes of us. Wilson's was therefore on the "maybe" list, and when we got there and found a sign warning access was "DIFFICULT" (no "moderate" here!), "maybe" became "nope". Luckily, Potts and  Port Sydney Falls were not far away: 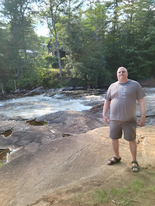 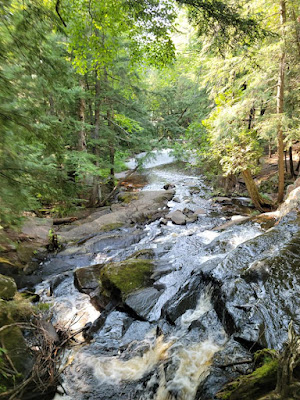 Dinner was Kathy's awesome chicken Caesar wraps, which were supposed to be a concession to the budget but of course were so much more than that. Yummy. We capped it off with ice cream from Momma Bear's. We have a new favourite ice cream flavour: Kawartha Dairy Black Raspberry Thunder. Both of us have since procured a tub of the stuff, that's how good it is.
DAY TWO: Bracebridge - Parry Sound
Morning saw the first real blemish on the trip, one that would sadly repeat. We picked our accommodation, as I said above, knowing it would be a place to rest our heads and little else. $120/night gets you that, but don't expect a mattress you can sleep (well) on. Firm, unyielding and lumpy...I've slept on worse beds (and would the following night), but it's been a while since I had to pay to do it.
So we were up earlier than we might otherwise have been. The Bracebridge highlight of the day was a cruise upon the Wenonah II. It was just a short hour long jaunt out into Lake Muskoka, but we got a nice running commentary on the area from an opinionated ship's officer whose opinions we  largely agreed with. Cottages on this lake start at four million dollars and work their way up from there. Just in case you have some pocket change laying around.
A few pics of the Wenonah II and Lake Muskoka: 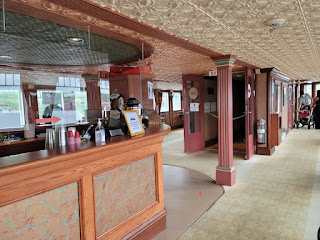 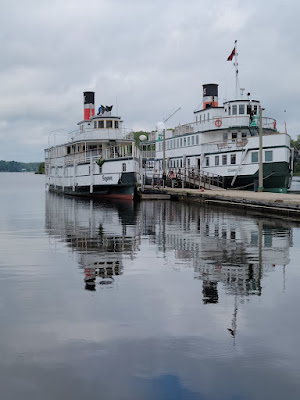 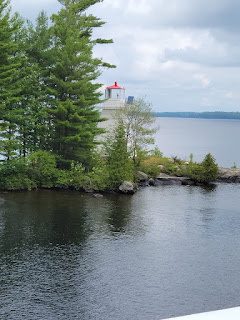 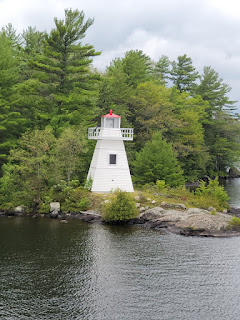 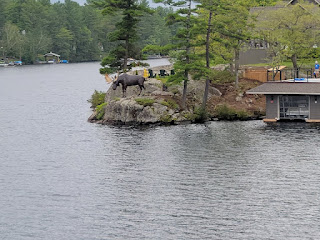 Once we were back in port, we moseyed our way to Parry Sound. I was excited to show Kathy this town, which is near and dear to my heart.
Kathy's only been here once before, 23 years ago when she was pregnant with Jade. I haven't been in town in a few years myself. Some beloved places have been covidnineteened out of existence, like the Bay Street Cafe and Wellington's Pub. A chain has moved into the former's location and a former neighbour of my father's bought the latter and turned it into Di Salvo's Bella Cucina. Dad and Heather have made reservations for us: this is Kathy's first time meeting my stepmom.
This cucina is bella, indeed. The place looks more like an office than a fine dining establishment, and this was its third night of operation, but the food, the food!
This crab cake (Facebook link) is made with real crab, served on a bed of risotto Milanese, arugula, brunoise of red peppers, Hollandaise sauce and lemon. I don't even know what a "brunoise" is. It was the first crab cake I'd ever eaten and Kathy reports it was far and away the best crab cake she's ever tasted. Absolutely exquisite, followed up by prime rib almost as good. Dad and Heather would not let me pay. That's not why dinner went so well. Heather and Kathy got to observe Ken Breadner père et fils and make fun of us both. Great food, great conversation, all in all a Very Memorable Meal. I'll be back to this restaurant in the future.
My dad gifted me with a clock...not just any clock, but a clock he bought in an antique shop in 1966....the clock that was sitting on our living room console TV when I came home from the hospital after being born: 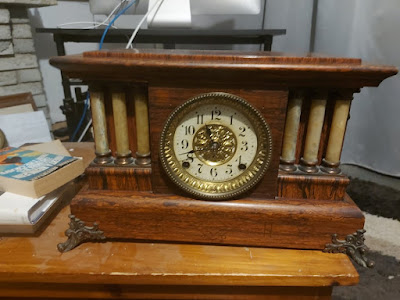 Then back to the Sunrise Inn, formerly the Travellers' Motor Inn, which I would recommend to single travellers in the off season but not to couples or families. $120 a night, again -- at least during the week. In Parry Sound in high summer, that is an indisputable bargain, and the rooms are very clean...and very, very cramped. The mattress was even worse than the Wellington Inn's and we both woke up with aching backs. We had looked at booking a second night here but I am so glad we didn't, not least because the Friday night price of the room was $70 higher. I'm sorry, I know prices are rising. I also know that it costs no more than $50 to turn a room and anything above that is pure profit to the hotel. $190 for a room that's about 9' by 14'? It might be market value, but it's still highway robbery.
Two days down, two more to go. Blogging days three and four tomorrow.
on August 01, 2021