Welcome to The Proofing Drawer

Welcome to The Proofing Drawer.

This is the next iteration of The Breadbin, a blog I began in May of 2004. Rather than start an entirely new blog, I've decided that I would keep The Breadbin as a site name for simplicity and continuity.

I won't disown anything I've written. But I can do better. Have done better, actually, before I allowed the pandemic and assorted other stressors to dictate my immediate response to all manner of provocation--not just provocation, either. This morning one of my Facebook friends posted that she sat down at her work computer in her home office, logged in, checked her breaks for today and discovered she "had a stat holiday". I stared at that in disbelief and steadily mounting irritation that has never been far away over the past two years. It's New Year's Day, how the HELL did you not know it was a holiday? How is that even POSSIBLE? WHY WOULD YOU ADMIT THAT PUBLICLY?

I didn't say anything, but I for damn sure thought it. And then a much louder thought-voice intruded and said

ken why do you care

...and I sat there confused for another minute, my totally righteous and completely inappropriate anger falling apart.  Yeah, Ken, why do you care? There's obviously a lot you don't know here. Maybe this person had been told they were going to work today. Some workplaces can force you to work stat holidays if they fall on part of your workweek. I'm sure if you thought about this a little longer, calmly, rationally, like a sane individual, you'd come up with many other possible reasons why someone might not know they had a day off today. But you didn't stop to think of even one. Instead you got all upset...over what, exactly?  How is this in any way important? To anyone, least of all you? Is this going to matter in five years? Of course not, it doesn't concern you at all NOW and you'll have forgotten it completely in five days. Be happy for her, she got a day off she wasn't expecting.

Have I told you I often forget to breathe? I do, especially under physical strain. But I mean it more here in a metaphorical sense. Where I could take ten or twenty seconds before responding -- by which time I will probably decide the correct course of action is to stay silent -- instead I blurt out, internally or even externally, a thought that does NOTHING constructive.

This is not new. But it's gotten stronger rather than weaker over the past, oh, about four years. Why? Fear, of course.

I will respectfully maintain that if you can look out at the world right now and not be afraid...well, the charitable explanation is that you're privy to information I don't have.  The voice of 2020 would phrase it this way: ARE YOU FUCKING BLIND YOU DIMWITTED TWAT?!?!?

There is a time and a place and especially a manner in which it is appropriate to express fear. Lashing out at people who are just as, or more, afraid than you are is definitely not the time, place, or manner.

There are millions of people who appear to be not just ignorant of the pickle we're in, but who seem to relish pickles and who are in fact cultivating entire cucumber gardens to pickle. I used to think I could reach these people. I'm no longer sure they have any interest in being reached.

You know what? It doesn't matter. Because the only way to effectively fight such people is to build your own community dedicated to the opposite ideals theirs has. I KNOW this: I've written it several times before. It is oh so easy to get caught up in the dramas -- and all that does is give them the attention they crave.

There is a part of me that will forever be in grade school, trying to figure out the best way to deal with the latest bully in what seemed like an endless string of them. Adults are full of suggestions on this topic. Ignore him. That doesn't work: he just does something worse and worse until you're bleeding, with yet another pair of glasses shattered (I'm sure my parents loved the sudden $800 bill that recurred four or five times over the space of seven years). Get an authority figure. Sure, okay, and the bully might even be punished, but that will just make him meaner and he'll be waiting for me after school. Maybe he'll get lucky and kill me.

Fight back. Yeah, right. I'll get pummelled, either right away or later on when he recruits ten friends.

If there's another option, I didn't know it then and don't know it now. No, wait, there is one more alternative. Stay away from the watering holes where the lions congregate. Put more bluntly, that means making a serious effort not to go looking for fights -- and since that's not possible online where you post cat pictures and somebody says what a pussy "Justine" "Turdo" is --  when I do find myself in a fight, I can choose to respond kindly and with compassion.

Can I? Yes, I can. If I keep in front of me at all times the very simple equation, so simple it really ought to be common sense: if you add hate to hate, you get more hate. I mean, that's kinda obvious, no?

I had a long talk with a family member back before Christmas. He is a self described "proud asshole" and he'd kill me if I outed him here with what I'm about to say.

He's gruff, he's tough, he's every inch a redneck -- and he's also fiercely intelligent,  a phenomenal teacher, and NOT a shallow thinker at all. So he'll come out with some opinion -- and boy does he have them -- that sounds problematic, even outright offensive, and if you (deep breath) don't react to that and actually ask him to explain himself, he's likely to surprise you with his reasoning. It turns out that at root, many of those opinions aren't half as offensive as they come out -- or at least shouldn't be. Could he clean himself up? Sure, and maybe he should. But could I in turn not hold so tight to my own orthodoxy and realize that we're actually not far apart at all? To maybe find out that he really just feels people are so focused on divisions that they've forgotten they'll all human beings, and that he calls that out viciously because he finds it offensive? Yeah, I can. I did.

I used to do this a lot more easily and often. No excuses, nothing that can be construed as a defence of the indefensible. I found I could still do it on that family visit, I found that (of course) it turned what could have been an ugly confrontation into a fruitful meeting of the minds, and you know what? There's too much ugliness in the world just now to go trying to add to it.

A colleague said something to me the other day that I need to crochet into a sampler and pin up on the wall in front of me. "I find assuming best intent is good for my mental health".

I asked people to do that with me, because my intent is nearly always good even though I butcher the delivery sometimes. The least I can do is the same in return. Sometimes I can't see where the good intent might be coming from, and in those cases I can politely ask. If it turns out the intent is bad, well, there's another meme for that. (There's a meme for everything): 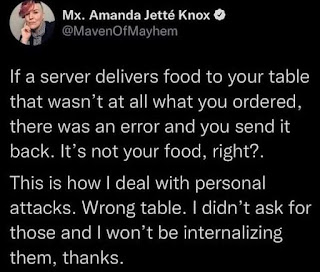 I can likewise do a lot more to ensure I'm not delivering the liver and onions to the prime rib table. Or vice versa.  (Liver and onions, blecccccchhhhh.)

Little reminders of what business calls "best practice" are everywhere. I post them all the time. But somehow they go whoooosh when someone tells me my mother should have swallowed me, that I'm just a piece of fecal dandruff,  that I'm a stupid liberal, above all that I'm not sincere.

Well, here's the thing. Online bullies are different from real world ones. In the real world, you have to get past them to be home safe. Online, all you have to do is change sites. Or turn the computer off. The people who call me a stupid liberal don't know who I am and also don't know what the word 'liberal' even means, so their taunt is semantically null. And as for sincerity, well, that's in woefully short supply from so many quarters nowadays that it's probably easier for some to assume it's not there. I don't know any of these people. I don't need to care what they think of me. I certainly don't need to defend my words with more words. Actions do that so much better.

This blog is going to be about the lessons I have learned and am learning, among other things. I can't promise fake positivity because I'm not a fake person, and I believe the darkness needs to be confronted. But it can be only be done with light.

Thank you for reading, and welcome.