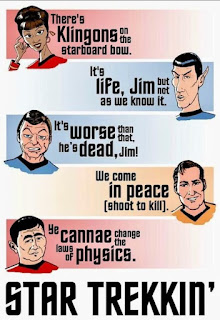 That's from a 1987 novelty song by The Firm. It's our unoffical road trekkin' anthem.

It's been a long and dark winter.

The forecast for this past weekend spun like a roulette wheel. Rain, sun, rain, snow, rain..SUN!

Gas prices being what they are, "left-right tours" are not advisable. So the idea was to pick somewhere with a lot of sights in proximity. Niagara is always at the top of that list...except we're two of the few people who recognize and care that covid didn't just get up and flounce out the door. A large number of people who feel otherwise swarmed over Niagara yesterday, so we didn't/

Instead we drove to Hamilton. "The Hammer"'s official nickname is "The Ambitious City" (and it is that: real estate there is actually more expensive than in Toronto as of this writing. It's also known as the Pittsburgh of Canada, and has deep working class roots. But the nickname that has drawn us today: The City of Waterfalls.

It comes by that nickname honestly. Hamilton has over 100 waterfalls within city limits, with many more in the immediate surrounding area. Most are tiny cataracts, but there are several seriously impressive cascades.

First up: Tiffany Falls.  21m (68 ft) tall. This is a short and easy hike (10 minutes or so and suitable for people of all ages) over some bridges criss-crossing a stream: 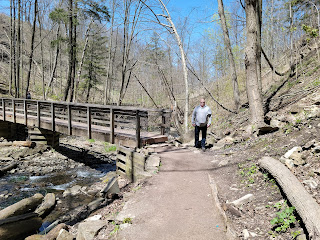 before you walk around a corner and behold this: 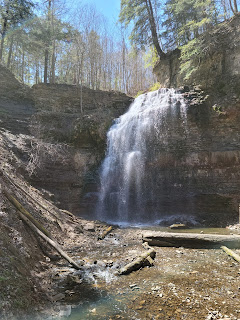 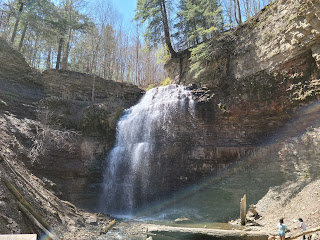 Without a drone, it's hard to do justice to this place. The valley you're in feels considerably deeper than it is. These falls apparently roar in early Spring. What we saw was a hypnotic mix of power and delicacy. 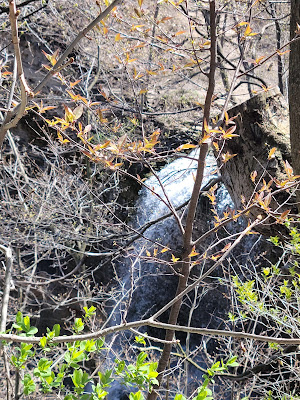 The foliage mostly obscured this one, which is a pity as it's actually a meter taller than Tiffany. The flow was weaker, too. On the plus side, this one is free to access (and even easier than Tiffany).: 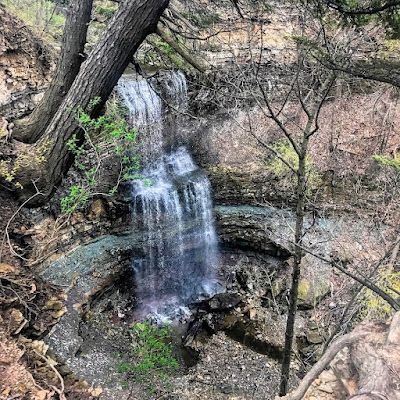 The rock formations here are part of the Niagara Escarpment, which runs from western New York State to near Chicago. In southern Ontario it's responsible for some stunning outcrops, not to mention all those waterfalls. It's the Niagara Escarpment visible on highway 26 from Owen Sound to Meaford, and Manitoulin Island is considered part of the Escarpment as well.
Onwards and upwards...to the Devil's Punchbowl and lookout. This was $11.50 for parking -- and again, money well spent. There is an extensive trail network all through this area, including the Bruce Trail, which runs 885 km from here to Tobermory. You can see the Toronto skyline from this lookout: 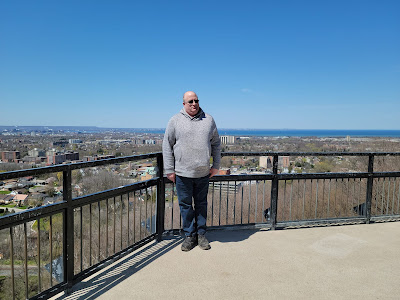 ...and of course not in this picture. I had a hell of a time with my phone/camera on this trip. Somehow I had set it to take videos instead of pictures, and added a timer to boot, and when I went to take the pictures the glare from the sun was such that I just aimed in the general direction of what I wanted to capture and...thought...I hit the shoot button. Most of the time I didn't, so my pictures were nonexistent or herky jerky video clips that last four seconds and finish in my pocket. This was discovered after Felker's and grrrrrr. 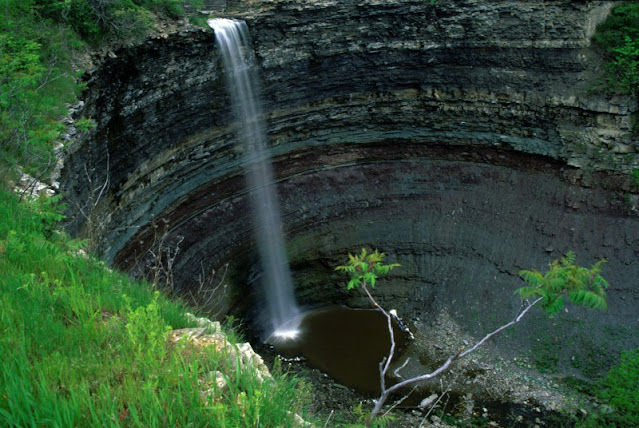 This is not my shot, or Kathy's. I stole it from the Tourism Hamilton website. That's not because Kathy's photo was bad, at all, but because it included a totally incongruous road that is about half a millimeter above the top of this pic.  It's maybe a silly thing to care about, but if I'm taking nature shots, I don't want the trappings of humanity visible in them if I can help it. This can lead to some awkward contortions, and I know it's not true to life, but damnit my species is nothing but a giant blight on this earth. I love individual persons, and lots of them, but people deserve the coming cull, as far as I'm concerned, and most of our works will eventually erode back into the earth whence they came and where, to be perfectly frank, most of them belong.  No great loss.
That was something we marvelled at, actually: Hamilton really is "the city of waterfalls" in that there is city right on top of some of these places. You have to envy some of these properties that back on to unspoiled beauty like this.
Next up: Albion Falls. 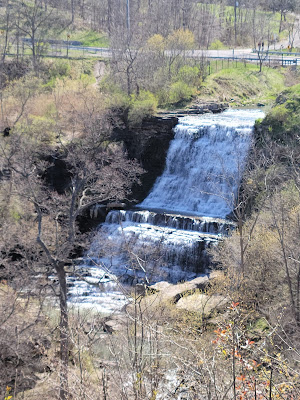 I love how delicate this looks. Very pretty. Up close, photo by Mark Harris: 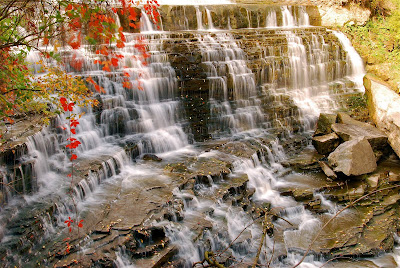 Our final waterfall of the day, Tew's Falls, is the tallest cascade in Hamilton, just a little shorter than Niagara Falls. This one hurt: $15.50 to park. Rather steep (though not as steep as the waterfall.) 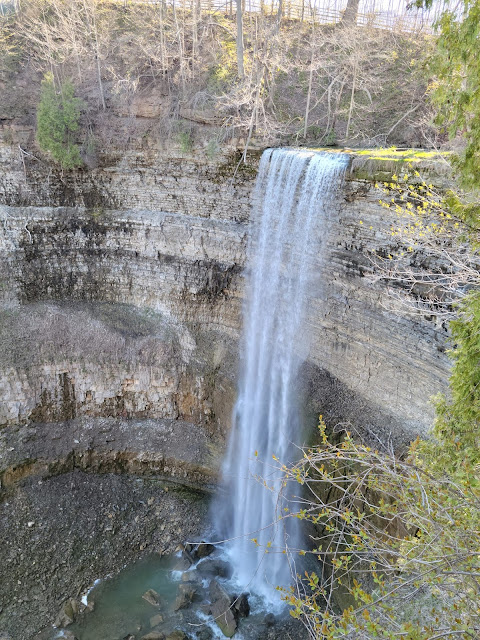 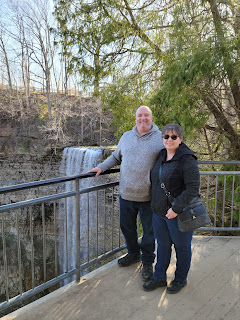 A wonderful day. We'll be back to Hamilton: there are at least three dozen more easily accessible falls to view, not to mention the lookouts from Hamilton "Mountain". Further road treks are guaranteed; the where of them will depend on gas prices and whim.
"Boldly going forward, 'cause we can't find reverse"...yeah. It applies.
Thank you, hon.
on May 09, 2022