The tri-city area in which I live is about the most confusing place I've ever seen.
For years, I lived in London, Ontario, which is laid out on a nice simple grid pattern. Granted, there are no expressways of any note in that city, so "grid" turns to "gridlock" in a hurry, but at least it's usually easy to remember where exactly you're stuck in traffic.
This place...
First, there's the nomenclature. I live in Waterloo, which has been surgically grafted on to Kitchener: take the signs down and you'd never know when you leave one city for the other. Waterloo has a downtown core, but it's called "Uptown". Kitchener has a downtown, too--less than two miles away from "downtown" Waterloo.
Then there's Cambridge, towards which Kitchener-Waterloo inches, closer every year. Cambridge is itself a polyglot of three cities: Galt, Preston, and Hespeler. Outside their individual downtowns, there's nothing to distinguish any of them.

Two of the major arteries in Kitchener-Waterloo--King Street and Weber Street--run north, south, east, and west. "75 King Street" could be any of four locations, two of them within a couple of blocks of each other, the other two widely dispersed. And forget using a compass: even though Weber's supposedly running north-south, in reality it's close to east-west.
No, this is how confusing this city is: King and Weber parallel each other while they box the compass, but your grade four geometry teacher would be horrified: these parallel lines intersect.
Three times.

Given such a confusing mishmash, it's little wonder at least two of our three city councils are similarly befuddled. I'll leave the failings of Waterloo council for a future post. Today I'd like to talk about Kitchener and its Mayor, Carl Zehr.
Our happy little haven made the front page of the National Post today. Above the fold, no less, this picture: 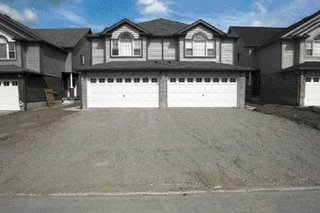 See this house? As of next year, anyone building one like it in Kitchener will be breaking the law. The issue--which only became an issue after Hizzoner drove down a street and happened to notice it--is the front-facing double car garage. Zehr thinks a whole street of these 'snout houses' is overkill, an eyesore. As it so happens, I agree with him--a wall of garages is kind of ugly. But I find many things ugly and though I'd often like to, I don't clamor to have them banned.

"It's about quality of life, eyes on the street and making sure that people could interact in their front yards," Zehr said. Well, humph. I'll tackle these objections in reverse order.

'MAKING SURE PEOPLE COULD INTERACT IN THEIR FRONT YARDS'. As opposed to, say, interacting in their back yards? Is that a bad thing, now? What's next? Are we to have city-mandated get-togethers every third weekend?

'EYES ON THE STREET'. Take a good look at that house up there. Note the large window over the garage. Each half of the semi has one. Do you think the people who live in these houses can look out the window every once in a while and see the street below? I do.

'QUALITY OF LIFE'. All my life I've wanted a garage. Every winter while I scrape off the car in the bitter cold, I pine for one. Now, granted, ours is a single-car family, unlike most. The ecowarriors can talk until they're green in the face about the need to lessen our reliance on the automobile, and until somebody somewhere creates a public transit system that (a) is faster than a similar commute by car and (b) doesn't force people to sniff the armpits of strangers, reality will continue to rudely intrude on the pipe-dream.

--Semi-detached houses are an economical alternative to single detached houses. (The house shown above sells for $217,000 in a neighbourhood where the singles go for $295,000 and up.)

--Most families have two cars. (Whether or not they need them, they chose them and paid for them.)

--Most families would like to have somewhere to keep their cars: a double garage is a selling point. (In fact, many would say a double-car garage augmented their quality of life.)

--There's no room for a double garage beside most semis, and certainly not behind them. (Not unless you're willing to sacrifice all pretense of a back yard.)

--That leaves the front. Yes, your house resembles a car wash or a firehall, but...

...but sure enough, the community pictured above sold out before it was built. So obviously there's a market for these places, Mayor Zehr notwithstanding. "If builders are coming forward with houses and designs, it's because they've got a demand out there that they're trying to meet," said John Kenward of the Canadian Home Builders' Association.

There are times when government should interfere in market economics. This isn't one of them.

I do side with mayor Zehr on this one, but only because all those garages look butt ugly. Mabye if all those houses didn't have their front doors set back as much as they did I wouldn't have a problem with them either.. at least it gives some front to a house other than a garage door.

Oh, King and Weber also meet eachother twice, and at one point near Fairview Park Mall Weber Street turns into King Street mabye a kilometer past where King stops running at Highway 8.