Sorry for the unscheduled blog break. There may be a few more of these throughout the next few months as our store undergoes some much-needed renovations.
It was touch and go for the first year our store was open. (Then they hired me and their future was assured, ha-ha.) No, seriously, most people thought University Price Chopper wasn't going to make it. I knew better: there was a 7-Eleven across the lot.
Southland Canada doesn't close 7-Elevens often. I'd been the victim of one such closure, the year before, but even so I knew the phenomenal amount of market research that company puts into new store placement. If you see a 7-Eleven going in, it's a very good bet the area around it--whatever it might look like at the time--will be booming in five years.
And so it was. And so was the Price Chopper. Last fiscal year it was official: our store sold more per square foot than any other store in the chain, an award that came as absolutely no surprise to us.
We've been labouring in a store built for approximately half the volume we do. It has forced us to get creative. Milk is a good example.
A reminder that Ontario, by the standards of most of Canada and all of America, is weird: our 4L milk comes to us like this 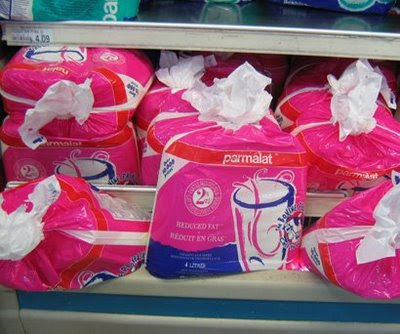 ...in milk bags, packed four to a crate, and 54 crates to a pallet. Because my cooler only holds eight pallets total, I'm often forced to pull all 54 crates off each pallet and handstack them eight crates high. This is, technically speaking, a safety violation: it's too high. No kidding, I tell every health and safety inspector who dares mention it. But the only alternative is storing some of this milk out here in the back room at room temperature...which seems, to me, to be a considerably larger health and safety issue. At which point he or she nods and walks away.
The biggest pet peeve working in a place so cramped is that you almost invariably have to move two, or three, or five, things to get the thing you actually need, after which you have to put everything back the way you found it, just in time for someone else to come along looking for the skid you just buried. There are times when I'm stricken with an urge to just start throwing things.
Anyway, five years ago we had an opportunity to expand--and our parent company balked at the price. A day care center moved in next door. Now their lease is up, and we jumped in. Renovations are slated to start in two weeks. No one knows when they'll finish, but when they do, I'll have almost double the space.
----------------------
Meantime...milk. (I knew I brought that up for some reason.)
Our gallons of milk retail at $3.97. I'm told by every American I see (and I see a surprising number, considering we're nowhere near the border) that this price is insanely expensive. It's actually pretty cheap, considering (a) it was the same price a decade ago and (b) each 4L bag costs us nearly $6. Nevertheless, that price is now standard across the city. Our only competitor, just down the road, is the only holdout at $4.49--and even they are losing a great deal of money at that retail.
Why do we choose to make milk--a staple item nearly three-quarters of our customers buy--a loss leader? Because (almost) everyone else does. Why does everyone do this? Because Wal-Mart does. Why is everybody so petrified of Wal-Mart? Damned if I know.
Digression: seriously, damned if I know. We don't have a SuperCentre anywhere near us, and Wal-Mart's overall prices (even at SuperCentres) really aren't anything to cheer about. And I will never understand the appeal of buying, say, a television where you get your groceries. For one thing, they don't make carts near big enough.)
Where was I...oh, yes, milk. We held out as long as we could at $4.29, still less than the Zehrs down the road, but higher than everyone else, including the drugstore two doors down from us. And practically nobody bought milk at that price. Then one week it was in the flyer: MILK $3.97 BUTTER $2.97 EGGS $1.97 BREAD $1.47...and our milk, butter, egg and bread sales doubled overnight.
Months ago, they came down with a new planogram for our milk counter. I took one look at it and snorted: they wanted me to take each individual 4L bag out of the crate and handstack it. Since these bags come four to a crate, complying with their wishes ensured it would take four times as long to stock milk.
The plus side: it supposedly increased profitability 25% (though I seriously doubt they factored increased labour into that calculation). It also gave me more capacity on my counter...always a good thing.
After an interminable delay getting new shelves, I went in last Wednesday on my day off and completed the planogram. One week in, I hate it. Oh, it looks great. But it takes so bloody long to fill it up!
Now they're enacting "phase two"...planogram to come down Friday. Oh, joy, I get to do this all over again. They've delisted 1L (roughly a quart) contains of regular milk. Now, if you want 1L of milk, you've gotta buy the filtered stuff, which regularly retails at twenty cents more. They've tried to ease the transition by putting the filtered milk on sale for six weeks, but in the end we're forcing consumers (usually seniors, who can least afford it) to abandon the milk they've been drinking for years and pay more for a different kind. I'm so sure this will go over well that I'm planning to call in sick every day for most of the next year.
In the meantime, blogging will be sporadic at best for the next while.
I've gotta go now, and stock some milk.
on June 23, 2009