Am I supposed to be impressed? 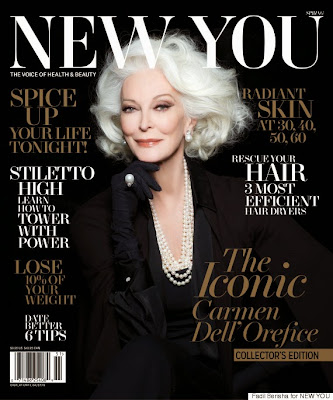 She's 83 years old. Doesn't look it, does she? The white hair aside, she looks considerably younger. Not a wrinkle on her, at least where somebody might see it. Radiant skin (no doubt helped with a generous amount of makeup). Ho hum.

Our society's obsession with youth continues apace. I'd have thought it would have started to fade by now, as the Baby Boomers hit retirement age. I should have known better. These people will get face transplants so they look younger in their goddamn coffins.

The first point I'd like to make about the "iconic" Carmen Dell'Orefice is that she's probably at least a millionaire, more likely several times over. People who conform precisely to our society's beauty standard tend to be handsomely rewarded. And maintaining this level of artificiality costs. A lot. It's therefore every bit as unrealistic to hope to look like this at 83 as it is to be a 90-pound, size negative-three twig at 33. Unless you're rich or a freak of nature, forget it.

And don't let the forgetting of it bother you in any way. Because how you look, especially at that age, isn't, and shouldn't be, important.

Oh, who am I kidding? How you look is absolutely critical in everything. We've made it that way with a multi-billion dollar make-up industry absolutely bound and determined to make all women everywhere feel less than real if they dare to appear real.
It's starting to spread to men, too.: check out the next cosmetics  section you see. Entire shelves of cheatery-fakery for the male of the species. If this keeps up, a few decades down the road he'll feel just as insecure about his outermost layer as women have been trained to feel for decades now.

It's everywhere. Do you know, when I was a kid, there was no such thing as tooth whiteners. Their history goes back quite a few centuies, but as far as my lifetime goes, they were all but unheard of until the late eighties. You brushed, you flossed, you used breath mints if you had to. Now, stripping the enamel off your teeth is all but imperative: I bet you your toothpaste tube has the word "whitening!" on it somewhere.

That's just one example. From high heeled shoes--which are hell on your body to ties, which serve no discernable purpose besides choking men, the emphasis is on style over substance. Sad.

And of course, it *is* much worse for women, in almost all cases. A new friend of mine remarked "we are not sellable if we're past our due date...so archaic but true."

I'll say it's archaic. Humans haven't been commodities for a long time now and the only "expiry date" on us is the day we die.
Just this morning I ran across someone online who was feeling unattractive and worrying her spouse might leave her for somebody who looked better. I hear things like this all the time...it's so maddening.  I explained my body philosophy for the umpteenth time--found here, if you're new in these parts--to which somebody responded:

This may be how it works for you. But for a lot of people bodies are extremely important. I can not imagine being with a person I'm not sexually attracted to. No matter how wonderful a person she may be.

To which I can't help asking: given your standards, what on earth are you going to do for sex when you're elderly?

No idea. It honestly bothers me. Then again there's always sex for money.

I find wonderful people attractive. What the hell is wrong with me?

See...in a sane society, we would venerate age. We would revere it. Parents would have the kids at a young age and grandparents, with their lifetime of accumulated wisdom, would take a very active role in raising them. There'd still be a thriving make-up industry, but it would be focused around trying to make people look OLDER and this more experienced and dignified. Grey, silver and white wigs would be common. We would look to the longer-lived to teach the world how to live...because they know. There'd be no such things as "old age homes", at least not the way they exist today, as storage drawers for the unloved and used up.  The idea of wanting to look younger would be seen as childish and mildly crazy.

Where is that world?

I find smart and funny attractive. Kindness too, I like kindness. I can't actually tell how someone looks until I know them.
On celebrities and perfection and such: when I was about to be 18 my mother asked what I wanted for my birthday. Being a cheeky and impossible child I said I wanted an ass like a centrefold. " oh?" she said, " you want an airbrush?"

karen: your mother is gold. And that line, "I can't actually tell how someone looks until I know them"...that's gold, too.

She is wealthy, has had silicone injections for the past 45 years and facial abrasions with steel brush blah blah blah...and had 5 marriages and 3 abortions...she has arrived at 82. That's what it takes to be a woman in the 21st Century--look what is being advertised, and what is on at the cinemas...we have been relagated back over 100 years and bondage. Men generally look for attractive and young...that's the law of the land.

I am continually ashamed of my gender. Males. I don't understand them. Even being one doesn't seem to help.

My mother was the first of her generation NOT to have her feet bound--and the first to wear Western clothes--and the first to be very well educated. She still looked at me in horror when I grew to be 5ft 7ins and my feet grew to a size 81/2~~~pretty normal for a European. She used to throw her hands up in horror and gasp in shock and call my father in to look at how tall I had either grown, or the fact that I needed another pair of shoes because I had 'feet the size as ships'. In hindsight it is very funny, except when I realize that I have very strange hangups and that perhaps, just perhaps, there is nothing wrong with me. But I was never allowed to get bruised or scratched, in case I got scarred in which case I would not be marrigiable at some later stage...so manythings.