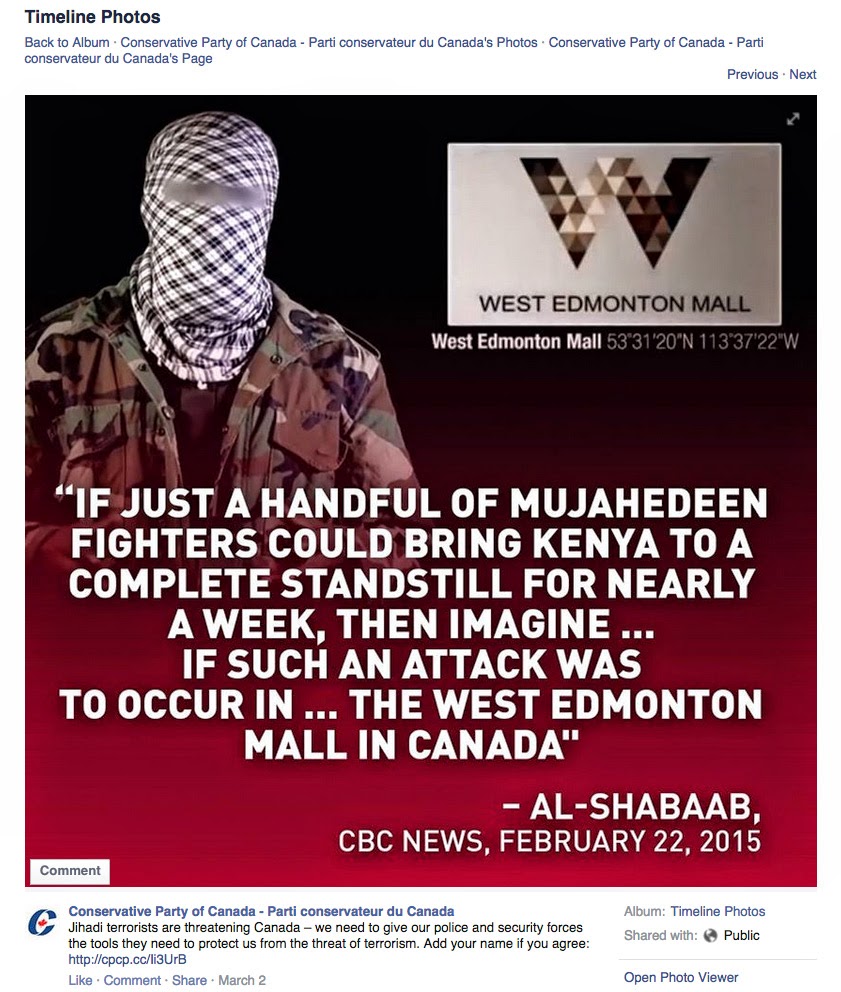 Text at bottom: "Jihadi terrorists are threatening Canada -- we need to give our police and security forces the tools they need to protect us from the threat of terrorism. Add your name if you agree"

This Facebook stunt was so egregious that even several Conservative MPs have spoken out against it. They still have their jobs, for now, but they better watch it. Dear Leader doesn't take too kindly to criticism. 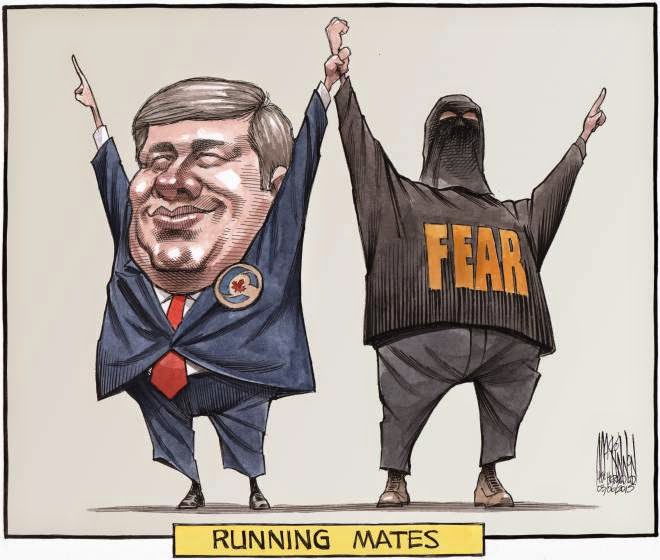 When reporters asked MP Peter Mackay what the government's working definition of "terrorism" was, he told them to look it up.

Here's the bill itself.  Outside of the title, The Anti-Terrorism Act, the word "terrorism" DOES NOT APPEAR in this bill.  That seems rather odd to me...but then again, this is the same government that reduced the number of environmentally protected waterways in Canada from 2.4 million to 162...in a budget bill. There's just no telling what might or might not be in anything the government sees fit to introduce.

But back to terrorism, since, you know, that's what this is supposed to be about. Off to the Criminal Code of Canada I go. Section 83.01 defines "terrorism" as a act committed

"in whole or in part for a political, religious or ideological purpose, objective or cause" with the intention of intimidating the public "…with regard to its security, including its economic security, or compelling a person, a government or a domestic or an international organization to do or to refrain from doing any act."

Hmmm. An act committed for a political purpose with the intention of intimidating the public. I'd say that Facebook post qualifies, wouldn't you?

To be clear, Somali extremist group al-Shabab did, in fact, issue a threat directed at West Edmonton Mall. And Mall of America. And the Westfield Centres in the UK, and the obligatory tacked on "Jewish-owned stores"...it always seems to be open season on Jews.
Al-Shabab has indeed carried out some of its threats in the past...in Somalia and a few neighbouring countries. And--oh-oh--Canadians and Americans have been dribbling overseas to join or aid the organization. They've been out-glamoured by jihadi-come-lately ISIS, but they're still drawing a few radicalized individuals.
We know who they are(pdf).

Using the tools we've already got.

Those tools we've already got have thwarted several terrorist plots. In fact, only two people have been killed by terrorists on Canadian soil in twenty years...and that's dubiously counting as a terrorist the Parliament Hill shooter, who begged police to arrest him before he committed his crime. Terrorists don't generally do that sort of thing.

So why are we madly rushing to fix something that ain't broken?

Because we're all terrorists now, that's why.

Here are six easy ways to break the government's anti-terrorism law. (NOTE: the site I linked to is clearly biased; however, the article itself is impeccably sourced with 29 links.)

Protestors can be considered terrorists in this bill if they "disrupt economic activity" or are "unlawful". Incidentally, to be unlawful, a protest need not be violent. It may be a peaceful protest that incorporates a blockade. It may be a wildcat strike. It may be simply voicing support for a foreign rebel group. WE DON'T KNOW. The Harper government is keeping its options open.

This bill opens the door to mass surveillance on a truly Orwellian scale. It gives seventeen different governmental agencies nearly limitless powers to collect data on anyone at any time for any reason that might be deemed "relevant" to national security. "Relevant". What's relevant? WE DON'T KNOW. Anything might be relevant. Hell, how you VOTE might be relevant. There's a pernicious thing going around Facebook that Justin Trudeau is a terrorist sympathizer because he has -- gasp -- met with Muslims. I can't say for sure, but I'd imagine 'meeting with Muslims" trips the alarm at one or more of those seventeen government agencies.
For those of you thinking Ken's gone off his rocker again and what the hell's the big deal, I've got nothing to hide...go read this and get back to me.

I don't trust this government. I was naive enough to do so at the beginning of its first term in office, but I have watched them cripple their own ability to gather meaningful data, hide completely unrelated bombshells in omnibus bill after omnibus bill, muzzle anyone or anything who dares to speak out against them, and repeatedly, intentionally ignore the Supreme Court of Canada--whose rulings they can't even dismiss as "activist" since Harper himself appointed nearly every judge in it!

Thank the Great Maple Tree for that Supreme Court, because it's likely going to find Bill C-51 every bit as unconstitutional as it has found everything else the Harper regime has tried to get past it. (You gotta admire the chutzpah: tasked with creating a bill to either legalize or decriminalize prostitution or at least make its prohibition constitutional, the government made it even more unconstitutional instead. Now they're asking for longer than the year the court has allotted them to draft legislation making euthanasia legal, not because they need the time, but because people dying with dignity offends their moral sensibilities.

I hope they won't get that yeart. I hope they're gone before the end of this  year.

I want my country back.