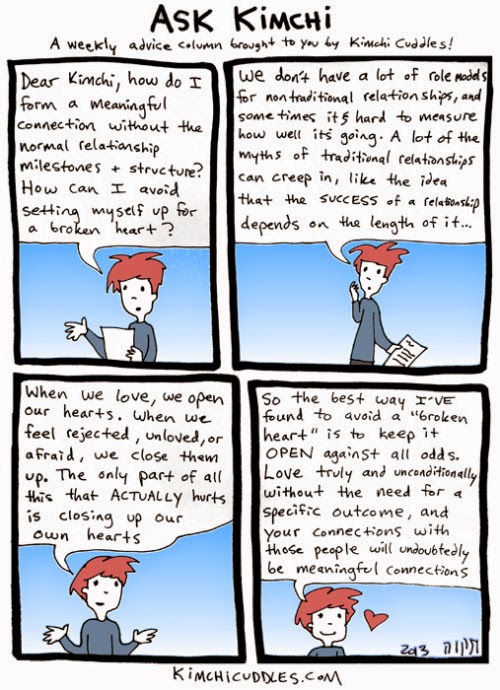 
I feel like writing another of these blogs, and it occurred to me that I never really explained why I am this way, what essential quality it is I have that makes me poly. I've talked about how I acted poly as far back as grade three, but never...why.


Kimchi Cuddles, above, explains it for me. I have an open heart. I always have had, and at this point I can state with near-certainty that I always will. Listening, feeling, and loving come natural to me, as natural as breathing.  It's my own relationship escalator, in that I can't take the first step (listening) for very long without being carried through the second (feeling) and into the third (loving). I have to be very, very careful with this. As inevitable as it is, for me, it's not inevitable for very many people. They have their own, much more heavily travelled, relationship escalator.

"Relationship escalator" is one of those cultural impositions  most people live through, and next-to-nobody stops to examine overmuch. It's a template for how relationships are "supposed" to go. There are a few minor variations on the theme--in particular, the "HAVE SEX" platform can come three steps higher on the escalator--but generally the idea is something like

Like I say, you can move the individual steps around (a little) to suit your morals, finances, or some other factor...but the fact of the escalator itself is very real, and something even strictly monogamous people can struggle with. If anybody has ever asked you if your relationship was "going anywhere"or criticized you for taking things too fast, or asked when when you were planning on having children...that's the relationship escalator at work. It's hard to overstate just how fundamental this is, and insidious. It starts right at that first step. If you're looking for a relationship, every person of the appropriate gender that you meet is run through the checklist to see if another step is in order. A single date is characterized as a "failure" if it doesn't lead to a second date, and a series of dates is a "failure" if the relationship doesn't develop further.

To some people, a committed relationship that is not a marriage is frowned upon. So is a marriage, like ours, that has produced no children. And there are actually people shallow enough to criticize you because you don't own your home.

There are two  unspoken corollaries. One, you're supposed to be happier at each step, and supremely happy at the top step, because that's what life is all about. That happiness is not defined by you, but by society: if you are happy, then you are working "forwards" and taking the next step; and if you're not doing that then by definition you must be unhappy.

Two, if you're not on the escalator at all--or if you're somehow violating the laws of socially-established relationship physics and appearing at two or more places on the escalator at once--well, let's not be ridiculous here. There's something seriously wrong with you...or you're being impossible. 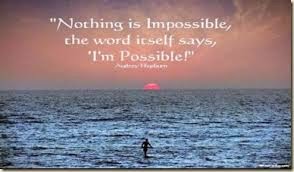 I have observed that while many people are perfectly content to ride the escalator, there are also many who are not. Not just people like me: people whose core raison d'être is their studies, or their vocation, or their art, and who don't have time for a relationship that insists upon more and more life space; people who are engaged in long-distance relationships; people in BDSM or kink relationships (which may have no sexual component whatsoever) involving someone other than the "escalator" partner...doubtless you can think of other examples. All of these people and many others are subject to interrogation and consequences for their "deviant" behaviour which may be mild, in the case of--for instance--not having kids...or anything but mild, if you deviate too far from the expected path. Just to use one example: the U.S. military has no room in its codes for polyamory. If it's discovered, it WILL cost you your security clearance and it very well COULD end your military career. I have heard of people who have been kicked out of their homes by offended landlords and there are many cases of people being disinherited.

(That's the "poly = cheating" equation at work, and it's remarkably pervasive and persistent. At best, somebody's been coerced into "letting" their partner cheat. That's not how poly works at all, but since the only known example of "more than two" in polite society involves cheating, that's almost invariably the lens people first focus on poly through.)

I'm near the top of the escalator--no kids here, but I've made every other step. Some of it happened remarkably quickly for Eva and I...I'll bet you don't know too many couples who bought a bed together on their second date, or who moved in together on the third. I am very happy to be up here after a little over sixteen years,  with the love of my life... and no matter what I say now, I'm pretty sure everyone is going to hear a giant "but..."

...which isn't there. Because we chose our relationship, and continue to choose it. Its resemblance to the traditional relationship escalator is purely coincidental. At every step, we did what felt right to us.

Eva and I are outside the box thinkers, Eva more so even than I am. For her, in fact, there is no box to be outside of at all. She can argue any side of any issue with impassioned clarity and sincerity. I'll never forget the first time I misinterpreted her zeal in debate for conviction. "Oh, I don't believe this myself at all", she said to me, "but how can I argue what I do believe without thoroughly understanding the other sides?"

Changed my life, that question. How, indeed? And sides, she used the plural. How many people automatically look beyond the "right" way and the "wrong" way?  How I love this woman.

Being outside the box people, we're also, despite being at (or near) the top of the escalator, not escalator people either. Our relationship is where it is. It is its own, (very) special, unique thing.

So are other relationships.

That's dsrawkcab-ssa thinking according to the society that brought you the relationship escalator. Of course the relationship is more important...the idea is to start shallow and deepen with time and the longer and deeper your relationship goes, the more "valid" it is.

Maybe that construction works for you. It doesn't for me. Relationships are what they are: you can have a deep, life-changing relationship that lasts all of an hour or two, and longevity of a connection is no guarantor of happiness: just ask someone trapped in a loveless marriage.

No, I think what matters isn't the relationship but the person. How can I best love the loves in my life at any given moment? I have this open heart. It beats. And it insists that each person is special and worthy of as much love as he or she can accept, respecting any other relationships that may exist.

And that's what comes naturally to me, what has come naturally to me since before I knew what a relationship was. I have always been drawn to material that echoed these sentiments: they resonate very deeply with me.

Keeping that open heart is a challenge, sometimes, in spite of myself. Sometimes, in the interests of love, you have to pull away, and that's anything but easy. Sometimes, my heart wants to close of its own accord; I'm not immune to jealousy, nor misplaced expectations, much as I hate how those buggers insidiously creep in.  Poly people do feel jealousy, by the way, almost all of us. We just recognize that its source and remedy both  lie within ourselves.

I have found that for me, the rewards of an open heart are worth the risks ten--no, a hundred--times over.

--Callahan's Law as expressed in The Callahan Chronicals, Spider Robinson
on March 08, 2015