Comparison Is The Thief of Joy 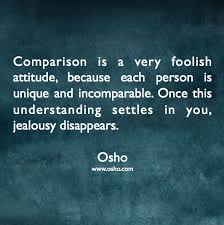 "Think of some miraculous thing. Any wonderful object, okay? The moment there are two of them, one is second-rate. Once there are three, one is mediocre and one is the worst. Comparison sometimes kills wonder..."
--Spider Robinson


All our lives, we are conditioned to compare.

We live in a consumer society. Now, as Spider Robinson ALSO says, there is a term for people who do not consume, and that term is "dead". But our world has increasingly defined us as consumers first and human beings second, and that's one of about ten million ways this world is seriously out of whack.

Walk down a grocery dairy aisle. Note the yogurt. In most stores in this province there are four major yogurt suppliers; in larger stores there may be three or four minor players on top of that, not counting the store's own brand, which is manufactured by one of the Big Four (and that last fact is often hidden by nondisclosure agreements; companies are loth to inform us that they produce the 'cheap knockoff', ESPECIALLY when the 'cheap knockoff' is IDENTICAL in every way to their own branded product).

It's a good bet that a yogurt aisle will have upwards of 200 different products in it. Our customers have one of two reactions to this. They either ignore it completely and fixate on their one preferred kind of yogurt, or they freeze and get flustered. The latter is generally the reaction of the elderly, in my experience, but it happens to everyone (including me)  twice a year when the entire counter gets mixmastered around, with new products added and some deleted.

We compare everything else. Which is fine. But we also compare people, and that can be problematic.

Social media is particularly bad for this. People tend to curate their timelines on Facebook very carefully, for two reasons: To present the best possible picture of themselves; and because airing dirty laundry is just gauche. And so, as the saying goes, we're comparing our blooper reel to others' highlight reels. It's one reason among many that I don't fully trust exclusively online relationships. Give me the person, not the pixels.

Comparison in relationships is not just problematic, it's potentially lethal. And poly people, who have less reason to compare than monogamous people, are guilty of it more often, it seems. We get insecure about our metamours. What has he got that I don't? I can't make him growl like that, how does she do it?

Thoughts like this are daunting. Some people would undoubtedly say that if you have a thought like that, you're not cut out for polyamory at all. This is, of course, nonsense. Nearly all of us have experienced the rather self-demeaning sensation that "they're better than I am". The defining factor, though, is the NEXT thought. Mine -- now -- tends to be "so what?"

I know I have qualities that I bring to the relationship table which few others possess, just as I know others bring qualities to the table that I don't have and never will. Likewise, my loves, though they have much in common, also have different qualities and they're each cherished for who they are.

One of the categories of queries that polyamorous people most often field involves comparison, to wit: "who do you love more?" All my life, I have found that to be a nonsensical question. How do you quantify love? Are there really people who say things like "I love you, but only a little bit?"

The people whom I love--be they lovers or friends or family--I love fully and completely. The love manifests in different ways, according to a bunch of factors, but there are commonalities. If I've told you I love you, it means, at a minimum, that I pledge to be emotionally available to you to the absolute best of my ability, now and forever. It means your happiness is essential to my own, to borrow Heinlein's definition. It means I am a safe space for you to be unabashedly yourself in. To me, it seems not just arbitrary but downright cruel to reserve this suite of emotions for just one person.

It ought to go without saying, but must be said anyway: Whether or not there is any physical component to that love is entirely up to you.

Now, there is a very common argument for polyamory -- I've used it myself, many times -- that states that one person can't possibly be another's everything, and further that it is unfair to place that burden on a single soul. I stand by that, while also suggesting that other polyamorous people may see things differently. (The beauty of polyamory, for me, is that it allows you to build your own relationships, using whatever rules and boundaries work for you and your partner(s).

"I'll be honest, I've never actually understood the "Can't be everything" opinion espoused so often here. Regardless of how many people I'm seeing, my partners are all "everything" to me. They're not in competition with each other, and they all fulfill me perfectly. There's not one person I would ever date who I wouldn't feel at least mostly fulfilled with in a monogamous context."

This actually IS my poly in theory, in the abstract. Not one soul mate, but soul leaves on the soul tree in the soul forest. In practice, though, respecting differences means appreciating them, and I have found that different people fulfill me in different ways, each very important, the total sum of each person thus just as important as another.

Manifest those four qualities around me and it's a safe bet I will love you. Notice, though, how elastic the latter three are. Empathy is empathy, it's either there or it's not, but the other three show up in all sorts of different ways. Intelligence need not be 'book larnin'. There are, after all, so many different intelligences. Ignorance is no sin to me. WILFUL ignorance very much is.
Resilience? We're all damaged. Well, most of us. The will to overcome that damage, to  become the next greatest version of the greatest vision you ever had about who you are...that's attractive.
Humour, likewise, comes in different forms, most of which I appreciate. About the only so-called "humour" I can't stand is based on, or intended to inflict, pain.

You can perhaps see now how my set of qualities can apply to many, many different people--many more than I have time and energy for. "Love is infinite; time is not."  Those third circle people are important to me.  Even if I've only met you once -- or we've yet to meet -- if I have said 'I love you' to you, it means the same as it does if I say it to someone at my center, or in the second circle. It's at least possible that, given time and circumstance, you and I could be partners someday. If we never reach that state, however, it does not lessen my love one iota, for you or anyone else.

I said all that to say this.


We DO compare. Of course we do. We're human. The trick is to learn to compare with DISCERNMENT rather than JUDGMENT.

You may think the two terms synonymous. They are not. JUDGMENT is “an opinion or estimate, criticism or censure, power of comparing or deciding”. When you judge something, you tend to use strong, inflexible language: "good, bad", "right, wrong". The word has a sense of finality about it, pending appeals ("but...but...I'm not evil!" --"shut up, I judged you evil and evil you are.")

DISCERNMENT is seeing someone or something clearly. And that tends to mean shades of grey, because let's face it, very few people are wholly evil (or wholly good) and "right" and "wrong" are rather subjective in almost all instances. I like to paraphrase Neale Donald Walsch here: "there is no right or wrong, there is only what works and what doesn't, given what you're trying to achieve."

Trivial example: whenever we go to my father's, we take the back way up through Orangeville. This adds probably 45 minutes to what is already a longish drive, and if the idea were to get up there lickety-split, that would be the 'wrong' way to go.  But if you have other considerations that outweigh speed (to you), the route we take, or something like it, is very much 'right'.

More serious example: You're not going to stress your way to a peaceful existence, by, say, taking the 401 through Toronto rush hour when there's a more scenic route up through Orangeville. So in that sense, stress is "wrong". It's why we're told not to sweat the petty stuff (but by all means go ahead and pet the sweaty stuff...mmmmm...)

But stress serves a purpose, or we wouldn't have it in our emotional arsenal. There are times it is good and proper to stress your face off.

Discernment is recognizing that certain people are better than others (for you, right now) at certain things. Note all the qualifiers there. Were I judging, I would say something like: "you are better than he is at _____, which makes you a better person."

Discernment is personal: it's what speaks to you. Judgment applies a set of external, often rigid standards, usually with no room for extenuating circumstances.

So yes, go ahead and compare your loves. You may even go ahead and say "he is better than she is at_______". Just so long as you don't go for the blanket statements. Because that kind of comparison really is the thief of joy.