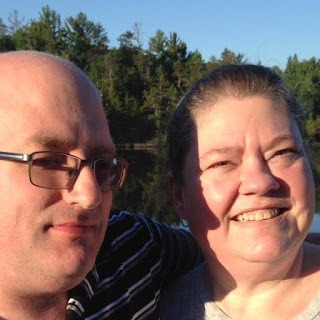 Eva was in the shower this morning -- our favourite talking grounds -- and I was musing aloud about what I could possibly write after all this time to commemorate our anniversary. "Tell them about the annoyances," she said, and I thought two things: well, isn't THAT romantic and also awfully short blog.
Oh, they're there, all right, for both of us. Ken can't seem to remember to put the lid on things, or (less of a problem lately) clean the outsides of things. (He just wrote "less of a problem lately" only to be confronted with a dirty pan, argh).  He's occasionally ignorant of his surroundings (perhaps "occasionally" is the wrong word; perhaps "often" would be a better way to put it). There are plenty others on my side, I'm sure.

Eva will create a little garbage pile within reach of the garbage can rather than use it. And...

...and that's it. There is no other quotidian habit of my wife's that annoys the ever-loving piss out of me.  In fact, there's only one other thing at all that frustrates me in this house on a regular basis:

And that's my failure, not hers. In seventeen years, I haven't gotten it through my dense head which wrong things can be fixed and which should just be left, despite Eva's complaint. It leaves me nonplussed and chagrined, already feeling stupid and called out for the wrong thing, but unable to make it right. Grrrrrrr.

I have to say, if sustained and serious thought concerning "what drives you batshit about your spouse" yields just two entries, there's a lot going right in your marriage.

We've done a LOT of living in the seventeen years since my dad led a conga line into the bathrooms and out on to the street on our wedding night. I've lost meaningful contact with two of the people who stood on my side at that wedding, and so has Eva with two people on her side. We have experienced delirious ups (the Disney trip for our tenth being the uppest of them so far) and more than a few crashing downs as well (navigating Eva's mental and physical well-being post-bariatric surgery has been challenging, to say the least, and she found my bout with depression difficult as well)
We've been comfortably well off and so financially tight that there was no breathing room whatsoever.

Through it all, there have been sustaining qualities. Looking back, the character of our marriage was set early on. We honeymooned at the Bonnie View Inn on Lake Kashagawigamog (I love saying that out loud) near Haliburton. One night from  that honeymoon stands out all this time later: she on the couch, me on the floor, playing Mad Gab and watching some really scary horror flick about an abandoned mental asylum.

If you haven't played Mad Gab, the idea is to figure out what "Ice Bank Mice Elf" actually says. Or--the one that still provokes cackles all these years later,

Something about those four words in that order struck us funny, and our shared laughter fed on itself until both of us were practically crying, shouting at each other "your nose hole is sitting!" Neither of us could figure out what the real phrase was ("No Soliciting"), probably because we were laughing so hard we couldn't breathe, and to this day, whenever we see a "no soliciting" sign, it must be said: "Nose Hole Is Sitting!"

The in-jokes like that are thick thick thick on the ground. Sources for them include our shared favourite authors (Spider Robinson, Robert Heinlein, Stephen King); shared favourite TV shows (primarily The Simpsons and the Seth MacFarlane universe); and what seems like dozens of different comedians who have filled our lives with laughter. Seemingly neutral phrases like "every once in a while" will cause grins every time. Each day is chock-full of excuses to smile.

We don't fight often at all.

At this point, there's not much to fight about, really. We know each other well enough to accurately forecast reactions to a wide range of stressors, and we're always there for each other to share pain and joy.  We have achieved equilibrium....peace...balance. We are good for and to each other. That's what keeps us going.

You're waiting for me to bring up others. So was she. In the shower this morning, after I'd poo-pooed the idea of writing about petty annoyances, she suggested I take as a theme "what keeps us together after all this time". I said, "well, that's pretty simple...I've got all I could ever want here." And Eva, always so quick to minimize herself, thought I was referring to our open relationship.

Other relationships are, as I believe I just said and have said all along, their own things, to be celebrated in their own time and space (and cherished every day, just as this one is).  In this marriage, we give and receive unconditional love, support, and acceptance. We have enriched each other's lives beyond measure, and I'd marry Eva all over again given half a chance.