The last time a a hashtag went viral on this topic, I was there with a blog. I'm here this time, too. 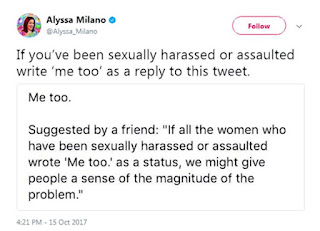 This triggered an AVALANCHE. And that's just the women who chose to come forward. I know MANY others who have not, yet who have confided in me about sexual assault in their history. As a man, I find this infuriating and deeply, deeply saddening.
I have tried very hard through my adult life to be a safe space, particularly for women. I was chatting with one woman last year, a long-distance friend whom I have yet to meet, and she let slip that she was surprised I hadn't sent her a dick pic yet. Or requested a salacious photo of her.  (None of our talk has EVER been even remotely sexual.) I reacted the way you'd expect me to react: flabbergasted. "I've never sent an unsolicited dirty picture," I said, "and I never will."
"It's funny," she replied. "You've treated me so well, I'd probably oblige if you asked for one."

That was over a year ago and I still haven't. Nor will I. There is a place for that kind of thing--within a relationship, and consented to ahead of time. But many men don't seem to grasp this.

Do dick-pics work? Better or worse than website ads? I've never clicked a website ad in my life and neither has anyone I know, but somebody must or they wouldn't be there. Are there really women who survey all the dicks on offer looking for the best one to ride? Somehow I doubt it.  But it sure doesn't stop men from sending them.

Warning: whatever your gender, don't read this if you want to keep your blood pressure down.

According to this article that was actually published in the National Review,

I'm not going to touch those last points just yet. I'd first like to goggle at the first three points.

They go so far as to 'prove' it's not misogyny by suggesting that homosexual men see MEN as sex objects, are they man-haters? (Ken would say: emphatically YES. If you reduce another human being to a set of genitalia, you are dehumanizing that person.) Or lingerie. What purpose does it serve besides turning a woman into a sex object? (Ken: a woman wearing lingerie is still a WOMAN, not a hole.)

We learn that "Every normal heterosexual man who sees a woman as a sexual object can also completely respect her mind, her character, and everything else non-sexual about her. Men do this all the time. "

Oh, really? A sexual object is something that a man feels entitled to. A man is NOT entitled to a woman, whatever his thoughts on the matter are. To the extent you see a woman as a sexual object, that's the extent to which you do not respect her as a fully fledged, autonomous human being. A sex object exists for your gratification. A PERSON....does not. If you need a sexual object that badly, try your hand. May I suggest you sit on it for a while first? That way it goes numb, and you can pretend the hand belongs to someone else. Until you shed this need for sexual objects, that's about as close as you should get to real, live women.

Let's go back in the mists of prehistory...before the 1960s. Back in those halcyon days, marital rape was legal. So was domestic abuse, to a point. Wives could not apply for credit without their husband's consent. Women were NOT equal partners in the vast majority of their relationships. This is the 'reality' some conservatives want us to return to, "when a man was a man and a woman knew her place".

Fuck that, says I. Fuck it sideways.

If I didn't hold the liberal belief, supposedly opposed to reality, that human nature is fundamentally good...I wouldn't bother with this. There'd be no point: if people are fundamentally bad, then we should just accept rape culture: "boys will be boys". No. People have the ability to learn. We've learned quite a lot just in the past century. Gay people are people. Black people are people. Women are people. Hell, we're starting to think maybe trans people might be people too. (Hint: they are.) Notice the common thread here? People are people and should be respected as such. This is not rocket surgery. The fact we have progressed as far as we have suggests that people CAN learn, notwithstanding the people who choose not to.

I'm going to tackle this in more detail later. It boggles the mind, the differences between the liberal and conservative mindsets that are laid bare in articles like this. We really are different species of human at this point, with vastly different perceptions of reality. But in the meantime, I have a suggestion for other men.

Other men: for one week, pretend every woman you interact with at work and out on the street...pretend that each of those women is in fact a man. Pretend HARD. Notice all the things you suddenly don't do. You likely don't feel the urge to talk down to another man. You certainly don't tell him he has a nice cock. I doubt you automatically think that the 'man' over there wants you to fuck him, and I'd imagine you wouldn't say anything to that effect. In short, you don't see men as sex objects. Stop seeing women that way.

And women: This man accepts his share of the blame for not doing enough, for not calling out every instance of rape culture he's run across (and there have been many). He resolves to do better. He understands that when you say "#YesAllMen", you don't mean him--but you could, if you don't know him, and that's the point. He promises to stand for, and with, you, and to respect your autonomy and agency utterly.