Walmart has a very strict ethics policy that prevents employees from accepting any item or service given to them by a customer or representative. Most places have something like this in place to prevent conflicts of interest or the appearance of same.

It wasn't always this way. In previous jobs I held, gifts and incentives were commonplace. Right around this time of year I could count on a pocket calendar from one company, a wall calendar from another, assorted and sundry gift certificates, and occasionally something of real value. (That Fisher Space Pen I got from Natrel one year lasted longer than any ten pens I've ever had, combined).

High Liner used to give out $75 in Canadian Tire gift cards for each display of their product. My bunkers and endcaps were always spoken for, so I never built a display of fish for $75. Not once. But each time High Liner would appear in the flyer, sales would be such that I was OBLIGATED to build an auxiliary display. High Liner didn't care whether they were advertised or not: one display = $75.

Should I have accepted these things? There's no question in my mind that I'd be instantly fired for doing so today. Fired and probably executed for good measure. Then?

I kept my conscience in check rather easily, actually. If confronted, I would have said, "hey, I was going to build this display anyway....if they're going to give me money to do something I had to do, how exactly is that different from you paying me every two weeks?" I was never confronted, probably because this behaviour used to be entirely normal.

Kind of the way it is in politics. But of course in politics, instead of a Fisher Space Pen or a gift card, it's a few hundred thousand dollars. Sometimes into the millions. Here, just take this. No reason, ha-ha, except now you're bought and paid for.  It's astonishing how expected this is, how utterly above reproach it seems to be. It's simply The Way That Things Are Done.

If Walmart and many/most/damn near all other retailers have a policy in place to prevent personal enrichment and conflict of interest, how is it that politics DOESN'T?

The front page of Reddit right now is riddled with headlines like "This is my senator. He sold me, my fellow North Dakotans, and this nation to the telecom lobby for $215,000." Net neutrality is going to spawn its own blog post in the not-too-distant future, but for now I'll just say this: I've yet to hear a convincing argument against it. I mean, seriously, there's not one thing you can say that would entice me to vote against my constituents' interest like th--

Marijuana is another topic that's going to spawn probably a few blog posts, and soon. For now, I'll just say this: there is no compelling reason to keep this plant illegal. In fact, given the many, many diseases that this drug effectively treats, it's a crime that it's been illegal as long as it has. Countless lives have been ruined, and there is real bitterness I feel on behalf of all the (predominantly minority, of course) people rotting in jail for dealing the stuff while white businessmen (including a former top cop who doubtless threw quite a few of them in jail in the first place) are now opening marijuana businesses to great fanfare.

Aside: Fantino once compared legalizing weed to legalizing murder. It's clear from the linked article that he feels differently now, just two years later...because weed will now be legal, see.  He's clearly one of those Conservative types who believes that anything illegal is bad, by definition. Me, I feel very differently on this: many legal things are VERY bad, and more than a few illegal things aren't bad at all.

And if you wonder, like me, why the United States shrugs its shoulders and sighs every time somebody exercises their Constitutional right to shoot up a church or a kindergarten or a movie theater or a country music festival or a...or a...or a...behold your answer: the National Rifle Association pays politicians not to give a shit.

Problem after problem,  ripped up solution  after ripped up solution, the allure of money in great quantities is holding humanity back.  Every special interest is in there fighting to be preserved...and paying off whomever they must in the process.

What's astounding to me is that you can track every dime given to politicians. They don't even bother to keep it a secret. No shame. None. Ask how this can possibly be legal and you get a whole lot of craptrap about how vital the process of communicating information to politicians truly is. Yeah, but...I keep hearing that information longs to be free. Seems like this kind of information is rather expensive. How expensive? Make me an offer.

And sometimes it's even more blatant than here, take this money. The government (this administration in particular, but all of them are guilty) seems to award appointments to the worst possible people. The former head of Verizon is now in charge of the FCC, and from his stance on net neutrality it's crystal clear he's still on Verizon's payroll in one way or another. The head of the FDA is a former hack for Monsanto, which along with Nestlé Foods is one of the most evil corporations on the planet. This, too, is so commonplace it's virtually ignored. 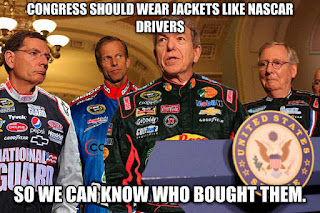 I, a lowly retail peon, utterly insignificant, abide by ethical rules that are precisely the opposite of those politicians are required to respect. Something is clearly very, very wrong.