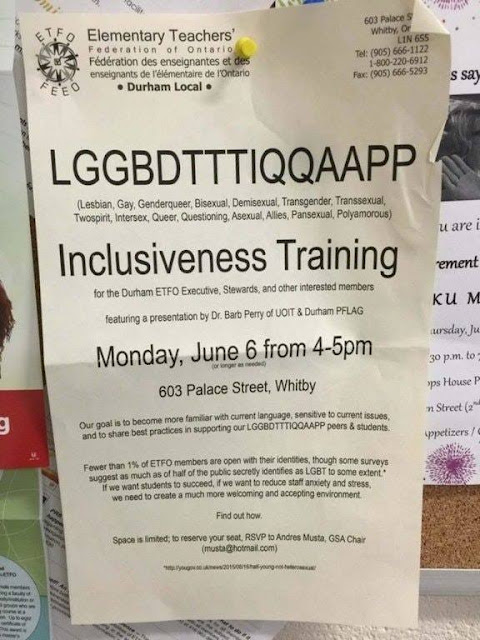 I don't feel it necessary to get my bona fides out front here: if you don't know I'm inclusive, if you don't believe I'm an ally, then let me know what more I can do, how much more supportive I can be.

This, though...I share, to some extent, the reaction of a very INtolerant person when I look at posters like this. To wit...I laugh, ruefully.

Well, that's not quite the reaction most intolerant people have, actually. Most of them seem to be angry. VICIOUSLY angry, in many cases. Particularly at the gender identity options.

I just stopped following a blog I've been reading for years--James Howard Kunstler's Clusterfuck Nation. Kunstler is the prototypical "doomer". He's been writing about the collapse of civilization since 2005's The Long Emergency. Through Kunstler I discovered John Michael Greer, so that's all right. But two things prompted my abandoning his blog. The first is repetitiveness: he basically writes the same column most weeks, long on what's wrong with the world and light on how to make it right; the second reason, pertinent to this blog, is his reflexive transphobia. Reading his entries over the last year, you might be forgiven for thinking that the reason the world is going to hell in the proverbial handbasket is that are these "people", scare quotes intentional, who dare to identify as something other than male or female.

Why this should be so threatening to so many people, I have no idea. It's far from new; transgendered people have existed throughout history, and in many cultures they are venerated and thought to possess wisdom that comes with a wider perspective.  But if you look at the vitriol being spouted today, you're left with little choice than to believe transgendered people are evil: circle the wagons! They've found a way for men to get into little girls' bathrooms so they can molest your daughters!

Okay, enough of that. Let's look at this sign promoting inclusivity training.

It started as simply gay and lesbian; then somebody remembered that there are people -- bisexuals -- attracted to both sexes. Then we added the T (trans) for people who bridge the genders in some way. By 2013 the acronym had expanded to LGBTQIA, adding "queer/questioning", "intersex", and "asexual" or "ally". And now, in 2017, we've progressed to LGGBDTTTIQQAAPP ... which, I'm sorry, at this point we're not doing anybody any favours.

I mean, yay, I'm included three times over! The "D" is for "demisexual", a person who is not sexually attracted to others absent an emotional connection. One of the A's is for ally, which I believe myself to be. And that final P is for polyamorous, which is different from the rest of the collection of letters because unlike the others, for most people polyamory is a choice.

So, um, thanks for that? But I can't help noticing this effort to be inclusive falls woefully short. I mean, Facebook has 58 different options for gender identity alone; in the U.K, it has 71. The acronym clearly needs more letters in it!

I mean, speaking purely logistically, as one of my friends just noted, "so many letters. I'd never remember all that". No kidding. Especially since you just know someb

There is great wisdom in understanding that most things, sexual and gender identity included, exist on a spectrum. The idea that things are unfailingly binary, that if you're not wholly one thing, you must be wholly its opposite, is very pervasive and even more damaging.

The problem is that rather than simply accept the spectrums, it seems as if people are bound and determined to carve out their own tiny slice of each one, give it a name, and defend it with their very life. This is sneeringly dismissed by the Right as "identity politics", as if all politics aren't concerned with matters of identity; but staking your entire humanity on one tiny piece of nomenclature can make you come off like a zealot.

I can't help but think of my friend Jason, who represents the very first letter in that acronym (gay). He considers his gayness to be the least important thing about himself, nothing to be celebrated (or shamed), just a point of being. I'm the very last letter (P) and in an ideal world this too would go without remark. So, in fact, would every other letter in that unwieldy acronym. I'm NOT suggesting we ought to erase anyone's identity; I'm suggesting that no matter what it is, no matter what word you choose to describe yourself, it ought not be the linchpin that holds your entire concept of self together. You are more than your homosexuality. I am more than my polyamory. They are more than their two-spiritedness.

Ultimately, we are all human. I do believe we sometimes forget that little fact in our rush to emphasize how special we are. Yes, we are all special...but none of us are more special than others. And while it's important to educate others on the perspective you bring to the world, again, you are more than one perspective...even if you only identify as a single letter...or none at all.